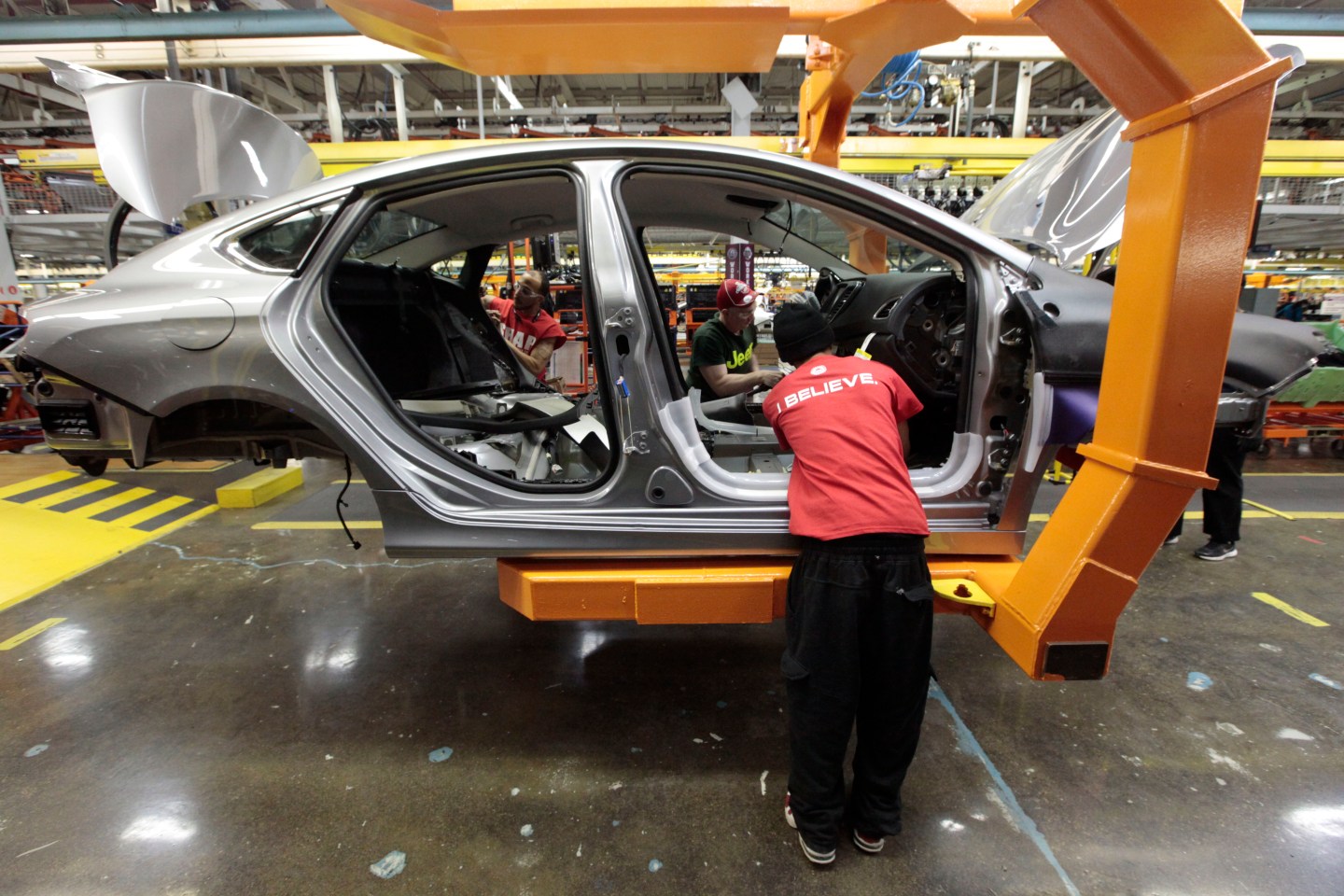 FILE - In this March 14, 2014 file photo, assembly line workers build a 2015 Chrysler 200 automobile at the Sterling Heights Assembly Plant in Sterling Heights, Mich. The United Auto Workers union is threatening to go on strike against Fiat Chrysler after its membership rejected a tentative contract deal with the company. In a Tuesday, Oct. 6, 2015 statement, Fiat Chrysler said that it received a strike notice from the union, and that it continues to work toward reaching an agreement. (AP Photo/Paul Sancya, File)
Photograph by Paul Sancya — AP

The auto industry avoided what would have been its first work stoppage since 2007 early Thursday when Fiat Chrysler Automobiles (FCAU) and the United Auto Workers Union agreed to a new labor deal for the company’s workers.

Just after midnight on Thursday the UAW announced on its Facebook page that “after a lengthy bargaining process, your UAW FCA National Bargaining Committee has secured significant gains in a proposed tentative agreement with FCA announced today.”

Neither side disclosed the agreements’ details. It will discussed in Detroit on Friday morning by the UAW National Chrysler Council, and its members will vote on whether to give it the initial go-ahead to face a ratification vote by the union’s rank-and-file.

FCA was under tremendous pressure on to reach a deal since the UAW on Tuesday said that if there was no new contract as of 11:59 p.m. on Wednesday, its existing agreement would no longer be in effect and it might call for a worker strike.

GM workers conducted a brief walkout in 2007, but the UAW hasn’t staged a lengthy strike against a Detroit auto maker since the late 1990s. As a condition of the government’s bailouts of Chrysler and GM, the union gave up the right to strike during its 2011 negotiations. The UAW isn’t subject to those restrictions in these contract talks.

The current pact between UAW and FCA expired on September but it was extended during ongoing talks between the two sides. They reached a tentative deal on September 15, but the union members dismissed it handedly with a 65% no vote—the first time UAW members had dismissed a national agreement in 33 years. That rejection brought the UAW bargaining members and FCA leadership back to the negotiating table.

The union members voted against the initial agreement because it didn’t meeting their main demand to address the company’s two-tier pay model. In 2007, as the Detroit automakers started to bleed cash, they struck a deal with the UAW to introduce a two-tiered wage system, which gave workers hired after 2007 as much as 45% less pay than employees who were hired earlier. The first deal would have given workers hired before 2007 a raise for the first time in 10 years, to nearly $30 per hour, and entry-level workers would have received wage increases to a range of $17 to $25.23 per hour.

The deal would have shrunk the pay gap between long-term workers and their entry-level counterparts, but it did not achieve what they’re really after: a full path for entry-level workers to transition to the higher tier—where average pay is $28 per hour—and a cap on the share of FCA workers who are relegated to the entry-level.

UAW workers will have to wait until Friday to see if the new deal brokered Thursday gives them what they want.