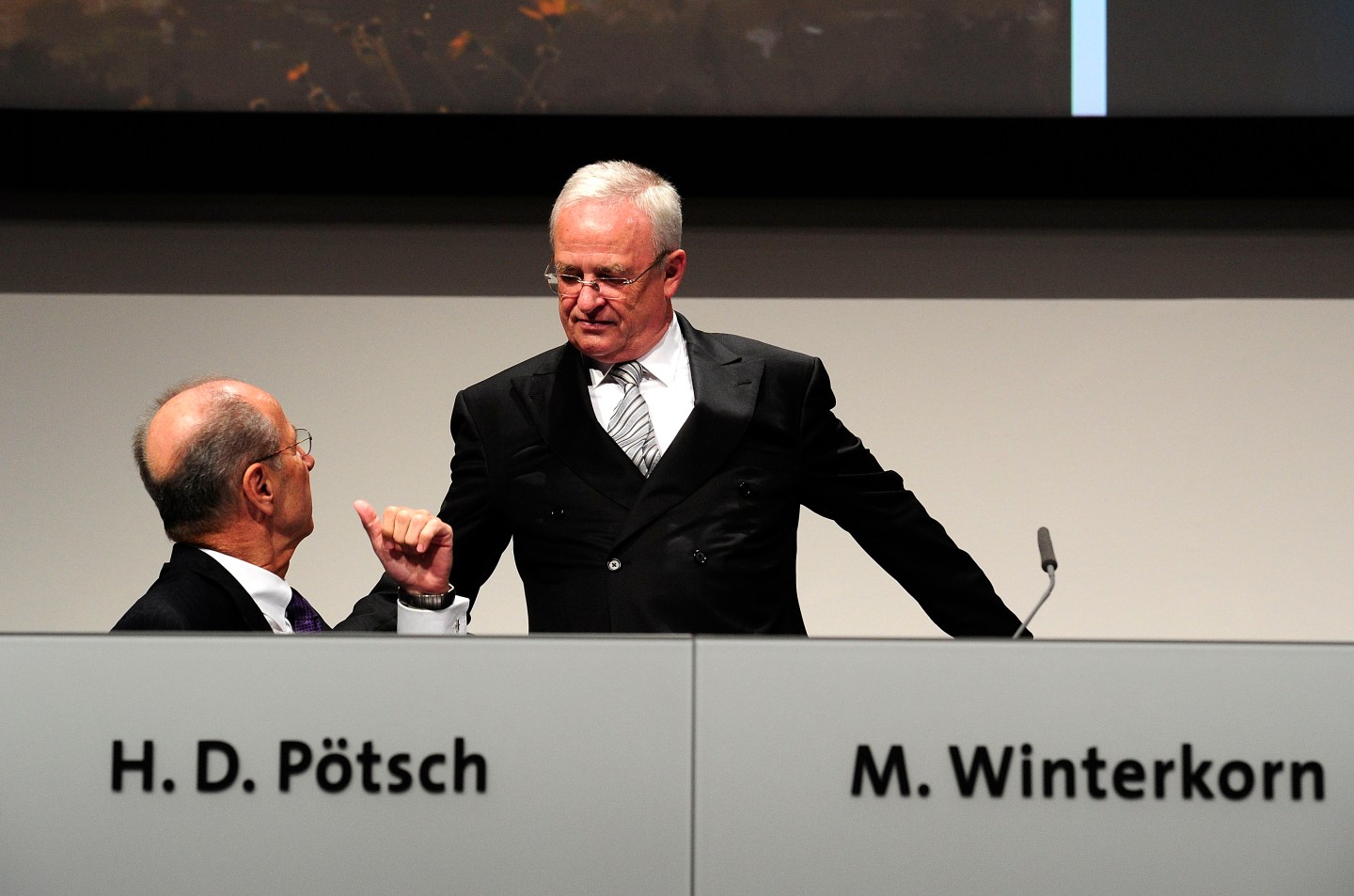 HANOVER, GERMANY - MAY 05: Volkswagen Group CEO Martin Winterkorn (R) greets Hans Dieter Poetsch prior the start of the Volkswagen annual general shareholders' meeting on May 5, 2015 in Hanover, Germany. Winterkorn recently won out in a power struggle against VW Group Chairman Ferdinand Piech, who stepped down afterwards and, along with his wife, quit his position on the VW supervisory board. Volkswagen Group, with its 12 brands, is Germany's biggest carmaker. (Photo by Alexander Koerner/Getty Images)
Photograph by Alexander Koerner — Getty Images

Volkswagen AG (VLKPY) said Wednesday it has moved up the planned appointment of Hans Dieter Pötsch, its long-time chief financial officer, to head its supervisory board with immediate effect.

It’s a strong statement of the German company’s commitment to Pötsch, who some see as the wrong man to oversee an investigation into the management practices that led to the scandal now engulfing the company. Pötsch has been head of the company’s finances since 2003, and many suspect that he could have had at least some knowledge of the fact that the group was systematically lying about the level of harmful emissions produced by its diesel engines.

So far, the company has indicated it’s pinning the blame on the engineers responsible for developing engines across the VW group: Ulrich Hackenberg, Heinz-Jacob Neusser and Wolfgang Hatz, who were the respective heads of R&D at the Audi, VW and Porsche brands, have all been suspended while the company conducts an investigation into the affair, according to Reuters. Martin Winterkorn, who stepped down last month as group CEO, had been responsible for R&D at a group level, but the board has accepted his claim that he knew nothing of the manipulation of emissions test results.

Pötsch had been slated to take over in April from Berthold Huber, who had been acting as chairman since the resignation in April of Ferdinand Piëch. However, the management thought it better that the designated chairman should take over as soon as possible. The appointment will need confirming at the company’s next shareholder meeting.

Pötsch himself promised that the board would “closely follow and support” the external investigation by law firm Jones Day LLP that it has commissioned, saying it will “literally leave no stone unturned.”

Pötsch’s appointment comes on the same day that VW’s new chief executive, Matthias Müller, said that the company expects to start a worldwide recall for the 11 million vehicles running the cheating software in January, and complete it by the end of next year.

VW’s shares appeared to have found some friends for the first time in two weeks Wednesday. Just before the close in Frankfurt, they were up over 7% amid a broader market recovery.