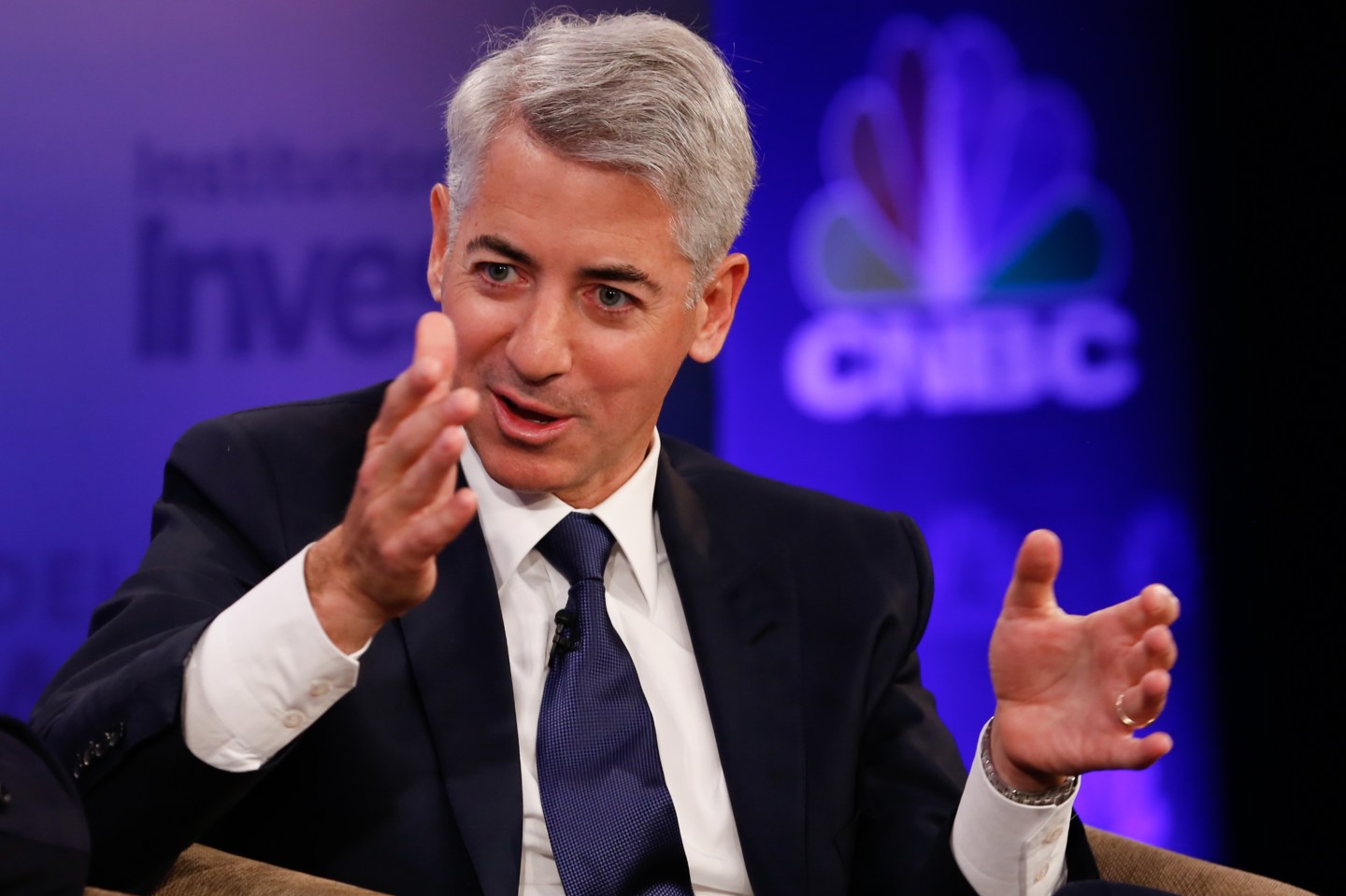 Drug maker Valeant has taken some heat recently because of its aggressive drug price increases. Congressional Democrats have called for an investigation of the company’s practices. And shares of Valeant (VRX) have tumbled nearly 30% in the past month on fears that its business model—which is built on buying other companies, cutting their R&D, and raising prices—is in jeopardy.

An analysis by Deutsche Bank found that Valeant raised prices on its brand-name drugs by an average of 66% this year, about five times as much as its closest peers. Most drug companies argue that they need those price increases, and high drug profits, to fund research to develop new drugs. Medical breakthroughs are costly.

But here’s the problem for Valeant: According to its income statement, it spends just 3% of its revenue on R&D, compared to about 15% to 20% for large drug companies. So the company can’t use the R&D defense.

Or can it? Bill Ackman thinks so.

The hedge fund manager, who owns a large stake in Valeant, says the company has spent tens of billions of dollars funding drug research. He says it gets no credit for that spending from critics because it is not listed on the company’s income statement. So, according to Ackman, Valeant has been unfairly singled out. In fact, if you believe Ackman’s math, Valeant goes from one of the industry’s stingiest companies when it comes to R&D, as critics contend, to one of the biggest spenders on drug research.

“Valeant doesn’t need to improve its business model,” said Ackman, speaking at a Bloomberg conference on Tuesday. “What it needs is better PR.” Ackman said he could help Valeant with its public image.

According to Ackman, Valeant has spent $40 billion acquiring drugs or drug companies in the past five years or so. Yes, Valeant often cuts R&D spending when it makes an acquisition. But when Valeant buys a drug from another company, it is essentially handing over new funding to that company or entrepreneurs to go and develop new drugs. Count all the money Valeant has spent on acquisitions as drug research, and suddenly it has spent 200% of its revenue over the past five years on R&D. Valeant is spending too much money on R&D.

Ackman’s argument is very Wall Street, and it’s one that’s spun about the stock market a lot these days. Recently, large public companies have been spending more and more of their money on stock buybacks instead of buying new factories, hiring more workers, or spending money on research. Critics say that is holding back the economy.

But others argue that all those buybacks are good news. Buybacks are one way companies return money to shareholders (put aside the fact that shareholders have to actually sell their stock to get that money). Investors can then take that money and re-invest it into some new startup that is growing, creating jobs, and making the world a better place. That’s the logic. But it doesn’t really work. Much of the money spent on buybacks goes to overpriced shares and stays there. Some of the buybacks are used to defer the dilutive effects of stock options. So the money is really going to executive compensation, not to fund new, growing companies.

Ackman’s logic doesn’t really work for Valeant either. About $30 billion of the $40 billion Valeant has spent in the past five years has been on large acquisitions. Earlier this year, for instance, Valeant spent $14.5 billion acquiring Salix. Only about 3% of its shares were held by company insiders, the biggest being the company’s former CEO Carlyn Logan, who had retired shortly before the deal was announced. It’s unlikely she is doing any major drug research.

The bulk of Salix’s remaining shares were held by institutional investors, large mutual and hedge funds. Nearly 10% of Salix was owned by a hedge fund run by John Paulson. The next biggest shareholder was Vanguard. It’s possible that Paulson and Vanguard decided to invest their gains into other pharma companies developing new drugs, but they are just as likely to put their money somewhere else. They are not in the business of developing drugs. They are in the business of making their investors’ money into even more money.

At the same time, Valeant said it was cutting roughly $500 million a year from Salix’s research budget. Those cuts don’t seem to factor into Ackman’s analysis. Even if some of the money that Valeant has spent on acquisitions has made its way into funding new drug research, it’s probably a small faction. Yes, investors get to choose which drugs and companies to fund, but who says they know more about what to fund than those who are actually in the industry. And Valeant’s round-about method of funding research, if that’s what it’s actually doing, seems a lot less cost effective, with all of the bankers and lawyers and hedge fund managers taking chunks of deals than if drug companies directly devoted a portion of their sales toward finding new drugs.

But if you believe in the magical world of efficient markets, as Ackman clearly does (with Herbalife, I think he would make the argument that the market is not nearly as efficient), then I guess you could make the case that Valeant’s acquisitions costlessly reallocate capital to the most promising new drugs under development. And that would be great. When have efficient markets ever led us astray before?