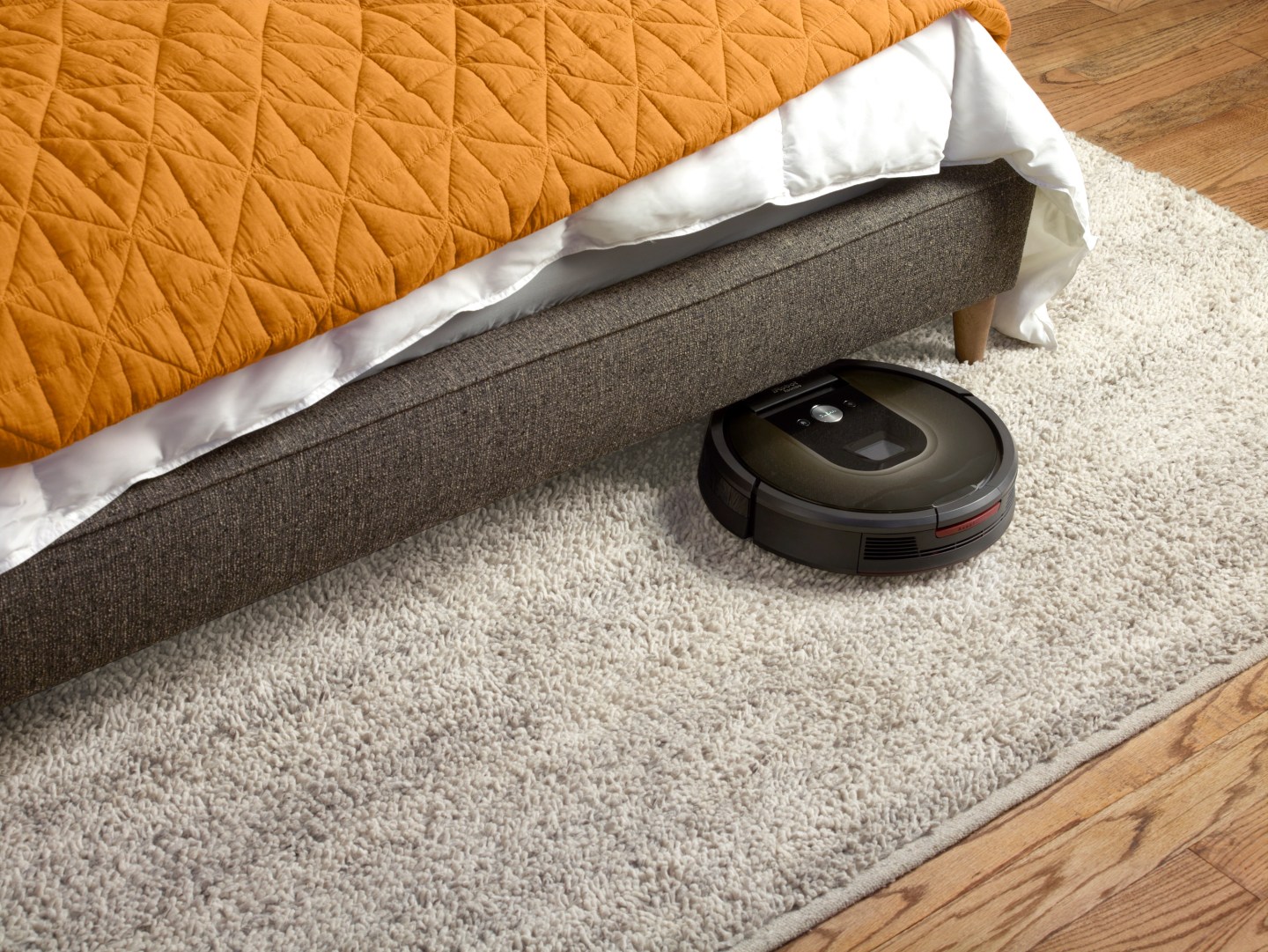 One of the most popular consumer robots on the market these days is the Roomba, with over 14 million units sold in the past decade. iRobot’s puck-like robotic vacuums bounce around your home in what appears to be a random pattern, bonking into chair legs and using sensors to guide it around walls.

The company’s Roomba 980 is the biggest upgrade to the robotic vacuum in over a decade. It’s the first Roomba that can connect to the Internet and be controlled by a smartphone app, thanks to a new built-in Wi-Fi modem.

Instead of blindly feeling around, this Roomba is equipped with a low-resolution camera to help it spot obstacles and features of your home like walls. With its wireless connection and the camera, the Roomba 980 will remember where it’s been, according to iRobot. For consumers, this should mean the Roomba 980 takes a more logical path through your home, and bumps into objects less often.

While the Roomba 980 is clearly the “smartest” Roomba yet, its new eyes and brain mean that it’s also the most expensive one yet, at $899, and not necessarily a better value than previous Roombas (or its growing number of robotic vacuum competitors).

iRobot says that the Roomba 980 uses a more powerful cleaning system that should be able to extract more dirt from rugs than its predecessors. In my experience testing it in my tiny New York apartment during the past week, the Roomba performance is nearly identical to that of previous Roombas, specifically the Roomba 880. In fact, the two bots share a good deal of parts, including its wheels and its main vacuum extractor.

One new feature on the Roomba 980 is that it can finish its job over two runs if your home is too big to be cleaned on one charge. The Roomba 980 lasts two hours on one charge, but will remember where it hasn’t cleaned if it can’t finish the charge. However the device’s battery life isn’t its limiting factor, but the fact that the dustbin is full, your floor isn’t big enough to require two runs, or the Roomba can’t navigate stairs or other changes in height.

One advantage to the new camera-based navigation system, according to iRobot, is that it takes a more logical path through your home. In my limited testing, it seemed to be the same old Roomba, bumping around corners and blindly feeling its way around my house. The new navigation system didn’t make the Roomba 980 better at avoiding obstacles — it often beached itself on the legs of my Ikea Poang chair, which was a documented problem with previous Roombas, too.

The Roomba 980 also has a new “dirt detect” algorithm, which essentially means when it finds an area with a large amount of debris, it will rock forwards and backwards until it’s all swept up.

The Roomba 980 is a formidable cleaner, and (depending on how skilled you are with a vacuum) will clean your home better than you can, especially if you use the new setting that asks the Roomba to do two cleaning runs at once. It certainly rid my home of cat hair.

Without a doubt, the biggest improvement in the Roomba 980 is that it includes a new app, which is available for iOS and Android. The app lets users easily set cleaning preferences, including whether the bot should do two cleaning passes or what it should do when its bin is full.

The app on iOS also makes it really easy to schedule your Roomba for daily cleaning with an interface that resembles an alarm clock. The app also gives you a handy history of recent cleaning runs, including how long they took, what the total area cleaned was, and how many times it ran into heavy debris.

Finally, by using the app you can tell the Roomba to start a cleaning run from anywhere. So if you’re on your way home, you can tell it to start before you get there. Although handy in theory, I found this feature to be a bit superfluous.

At home, I usually just pressed the cleaning button on the robot itself, and when starting a cleaning job remotely, often the Roomba ran into issues like a full dustbin or an obstacle it could not surmount — meaning that someone had to be physically in the house anyway.

The app isn’t perfect. It doesn’t support notifications, so you won’t receive a gentle ping when your bot has finished its job or if its bin is full.

On the second day of testing the Roomba 980, it ran over a cat toy, and the toy’s wire lodged itself in the robot’s left wheel and left it unable to move. Roomba recommends that you do a little bit of clutter cleaning before you turn on your bot, to prevent issues like this. However, in my case, my cat had hidden the cat toy underneath my bed and I had no idea it was there.

One of the nicest things about the iRobot app is that includes full instructions for troubleshooting issues, which include removing something caught in the vacuum chute or replacing a worn out side brush. Unfortunately, the app didn’t have a solution for my problem, which meant I had to call iRobot up.

iRobot comes with a one year long limited warranty for parts, and in my case was necessary since my left wheel was shot. I needed a new one, which was sent over in two business days. (As it turns out, the Roomba 980 uses the exact same wheel parts as the 800 series.) iRobot expects its users to often repair their own robots, so it was up to me to take apart the chassis and replace the wheel. Turns out, you don’t need to be an engineer to do minor Roomba repairs—all you need is a Phillips head screwdriver, about 20 minutes, and the guides provided by iRobot. All told, it was a positive experience, even though a full repair service could be a nice option for those who don’t want to take their robots apart themselves.

With any first-generation Wi-Fi connected product, you have to ask whether there are potential security issues. iRobot appears to have taken security seriously to avoid a hackable camera-equipped robot tooling around your house.

According to the company, the company designed the Roomba 980 to firewall its personally identifying information away from its Wi-Fi radio, and hired hackers to try to infiltrate data from its new models. “At this point, all of the information that the robot takes and uses making the maps is firewalled off on the robot and has no access to the radios,” iRobot CEO Colin Angle told Fortune.

Unlike previous Roombas, the 980 can update its software over the Internet through your Wi-Fi network, which means that iRobot could add features to its robot after it’s been purchased.

The Roomba 980 uses its camera to make a map of your home, and there are applications for that data which could make it the glue that keeps your smart home together. iRobot is investigating how to share the mapping data with other smart products. For example, according to Angle, iRobot can integrate the Roomba 980’s mapping system with, say, a certain brand of connected light bulbs. This could create a system where users can help configure connected light bulbs based on which room they’re in thanks to Roomba’s mapping data. “What we launched with Roomba 980 is a major entrance into the Internet of things,” Angle says. While potential uses for the data could be game changing, iRobot still wants to take it slow and ensure when it does start sharing mapping data with other companies to automate your home, that it has its permission from its users.

“You’d want people to say, ‘use my Roomba data for light bulbs,’” Angle says. Although iRobot is keeping quiet on smart home integration for now, it’s very much in the company’s roadmap, and at the moment, the Roomba 980 is the only model up for the job.

Is it worth the price?

For the first time, you can give your Roomba 980 a name, through its app, humanizing the little robotic servant cleaning your filthy floors. It’s also handy for households with multiple Roombas that need to keep them straight.

For most people, the Roomba 980 is overkill. There are other, less expensive Roombas that can clean just as well, even if they’re not quite as smart. But if you’re invested in the smart home, or simply want the most future-proof Roomba, the Roomba 980 is worth the price.

For more on Roomba, check out the following Fortune video: