Leaving China out of the TPP is a terrible mistake 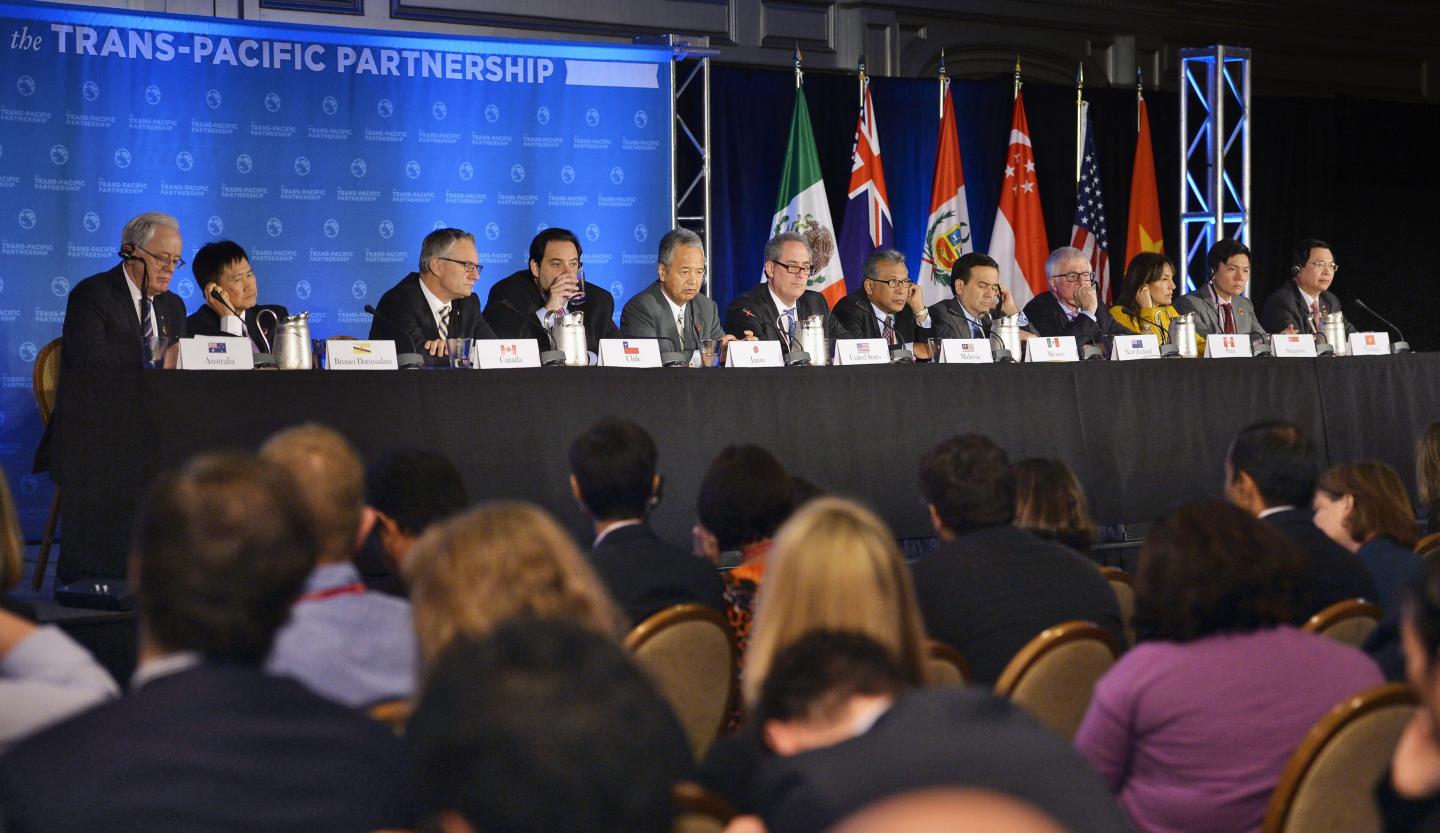 Representatives of Pacific Rim countries attend a press conference in Atlanta on Oct. 5, 2015, after they concluded a sweeping free trade deal. After years of talks, the United States, Japan and the 10 other countries reached a broad agreement on the Trans-Pacific Partnership initiative, which covers around 40 percent of the global economy. (Kyodo) ==Kyodo
Photograph by Kyodo/AP

Trade ministers from the U.S. and 11 other countries around the Pacific may have reached a long-awaited trade deal on Monday, but plenty of questions and obstacles remain as Congress considers whether to approve the Trans-Pacific Partnership.

Those trying to drum up support say the TPP would help the U.S. counter China’s influence over the Pacific because it’s not a partner of the trade deal. This argument might sound good on Capitol Hill and in other policy forums, but it’s incredibly flawed for many reasons.

For one, it’s naive to believe that China can be locked out of a preferential trading network. Despite its present currency and stock market corrections (all part of the transition to a “normal” market­based economy), China recently overtook the U.S. as the world’s leading trading nation and it is determined to become the world’s largest economy this decade.

By the end of 2014, China had invested $870 billion worldwide in an effort to expand its sources for raw materials and industrial components. For example, China’s investments in Bangladesh ($3.8 billion) and Pakistan ($17.8 billion) outstripped the loans those countries received from the IMF, which gives it a greater say in those countries’ economies and political debates.

What’s more, China has asked for a share of Angola’s oil reserves in exchange for its investment in that nation’s road development. This is in addition to its well-known, aggressive investments in mining companies across Africa. China is also pushing to create an international bank that would help finance infrastructure projects across the Asia Pacific; the Asian Infrastructure Investment Bank has the support of 47 regional and 20 non­regional members, including TPP nations, such as Australia, Brunei, Malaysia, New Zealand, Singapore and Vietnam.

Since 2005, China has been creating its own free trade agreements with many of the same countries involved in TPP, such as Brunei, Chile, Malaysia, New Zealand, Singapore, Peru and Vietnam. This is a crucial point in understanding the flawed logic behind any belief that China could be excluded from a preferred crossPacific trading community.

The result of all these diplomatic thrusts and counter moves could very well be the absurd and confusing emergence of two overlapping trading blocs that need each other economically, but distrust each other intensely. Wouldn’t it be far better to increase economic efficiency and improve political understanding with Beijing by constructing a TPP that includes China as a charter member?

And if one looks at the world’s supply chain, it’s clear that it’s impossible to leave China out of the world’s biggest trade deals. Given its investments in other developing countries, China has the capability to design, develop, and produce products that can easily make their way into the U.S. market via TPP intermediaries, thereby reducing tariffs it might otherwise have to pay.

For example, to satisfy certain country­of­origin conditions stipulated in TPP, China can manage the supply chain operations of cotton shirts by importing cotton from Pakistan (via its existing free trade agreement with China) and conduct “upstream” operations, such as fabric design, knitting and dyeing at home. Then China can ship the fabric to Vietnam (via an existing free trade agreement with China). At the same time, Japan can ship the buttons to Vietnam (via the TPP). Vietnam can perform “downstream” operations (sewing) and then ship the finished shirts via TPP agreement to Australia, Japan and the United States, cutting off the 5%, 10.9% and 16.5% import duties that would have applied if China had dealt directly with these countries.

Even if China failed to establish trade deals with the remaining five TPP nations and stays out of the partnership itself, the country can leverage its supply chains to facilitate multilateral trade with minimum tariffs. In fact, some mid­size Chinese companies, such as Texhong Textile, have opened facilities in Vietnam in anticipation of the TPP. Much as some of Wal­Mart’s (WMT) internal sourcing from Chinese operations to American consumers are considered Chinese exports to America, Texhong’s internal sourcing of semi-finished garments from China to Vietnam and then onto the U.S. will appear as trade between the three countries, covered by free trade agreements.

Worse than just being unrealistic and uninformed, excluding China from the TPP exacerbates political tensions between the world’s two leading economic powers. Even as they find a workaround, China’s leaders don’t exactly appreciate America’s efforts to exclude them from the trading party. And they’ll make their own moves to outflank the TPP.

China’s importance as Asia’s manufacturing hub, and as America’s top trading partner across the border, are facts of life, ones that can’t be contained or wished away. Whatever other issues are raised by the TPP debate in Washington these days, it’s time to add a pretty basic one: Why exactly would America enter into a Pacific partnership agreement without seeking to include its top partner in the region?

Felipe Caro is an associate professor in decisions, operations, and technology management and Christopher S. Tang is a distinguished professor and Edward W. Carter chair in business administration at the UCLA Anderson School of Management.