Hundreds of teams are gearing up for the SpaceX Hyperloop competition 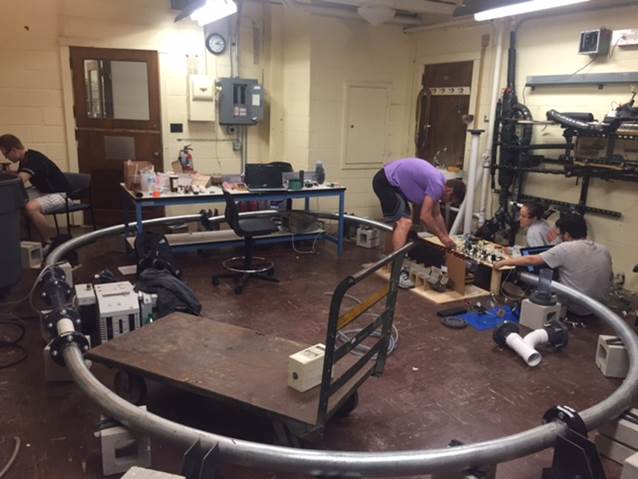 Across the country, teams are gearing up for the most anticipated engineering design competition in recent memory. As announced in June, Elon Musk’s SpaceX is inviting challengers to design early prototypes of pods that could travel through the ultra-high-speed Hyperloop system.

The deadline for entry was September 15, and more than 1700 teams have reportedly registered or expressed interest. That includes teams from Texas A&M, the University of Southern California, and even a team self-organizing through Reddit.

About 130 university teams have signed up, from 10 different countries, and SpaceX is giving them some extra support. Student teams that pass a preliminary screening stage in October will be invited to a design-workshopping weekend at Texas A&M on January 15-16, 2016. There, they’ll meet with corporate sponsors who will choose teams to finance and even collaborate with as they build their designs.

Dr. Greg Chamitoff, director of A&M’s aerospace research program and an organizer of the design weekend, says that in addition to team presentations, the event will include speakers, activities, and a variety of tech demonstrations from companies, and likely open to the public.

“Our intent here is to have a very exciting event at Texas A&M about the future of transportation,” says Chamitoff.

The final competition, open to both university and independent teams, will be at a SpaceX-built test track in California in June 2016. Pods for the competition won’t be full-size, but SpaceX’s initial requirements document says they’ll have to have braking, levitation, communications, and monitoring systems—though the test track itself will apparently provide propulsion.

Teams are still waiting to hear the exact specifications of that test track, now scheduled for release the week of October 5. That information has been delayed from an initial September release target (possibly because SpaceX is focusing on the fallout of the June 28 explosion of one of its Falcon 9 Rockets).

The spec is vital because the levitation systems usable by pods will depend on the tube. Most speculation about the Hyperloop has suggested that compressed air jets will be used to float pods. But some critics have argued that air bearings, which in current practical applications provide clearances of less than half the width of a human hair, could never work in such a large-scale application.

Alternatives include the use of wheels or magnetic levitation, but the feasibility of those ideas for the competition will hinge on the nature of the tube, and the initial SpaceX rules state outright that wheeled pods are “unlikely to win prizes.”

One team with a big head start is based in the University of Illinois’ Department of Mechanical Science and Engineering, where Emad Jassim directs the Undergraduate Program. Students there have been working on Hyperloop designs since 2014, and built a working scale model of the Hyperloop as a senior design project.

“[For the competition] we’re mainly focused on the capsule,” says Jassim, “Where before we were looking at the whole thing. I think that gave us some good insight into the issues associated with the design.”

Whether or not his team wins, Jassim says interest in the competition has been “fast and furious,” making it a big opportunity to get students excited about STEM fields.

For more Fortune coverage of SpaceX, watch this video: