British businessman injures over 20 in Porsche crash at motor show 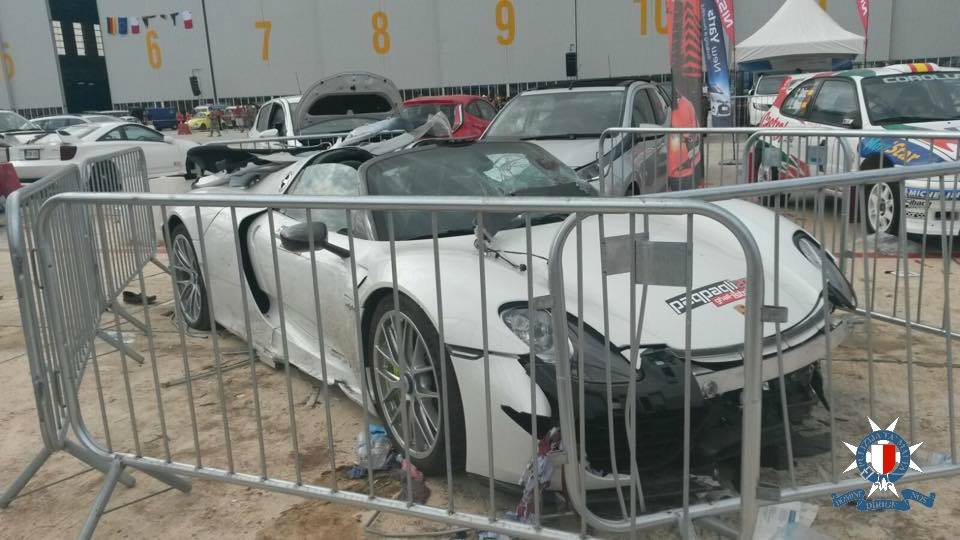 Today 4th October 2015 at about 1400hrs, during a motor sport activity known as Paqpaqli ghall-Istrina, a man of foreign nationality lost control of the Porsche he was driving and crashed in the barriers on the opposite side of the road, where several spectators were watching the activity. The vehicle hit several persons and stopped after hitting a number of vehicles which were parked in the area. Members of the Police worked in coordination with the Armed Forces of Malta (AFM), Civil Protection Malta and members from the Health sector, including paramedics and those at Mater Dei Hospital to assist several persons who were injured in the accident. Several persons were admitted to Mater Dei Hospital and the Health Centres. Details of the victims and their medical condition will be issued by the Health Department.
Courtesy of The Malta Police Force Community and Media Relations Unit

A British businessman injured over 20 individuals at a Porsche motor show in Malta after crashing the vehicle he was driving, the BBC reported Monday.

Paul Bailey lost control of a Porsche 918 Spyder at an airport taxiway at the Paqpaqli motor show when a wheel hit grass.

A six-year-old girl was among those critically injured in the crash, as well as four others who were placed in intensive care after the incident, the Guardian reported. According to the newspaper, a total of 28 people were injured in the crash, including the driver. They are reportedly in stable condition.

“I saw people thrown in the air, children on the ground, and women crying and screaming,” said Romanian photographer Christian Nicodimescu to Malta’s TVM.

As the Guardian reported:

Bailey and his wife Selena sold their phone conferencing business, Worldwide Group Holdings, in 2012 for £28m. Bailey, who is from the east Midlands in England, is director of Horsepower Racing UK, a company that hires out race cars. He is well known for his large collection of supercars, including an £866,000 McLaren P1 and £1.2m customised Ferrari.

The Porsche is among three supercars owned by Bailey known as the “holy trinity” after he became the first person to buy all three, with a combined value of about £3m.

The remainder of the motor show has been cancelled, according to the Guardian.