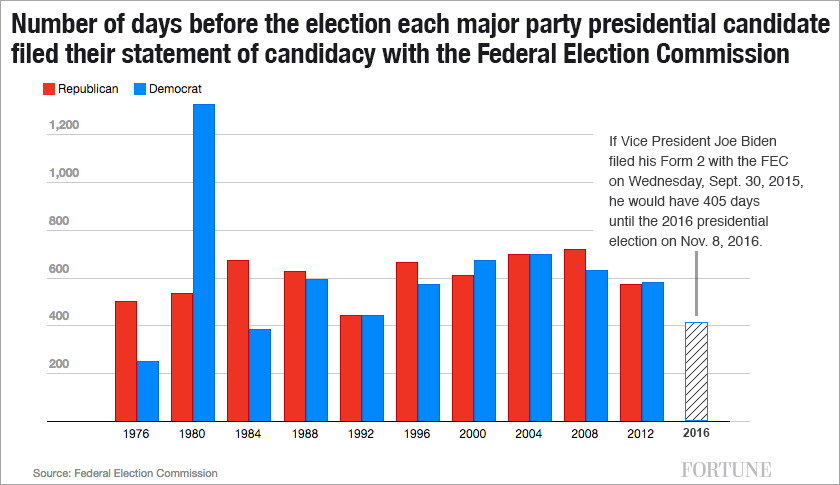 If it seems like Joe Biden is taking a long time to decide whether to launch a presidential bid, that’s because he is. In fact, he’s taking a historically long time. Since the two major parties switched to a primary system for selecting their presidential picks four decades ago, only Jimmy Carter in 1976 and Walter Mondale in 1984 announced later in the calendar and then went on to capture their party’s nod, according to a Fortune review of Federal Election Commission records.

In fairness, Biden is confronting an unusual mix of considerations. Perhaps foremost, there’s the question of whether he’s emotionally up to the task, only four months after the loss of his eldest son to brain cancer. The vice president has been strikingly candid in describing how he’s wrestling with his grief, telling “The Late Show” host Stephen Colbert earlier this month that he believes a presidential contender must be prepared to give “110%” to the quest. “I’d be lying if I said that I knew I was there,” Biden said.

Beyond that internal struggle, Biden must also confront a potentially prohibitive external challenge. Hillary Clinton’s campaign may look wobbly, but the former Secretary of State has piled up human and financial resources unprecedented for a nonincumbent. Burned by her collapse in the 2008 primaries, her operation has been girding for just the sort of longer-range threat a Biden run would pose. Whether it’d be possible for him to muster an operation to confront Clinton’s is hardly clear.

But increasingly, the clock itself poses its own problem. For better or worse, Biden doesn’t face a single hard deadline that will force a decision. Instead, he’s now approaching a cascade of mini-deadlines, each one making a competitive bid more difficult as it passes. First up, Oct. 13 brings the kickoff Democratic debate, hosted by CNN in Las Vegas. The cable network announced this week it would bend over backwards to accommodate the veep, allowing him to participate if he announces his candidacy as late as the day of the event. Then, Nov. 9 marks the filing deadline for the Arkansas primary — the first in a run of such qualifying dates. Over the following three months, opportunities to make the ballots in 19 other states will expire one by one. And by the time the New Hampshire primary rolls around on Feb. 9, if Biden decided to wait that long to see how Clinton faired in the earliest contests, his options would be constrained to point of foreclosure. That is, the contests for which he’d still be eligible likely wouldn’t offer enough delegates for him to mount a comeback.

There’s a silver lining for Biden in the historical record. When it comes to the general election, a candidate’s announcement date isn’t his destiny. Carter mounted the shortest presidential campaign in modern American history in 1976 — a relative sprint, spanning 251 days from his launch until Election Day — and emerged victorious. He followed it up four years later by kicking off the longest official presidential campaign in modern history, a marathon 1,324 days, and suffered a mortifying landslide defeat to Ronald Reagan. But as a pol who’s stoked presidential ambitions since his first run in 1988, Biden knows better than anybody that things change.