Super PACs are getting a terrible deal on campaign ads 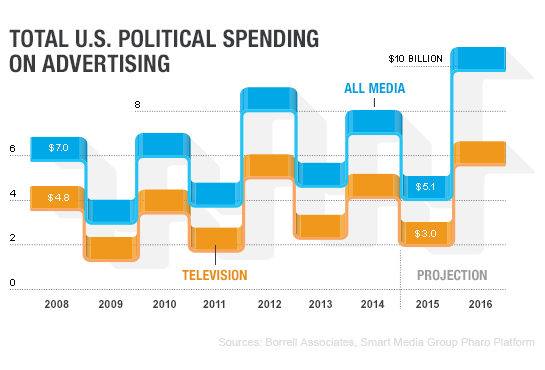 If you’re worried about the deluge of outside money in politics, here’s one small consolation: Big-spending Super PACs are getting a terrible deal on campaign ads.

When candidates buy TV ads for themselves, federal regulations (not to mention scruples) often limit how much the station can charge. For outside groups, though, it’s open season. “Who’s going to go weeping for the Super PAC that gets gouged?” says Elizabeth Wilner of research firm Kantar Media. Right now Super PACs might pay triple what candidates do for the same airtime. As the election heats up, it may be 10 times standard rates, Wilner says.

That’s good news for self-funded candidates like Donald Trump (if he ever runs an ad). It’s even better news for TV stations. So far in the presidential race alone, while candidates have booked $35 million worth of ads, issue groups have booked $82.5 million worth, according to Smart Media Group’s Pharo FCC-tracking platform, and the totals will continue to climb quickly. Though estimates vary as to how high they’ll climb, most anticipate total campaign ad spending on all races to reach well into the billions. The priciest booking so far? Pro-Marco Rubio Super PAC Conservative Solutions’ bid for a Super Bowl spot at $300,000. There’s plenty more where that came from.

All head shots via Getty Images

A version of this article appears in the October 1, 2015 issue of Fortune magazine with the headline “Growth industries TV and Super PACs: A love story.”