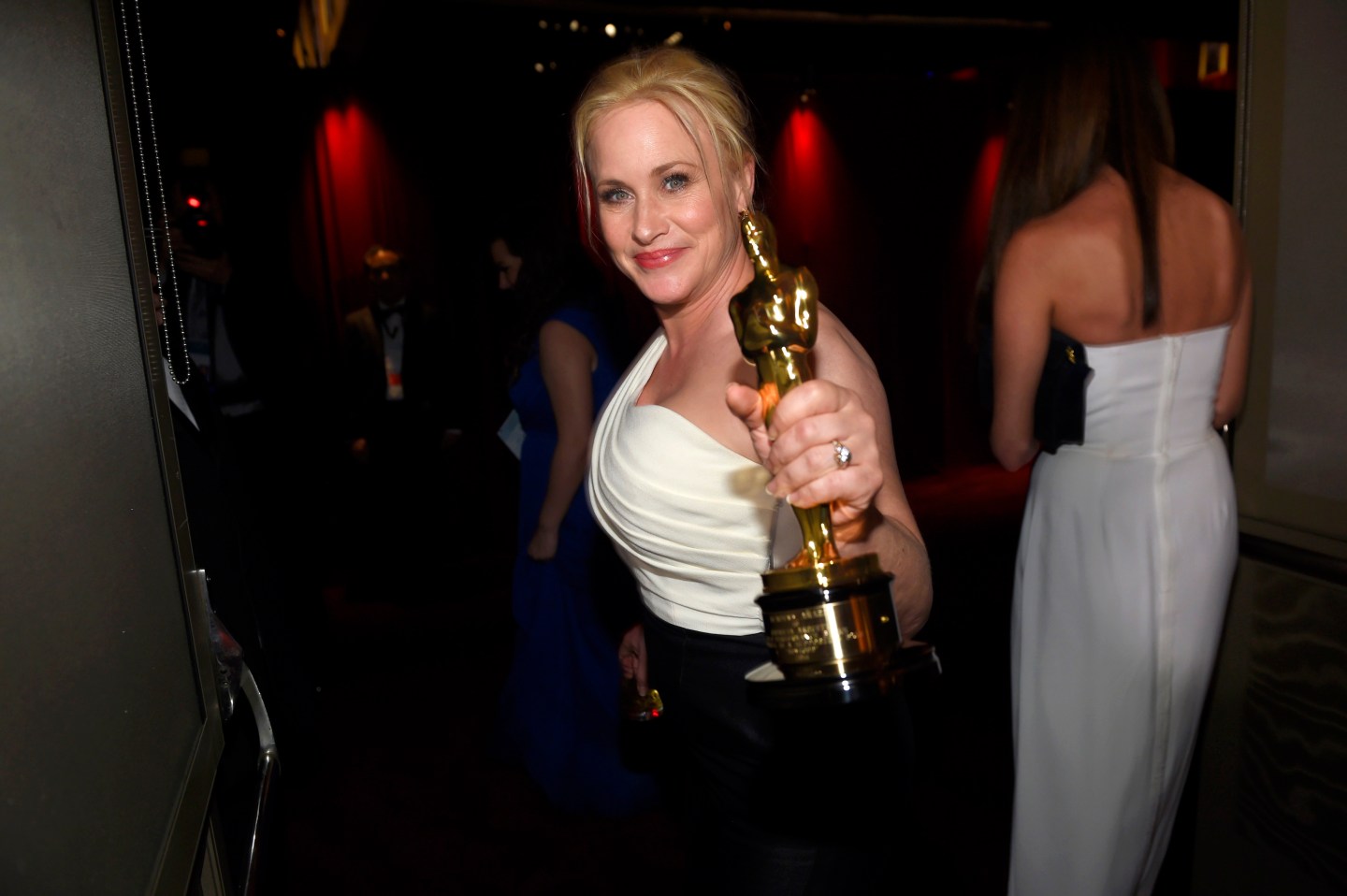 Patricia Arquette, winner of the award for best actress in a supporting role for “Boyhood”, attends the Governors Ball after the Oscars on Sunday, Feb. 22, 2015, in Los Angeles. (Photo by Chris Pizzello/Invision/AP)
Photograph by Chris Pizzello — Invision/AP

When Patricia Arquette won an Oscar for Best Actress last February, she famously skipped all the usual agent-thanking in favor of issuing a call for “wage equality once and for all, and equal rights for women in the United States of America.” Though her remarks stirred up controversy among those who thought she was sweeping aside the struggles of women of color and the LGBTQ community, Arquette’s message undeniably launched the wage gap into the public consciousness.

And Arquette hasn’t stopped speaking out about women’s income equality. In the months following her win, she’s become, somewhat unexpectedly, a vocal and busy activist with a pointedly inclusive message.

The actress, who currently stars in CSI: Cyber, has helped drum up support for California’s Fair Pay Act, which Gov. Jerry Brown is expected to sign into law. She’s appeared on stage at several conferences to discuss the issue, and will be the keynote speaker—as well as a participant in a Q&A with Anne-Marie Slaughter—at the Texas Conference on Women on October 15th in Austin.

Arquette received the Oscar, and a slew of other awards, for her work in Boyhood, and previously won an Emmy for her starring role in the TV series Medium. She’s appeared in more than a dozen films, including True Romance, Lost Highway, and Flirting with Disaster. Arquette is also the founder of GiveLove, a non-profit that has been working to rebuild communities since the Haitian earthquake.

She talked with Fortune about the stubbornly persistent wage gap (women still earn 79 cents for every dollar men make), the sexism she’s encountered in Hollywood, and her blossoming role as an activist.

The following conversation has been condensed and edited for clarity.

Fortune: Let’s go back to the Oscars when you spoke out about the wage gap. What inspired those comments?

Patricia Arquette: A lot of things came together around that time that made me want to do something. While I was working on Boyhood, which director Richard Linklater had written, we talked a lot about his single mother, and I thought a lot about my own mother. My friend Kamala Lopez was directing a movie, Equal Means Equal, which is a documentary on the status of women in America today and talks about all kinds of issues affecting women—wage inequality, domestic violence, rape. And there I was winning an award for a role about a woman who had to move her kids around again and again, and I was thinking about how her life might have been different if she had more economic stability.

Were you prepared for the attention that speech received?

At first it was overwhelming. I couldn’t see how I could work and be with my family and also do all the things I was being asked to do. But there have been incredible activists working on women’s issues for decades, and I thought what I could do was use my moment to call attention to that work, to help in any way I could. I have been an activist in other areas, but not in this way. But I don’t want [the wage gap to exist] for my daughter or anyone’s daughter. If I can help change it that will be the most important thing I do, other than raise my kids.

Why focus on the wage gap?

The inequality affects everything. It’s a web. We need to understand how destabilizing it is. We have to be more aware of how this issue affects women across the board. The pay gap happens in 98% of occupations, and it touches on every aspect of our lives. I just can’t see how we can have a healthy middle class without equal pay.

There is so much subconscious bias. Women have to pay more for health insurance, and we see that black women have higher rates of death from breast cancer because they don’t get care. I hear from teachers all the time that children come to school hungry on Mondays as they didn’t eat enough over the weekend. We have single mothers who aren’t earning a fair wage. And 40% of African American children are living below the poverty line. If you care about kids, hunger, or sexual abuse, if you care about any of these things, they are all related to economic inequality.

We are selling our daughters this phony-baloney story that they can go to college and be anything they want to be, but we don’t tell them they are not going to get paid as much as a man who does the same. They can get degrees, but will spend a longer time paying back student loans because they’ll earn less than men.

What’s your reaction to the attention being paid toward the status of women in Hollywood, from efforts to get more women behind the camera, and writing and directing, to hashtag campaigns for smarter questions on the runway?

The ACLU’s looking at discrimination in the industry, and that’s good. With the Sony hack we saw the disparity in salary, how very successful women were paid less than men at the same level, and that even less successful men were paid more. There is no way we can’t take that seriously. There are very few successful women in Hollywood, and that needs to change. I can’t complain about my situation, but it’s not common.

Do you think women’s issues are getting enough attention in the Presidential election so far?

Not at all. During the CNN debate I tweeted to remind them that more than half of the population is female. We have people running for president who don’t believe in abortion even if a woman’s life is in danger. They will put a fetus ahead of the life of a woman, of their wife or daughter. Politicians are afraid to dictate to business to pay women as well as men. But if we want a healthy economy we have to treat everyone—women, men and women of color, transgender and gay people—everyone, equally.

Are there are particular steps you’d like to see taken to help close the gap?

I think it is important for the [Equal Rights Amendment] to become law, which many Americans think is already the case. That would cause a shift. I think it’s important for corporations to do audits of their employee pay. They may think they are paying people equally but once they look at it they may find they are not. We have to encourage women, and men and women of color, to ask to be paid more. And we can all use our platforms, we all have them, to express our views. We can all talk to our friends and colleagues, and can use social media.

You’ve said you didn’t think of yourself as a feminist until recently. Why the reluctance?

I didn’t identify as a feminist. I just didn’t grow up with that. There are many different types of feminists and people have different definitions and ideas, but we all need to have a powerful, unified voice for women. We are a giant voting block and there is nothing wrong with demanding and having equality. It is easy to pick off a few stranglers from the herd, but when you have a herd of millions coming toward you it is a different story. We have to remember that we all share the dream of equality.

As an actress, you’ve taken some risks, such as moving into TV at a time when people thought it would harm a movie career, and taking you role in Boyhood in which we watched you age naturally over 12 years. Were those difficult decisions?

We live in a very image- and age-focused culture. We are teaching our daughters that all that matters is that they are this sexual ideal. A really strong thing for women in Hollywood is to hold on to the ingénue role as long as possible. But I wanted to get out of that gig as soon as I could. I pushed the boundaries as much as I could along the way. I remember a director telling my agent that it would be great if I could lose 10 pounds as long as my boobs didn’t get smaller. I didn’t want to lose 10 pounds and I didn’t. There were times I turned down movies when I needed work financially, when I had a newborn, because the roles were inappropriate, or the director was inappropriate or unethical. That is another reason I feel the way I do about gender pay equality. I grew up in a time when women felt they couldn’t make those choices, when women couldn’t leave bad marriages and battered women stayed with their abusers because they couldn’t afford to do it alone.