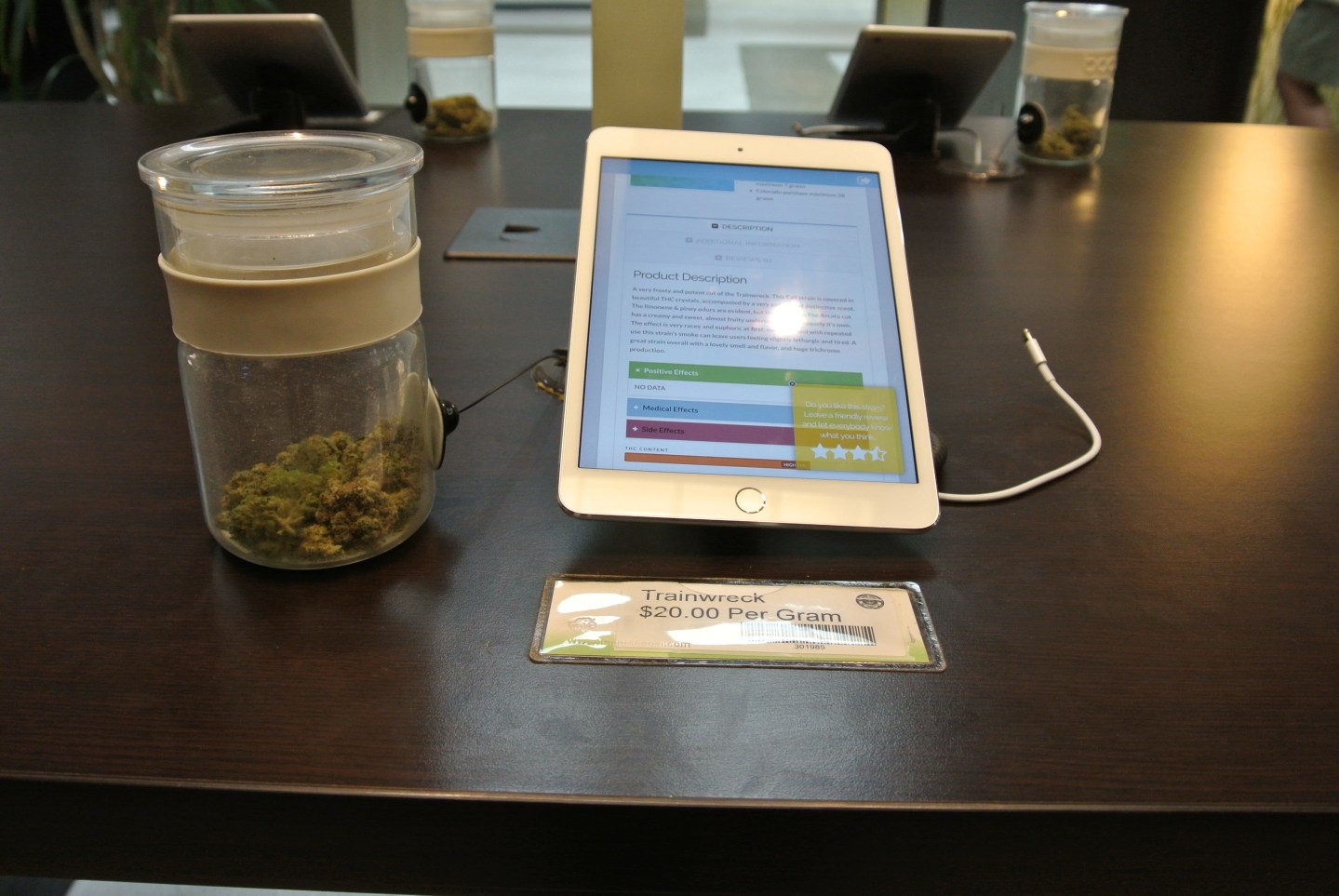 Beer may be the star of the Great American Beer Festival, but for some of the pilgrims who have traveled to Denver to taste the latest from storied brewers, there’s another draw: legal weed.

Five hours before the show floor opened at the Colorado Convention Center Thursday, there was a rush at Euflora, the nearest of 11 recreational cannabis dispensaries within a mile of the facility. Brewers and attendees of the show were shopping for pot-laced gummies and strains of weed with names like Great White Shark and Island Sweet Skunk. During last year’s GABF, says store manager Josh Sansburn, sales increased 20-30%.

Christian Hageseth, founder of Green Man Cannabis, says his downtown store saw an uptick last year too — significant enough that the store is offering a special on vape pens and concentrates to GABF attendees this year.

Colorado is one of the epicenters for the craft beer movement. The state is home to more than 200 breweries. And it was the first state in the country to legalize recreational pot. So it’s not entirely surprising that the two are connected here.

There is no such thing as a commercial “pot beer” for sale — that’s prohibited by law. But at the GABF, one brewer walked right up to the line, offering a cannabis-infused beer (made with legal hemp oil).

Long before marijuana was legal in some states, craft beer and pot have had at least loose ties to each other. Lagunitas Brewing Company, in 2005, had its brewer’s license suspended after police made marijuana arrests at the brewery in an event that has come to be known as the St. Patrick’s Day Massacre. The company, to this day, winks at the incident with its Undercover Shut-Down Ale. And marijuana appreciation remains a key part of the company’s culture today.

Oskar Blues, meanwhile, named its Session IPA “Pinner” – slang for a tightly rolled joint with small amounts of pot. To further drive home the message, the can is decorated with sayings that include “Can I Be Blunt” and “Sip Sip Give.” And Sweetwater’s flagship beer is named 420.

It’s a game of cat and mouse with regulators, though, who say “drugs, drug terms or slang associated with drugs” are forbidden in beer labeling. Michigan’s Dark Horse Brewing Co. found out the hard way when it was forced to change the name of its “Smells Like Weed IPA” to “Smells Like A Safety Meeting.” (Though, as with Pinner, the FDA apparently wasn’t up to speed on lingo, failing to realize a “safety meeting” is code for “we’ll be smoking marijuana at work.”)

On the GABF floor, Dad & Dude’s Breweria is offering tastings of a cannabis-infused beers to show goers. It’s a beer that has many of the characteristics of a typical IPA, but it carries a much sweeter finish. The THC is stripped from the hemp used in production, so imbibers won’t get high, but Indica Double IPA is made with cannabidoil, which is extracted from legal hemp. (Co-founder Mason Hembree says the cannabidoil actually doesn’t impact the flavor of the beer at all.)

“Finding a legal hemp oil was difficult,” says Hembree. “Locally cultivated cannabis is not legal for brewers, yet.”

Home brewers in Colorado, of course, have already made THC-infused beers. And in March, a Craft Beer and Cannabis/Hash Pairing seminar was scheduled at Green Labs, an workspace for marijuana-related startups, that offered three different beer and hash courses. (Ed Haas, who was scheduled to lead that seminar, has said one of his favorite pairings was Mikkeller Spontan Cherry – a cherry-infused sour ale – and pairing Cherry Afghan CBD dabs.)

Anticipating that some of the people attending GABF will attempt a few of their own pairings, dispensaries are offering some guidance of their own to help people control the reactions.

“The most common advice we give is alcohol makes people more willing to take risks,” says Hageseth. “You’ll often get people who say they haven’t tried marijuana in four or five years, then they go to GABF and they think they’re impenetrable. … It’s particularly bad to have alcohol first, then marijuana. It can create some very uncomfortable experiences for some people. … If you’re high on marijuana first, than drink, it’s not nearly as bad. You’ll know when you’ve had enough and you’ll stop after one or two beers.”