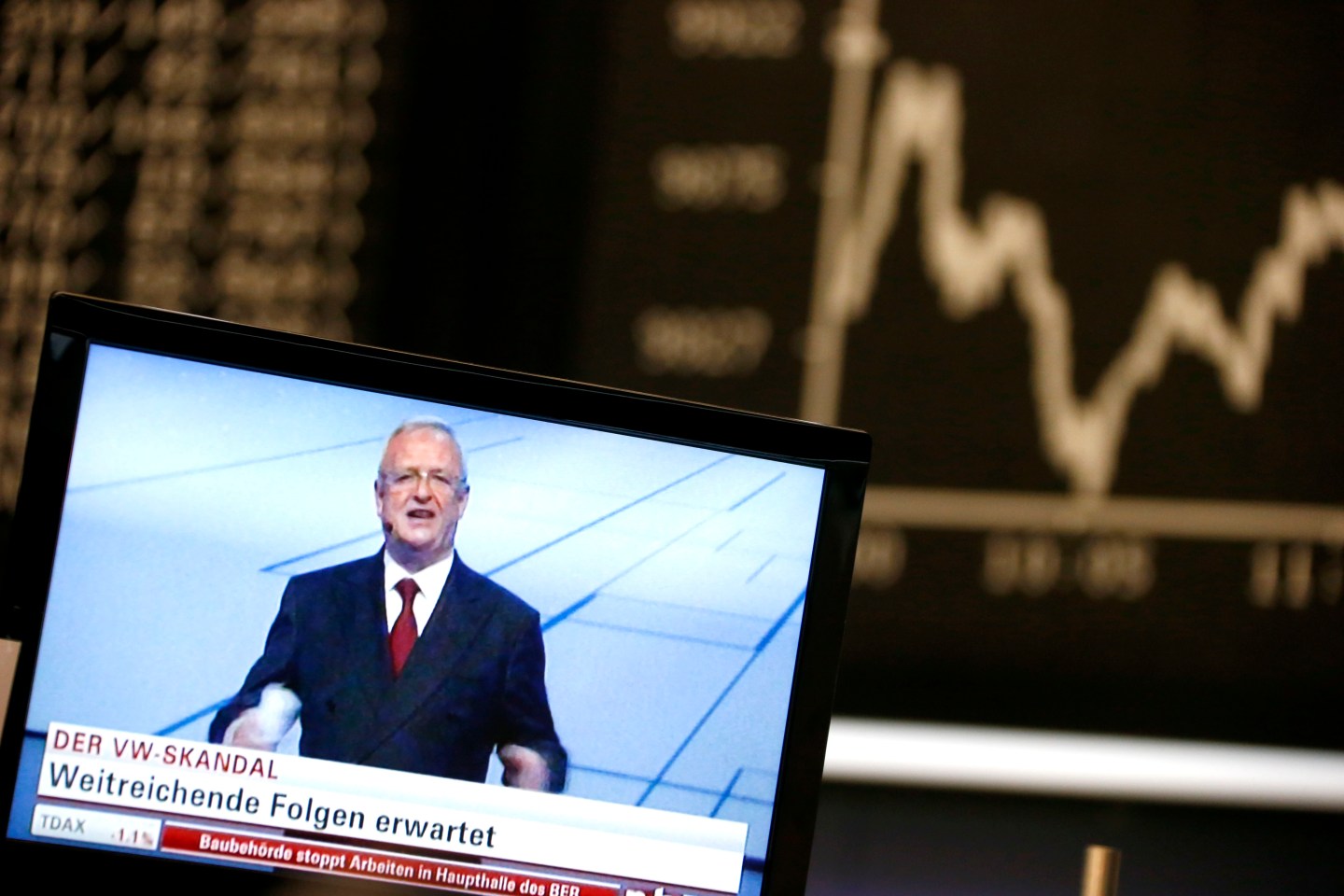 Martin Winterkon, CEO of Volkswagen, appears in a news broadcast on a TV in front of the German share price index DAX board, at the stock exchange in Frankfurt, Germany September 21, 2015.Volkswagen shares plunged more than 20 percent on Monday, their biggest ever one-day fall, after news that the German carmaker had rigged U.S. emissions tests, and Germany said it would investigate whether data had been falsified in Europe too. REUTERS/Ralph Orlowski TPX IMAGES OF THE DAY - RTS25PN
Photograph by Ralph Orlowski — Reuters

On Tuesday, VW announced that 11 million vehicles worldwide that it built are equipped with the four cylinder diesel engines that U.S. Environmental Protection agency says contains software that defeats emissions tests. The automaker also said it will set aside 6.5 billion euros — roughly $7.3 billion — to cover costs associated with recalls, liabilities, fines and to address disgruntled customers

VW, which has lost about a fifth of its market capitalization, denied reports from the German newspaper Tagesspiegel that Martin Winterkorn, 68, chief executive officer, will be replaced by Matthias Mueller, 59, head of the automaker’s Porsche business. A committee of the automaker’s supervisory board – equivalent to a U.S. board of directors – is scheduled to discuss the crisis on Wednesday. A previously scheduled meeting of the entire board is to take place on Friday.

Herbert Diess, a recent hire from the top executive ranks of BMW, on Monday abruptly cancelled a scheduled appearance at the launch of a new Passat in the U.S.

Concern over VW, its vulnerability to legal claims and charges, as well as repercussions for the rest of the German industry, arguably the nation’s most important, has been triggered at the highest level of government. Angela Merkel, chancellor, has called for “full transparency” and expressed her hope that “the facts will be put on the table as quickly as possible.”

The ground under Winterkorn’s feet grew shakier on Tuesday as a labor representative on VW’s board said that his faction, which comprises half the supervisory board, will push for management changes. In a letter obtained by the German newspaper Bild and reported by Reuters, Bernd Osterloh said: “I can assure you that we will do everything possible in the supervisory board meetings this week to ensure the matter is cleared up quickly and that personnel consequences are drawn. And that will not just affect the rank and file, I can assure you.”

The stance of labor representatives and the Merkel government could foreshadow a clash with the renowned Porsche automaking family, which controls 51% of VW through a family trust. About a fifth of the trust is controlled by Ferdinand Piech, until a few months ago VW’s chairman, who remains an influential figure. VW’s culture under Piech has been rigidly authoritarian, hierarchical and dominated by engineers. The company hasn’t been shy about flouting convention and beating its chest, announcing several years ago that it intended to become No.1 in sales – a bald assertion that shocked public relations strategists.

Though VW has led Europe in sales and shared dominance in China with General Motors Co., it has floundered in the U.S., misreading consumer preferences by failing to develop enough crossover utility vehicles and sports utility vehicles. New problems for VW are surfacing almost by the hour, as the Los Angeles Times tallied $51 million of federal subsidies paid in the U.S. to buyers of VW diesels, who emissions tests were false.