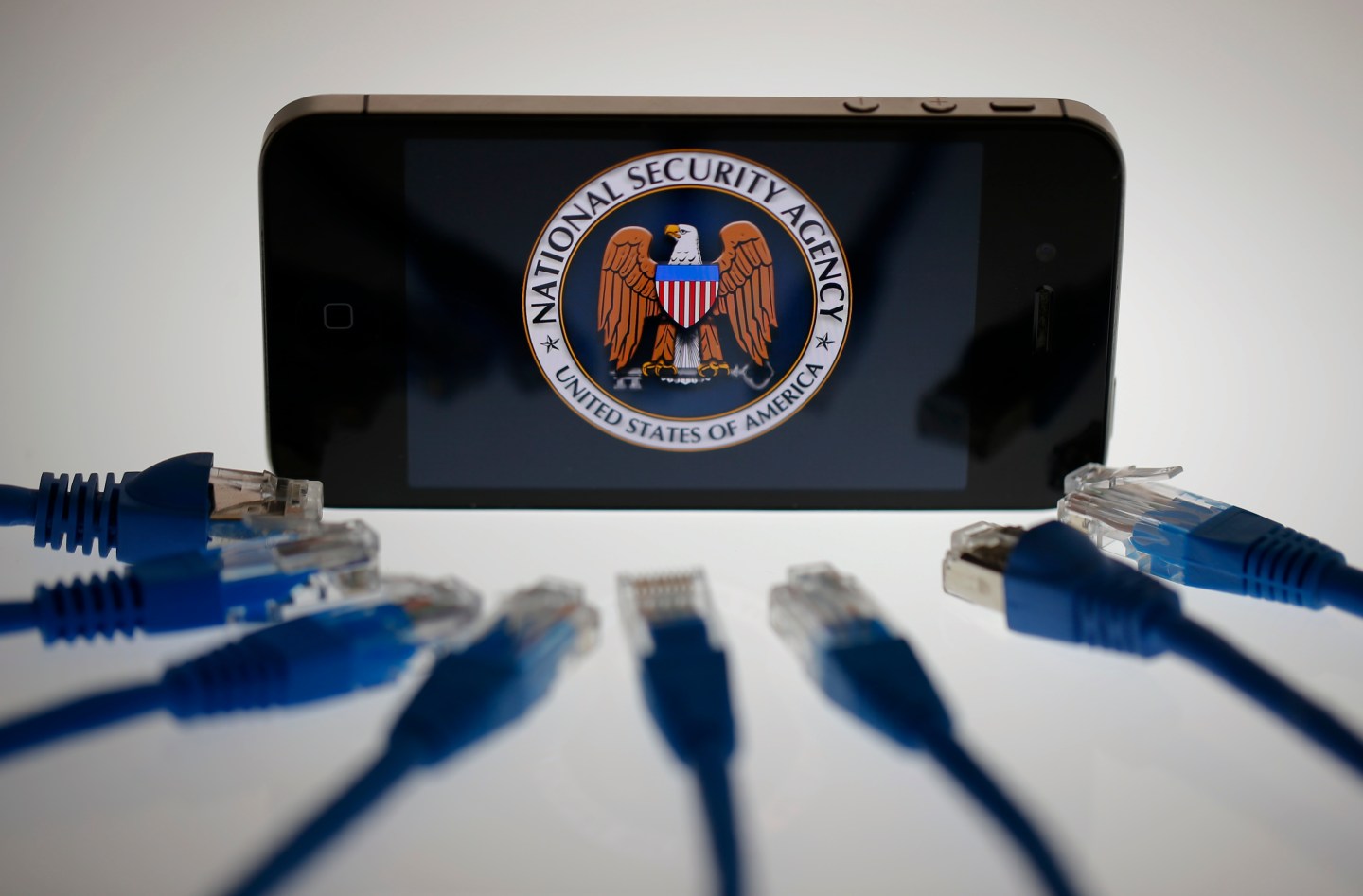 An illustration picture shows the logo of the U.S. National Security Agency on the display of an iPhone in Berlin, June 7, 2013. The debate over whether the U.S. government is violating citizens' privacy rights while trying to protect them from terrorism escalated dramatically on Thursday amid reports that authorities have collected data on millions of phone users and tapped into servers at nine internet companies. REUTERS/Pawel Kopczynski (GERMANY - Tags: POLITICS SOCIETY BUSINESS) - RTX10EZ0
Photograph by Pawel Kopczynski — Reuters

The U.S. Senate has scrapped a controversial proposal to force social media firms like Facebook (FB) and Twitter (TWTR) to notify the government about users who discuss terrorism. The plan, which was intended as a national security measure, had been attacked as both vague and an attack on free speech.

“Social media companies aren’t qualified to judge which posts amount to ‘terrorist activity,’ and they shouldn’t be forced against their will to create a Facebook Bureau of Investigations to police their users’ speech,” said Sen. Ron Wyden (D-Or) in a statement on Monday that applauded the Senate’s decision to kill the plan.

The measure had initially been included in the 2016 Intelligence Authorization Act, a funding bill for U.S. intelligence agencies, but Wyden put a hold on the bill this summer in protest.

A tech industry trade group, the Internet Association, had also pushed back against the measure, arguing it undermined free speech and would place companies like Facebook and Twitter in the untenable position of deciding what counted as “terrorist” and what did not.

The plan to deputize the social media companies in the fight against terrorism has received support from other politicians, however. These include Sen. Dianne Feinstein (D-Ca), who in July reportedly described the notification requirement as a way to say, “Hey Mr. and Mrs. American technology, you have a responsibility too.”

The debate comes as policy makers wrestle with how to respond to the use of social media platforms by terrorist groups like ISIS, which broadcast their gruesome activities as a recruitment tool.

Tech companies themselves have acknowledged an uptick in terrorist propaganda on social media. In July, senior Google (GOOG) executives warned ISIS was “taking it to another level” on YouTube, and proposed increasing counter-messages (perhaps like those of melon-loving ISIS-chan) as one way to stop them.

Meanwhile, in a sign of how seriously the military community regards the ISIS propagandists, the U.S. and UK have begun targeting them in airstrikes. In August, for instance, The New York Times reported on the death of an ISIS hacker who frequently used Twitter to celebrate atrocities and spur recruitment.