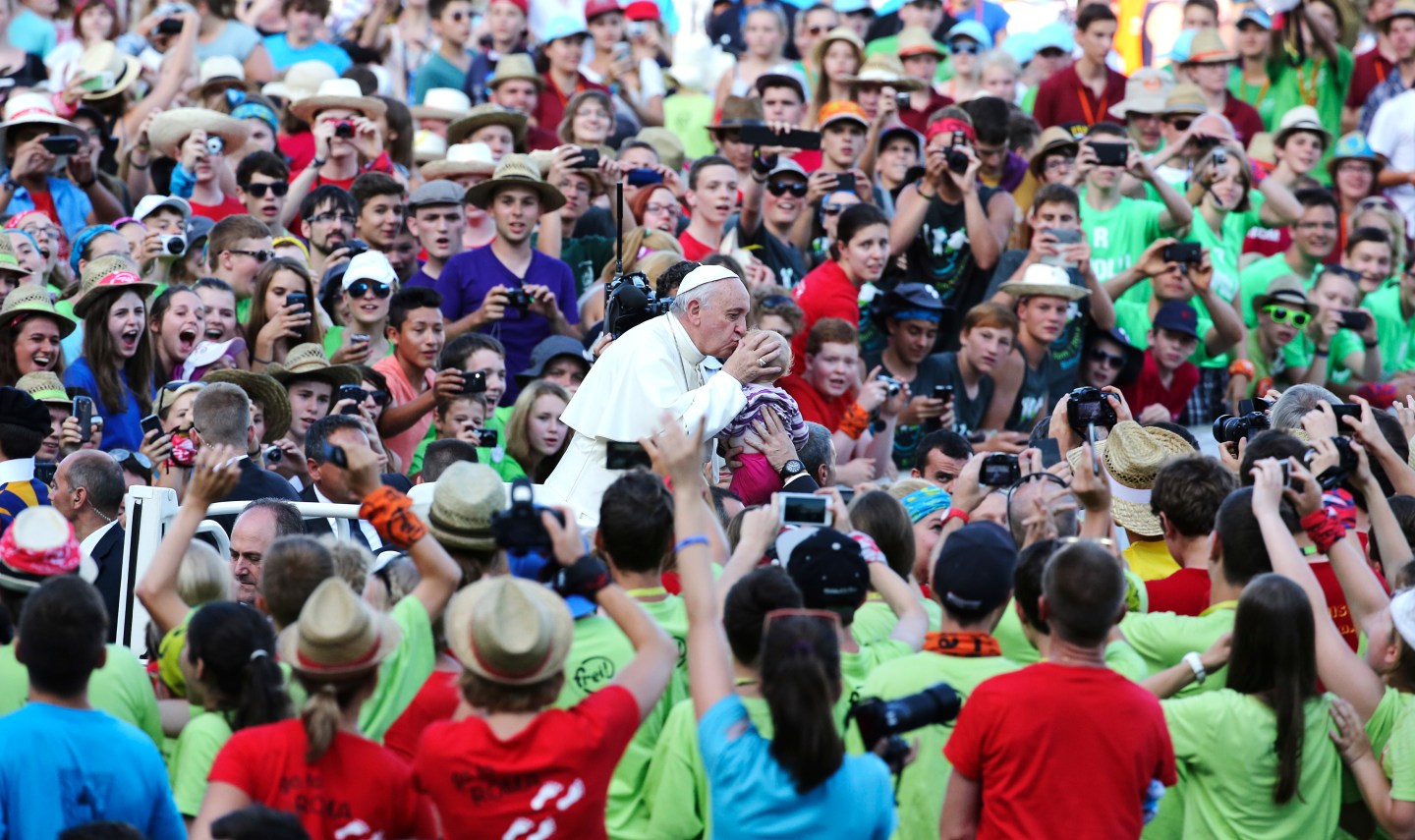 Pope Francis kisses a child as he arrives to leads a meeting with altar workers in St Peter's square at the Vatican August 5, 2014. Tens of thousands of altar servers from Germany, Austria gather at the Vatican to meet with Pope Francis. REUTERS/ Stefano Rellandini ( VATICAN - Tags: RELIGION TPX IMAGES OF THE DAY) - RTR41C7P
Photograph by Stefano Rellandini — Reuters

As Washington D.C., New York and Philadelphia prepare for the visit of Pope Francis later this week, bridges, roads, schools and offices are closing while municipal officials are setting up elaborate dashboards to monitors their infrastructure. The cell phone companies are doing the same thing to ensure that those visiting can text, tweet or stream their audience with the pope. For example, Verizon (VZ) has spent $24 million to quadruple network coverage for Philadelphia’s Papal Mass. AT&T (T) spent $23 million and will also quadruple its network capacity.

In additional to established cellular infrastructure, the big carriers also bring in temporary gear that sounds more like farm animals to help beef up their coverage. For example, carriers will use Cell on Light Trucks (COLTs) and Cell on Wheels (COWs) in Philadelphia, New York and Washington D.C. This equipment is basically a temporary base station that network operators roll into town for sporting events, music festivals and papal visits.

Usually these base stations are combined with extra Wi-Fi hotspots and small cells located around the buildings as well if the carrier can manage. The Wi-Fi helps offload some of the intense video streaming from the cellular network. Not to be outdone by the wireless companies, Comcast,(CMCSA) the nation’s largest broadband company with corporate headquarters in Philadelphia, is also boosting the network for the pope’s service.

The World Meeting of Families, the event itself, is putting up 31 Jumbotron’s around town, and Comcast is adding Wi-Fi hot spots to them that anyone can access for free. So if your cellular network is lacking, you can switch to Wi-Fi if you are near one of those Jumbotrons.

Current estimates have the Papal Mass attracting between 1.5 million and 2 million people, yet with the exception of the COLTs and COWs, the infrastructure that AT&T and Verizon have invested in will be permanent. Both have leased capacity on a new distributed antenna system that was installed along the Benjamin Franklin Parkway.

Sprint (S) has also added new cell sites. T-Mobile says that it has added capacity at its regular sites, is using COLTs and COWs, and also is leasing space in the distributed antenna system along the Ben Franklin highway but also in one in Madison Square Garden for the Papal trip to New York.

Updated: This story was corrected to reflect that the World Meeting of Families has worked with Comcast to provide free Wi-Fi to everyone to near the Jumbotrons.