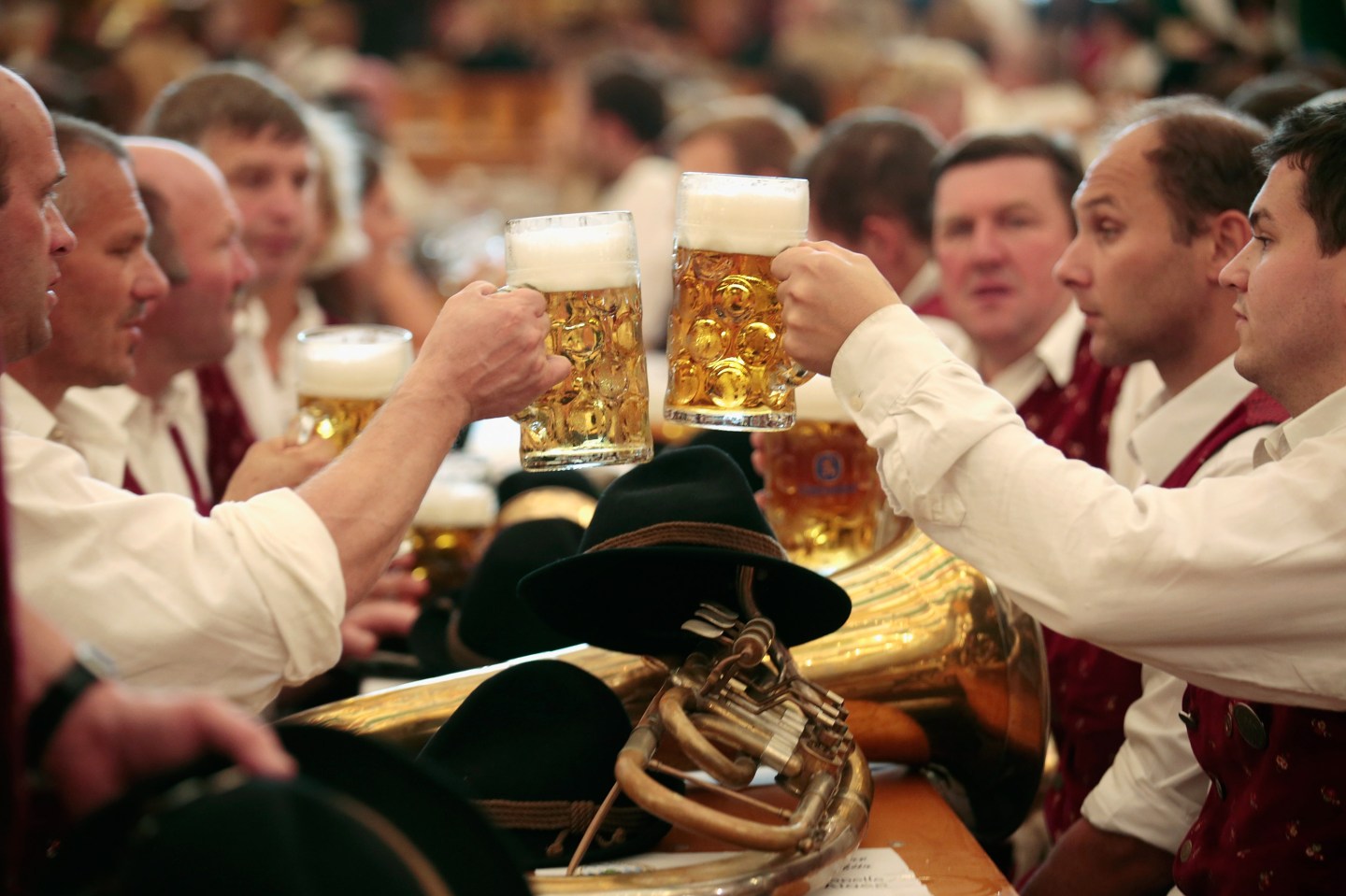 MUNICH, GERMANY - SEPTEMBER 21: Participants of the Parade of Costumes and Riflemen (Trachten- und Schuetzenzug) enjoy drinking beer at Schuetzen beer tent on the second day of the 2014 Oktoberfest on September 21, 2014 in Munich, Germany. The 181st Oktoberfest will be open to the public from September 20 through October 5 and traditionally draws millions of visitors from across the globe in the world's largest beer fest. (Photo by Johannes Simon/Getty Images)
Photograph by Johannes Simon — Getty Images

At high noon on Sept. 19 in Munich, Germany (6am ET), Dieter Reiter, the city’s mayor, will tap the first barrel of the beer festival that’s known the world over. Started in 1810 as a celebration to honor the wedding of Bavarian Crown Prince Ludwig’s to Princess Therese von Sachsen-Hildburghausen, it quickly became an annual tradition.

As for the apparent conflict between the name Oktoberfest and when the festival is actually held, blame the finicky German weather for that. Because October nights can get quite chilly, the country moved the dates forward on the calendar, allowing celebrants to enjoy the gardens outside of the tents.

It’s an unparalleled event. German officials estimate more than 6 million people will pass through the tents before all is said and done. They aren’t likely to leave with much pocket change, either. All 32 tents this year are charging €10 or more per beer.

Don’t have the budget to travel to Germany – or the patience to deal with those sorts of crowds? Odds are there’s a local version of Oktoberfest near you – with fewer people and copious beer selections (though the wursts may not be as good). And if that sounds like too much, it’s easy to arrange and throw your own celebration at home.

Many craft brewers embrace the Oktoberfest spirit and offer their own takes on the beers you’ll find in Munich. And like pumpkin beers, they begin their distribution earlier each year, so there’s no shortage of them on store shelves.

What’s noteworthy about them is brewers approach these beers differently than they do other styles. While there are a seemingly infinite number of interpretations of an IPA, Oktoberfest-style beers tend to be Märzens – and there’s not a lot of room for putting a personalized stamp on the style. And while the alcohol content in them can vary, they tend to stick to the same basic formula: Malt-heavy lagers that are amber or copper in color.

That’s not to say there’s a strict uniformity in the styles, of course. Some lean to the sweet side, while others are crisp. Some tend to depend more on the spices and hops. And some brewers are simply better than others, which can greatly affect quality. But ultimately, you’re likely to end up with a very malty beer – that’s a lot different than the usual malt-forward year-round offerings.

There are dozens of national offerings when it comes to Oktoberfest beers – and that number escalates with regional brewers. So picking the right one for you can be challenging. Half the fun, frankly, is experimenting with them and divining the variations in style, but here are a handful to get you started.

Highland Brewing’s Clawhammer Oktoberfest – The name might imply that this carries a punch. It doesn’t. In fact, this is a remarkably smooth lager that’s malty and mild, though the spices and hops make their presence known at the finish. It’s a crisp beer that goes down very, very easily – and a personal favorite of mine in the Oktoberfest category. (ABV: 5%)

Samuel Adams Octoberfest – One of, if not the best selling Oktoberfest beers in the U.S., this take from the Boston Beer Co. is light and tastes of sweet biscuits with just a hint of hops. The spices aren’t overpowering, there’s a moderate amount of caramel and the beer has a nice, dry finish. (ABV: 5.3%)

Fort Collins Oktoberfest – This is a Märzen that falls on the sweeter side of the scale, with a dominant caramel taste. The malt is the backbone, but spices are muted and you won’t pick up much from the hops either. (ABV: 5.4%)

Shiner Oktoberfest – The Texas take on the German standard is as smooth as its other offerings and full of malt. The caramel taste is more forward here, making it a bit less crisp than some of its competitors, but it has a creaminess that lets it stand out a bit from the pack. (ABV: 5.8%)

Sierra Nevada-Brauhaus Riegele Oktoberfest – If nothing else, you have to give Sierra Nevada points for authenticity with this one. The California brewer teamed with Augsberg, Germany’s Brauhaus Riegele to create this authentic take on a Märzen. It’s a very well-balanced beer that’s moderately sweet with caramel and floral notes. But the hops prevent those from overpowering the beer. (ABV: 6%)

Paulaner Oktoberfest/ Märzen – Of course, if you want to get authentic with your Oktoberfest celebration, you can always pick up a beer made in Germany for the festival. Munich-based Paulaner developed this beer over 200 years ago and it has basically perfected the recipe. The balance between the barley and hops is spot on. There’s a slight hint of sweetness, but this is a light, bread-like beer that is easy to enjoy. This isn’t an Oktoberfest that’s looking to stand out from the pack. This is the one that the pack formed around. And it’s a must-have at this time of year. (ABV: 5.8%)