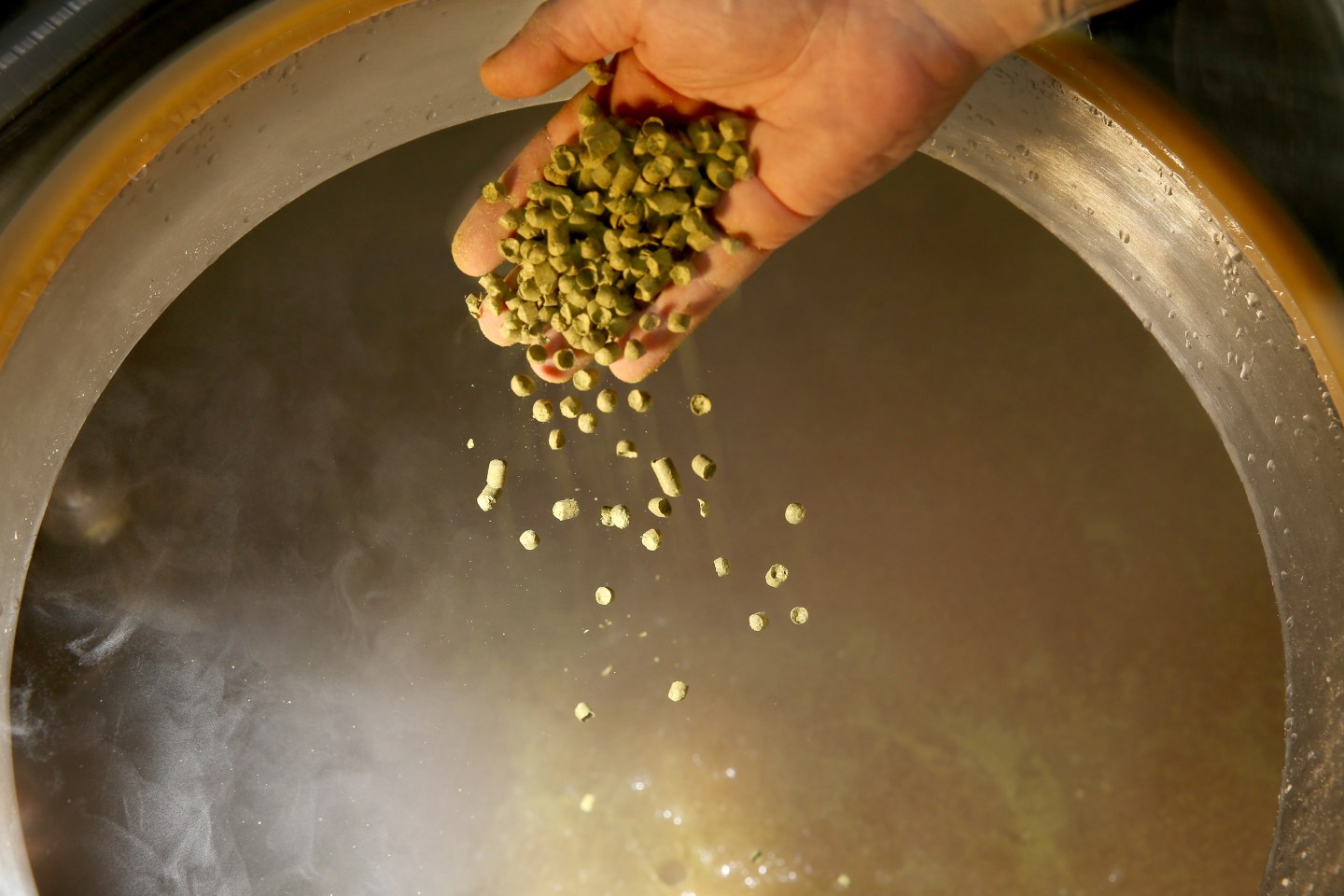 MIAMI, FL - APRIL 25: Brewmaster Nik Mebane adds hops to the boiling liquid as he produces beer at Wynwood Brewing Company on April 25, 2014 in Miami, Florida. Earlier this week Floridas Senate Rules Committee voted 9-4 for a bill that would heavily restrict the states craft breweries such as the Wynwood Brewing Company and is supported by the Florida Beer Wholesalers Association, which has controlled beer distribution in the state for decades. (Photo by Joe Raedle/Getty Images)
Photograph by Joe Raedle — Getty Images

Craft brewers aren’t just changing the beer industry, they’re having a noticeable impact on the nation’s farmers as well.

Craft breweries tend to use a lot more of the key brewing components per batch than large competitors like Budweiser and Coors. How much? A recent research report from the U.S. Department of Agriculture notes that the average craft style beer uses between three and seven times as much malt per barrel as a mass market lager.

Malt comes from barley (grains are germinated, which frees up their sugars for fermentation). And that’s good news for farmers, who have seen barley prices fall by 50% since 2012. The problem is: U.S. farmers aren’t yet positioned to take advantage of the surge in demand.

Most craft brewers aren’t fiscally able to buy an entire field’s worth of barley, so rather than dealing directly with farmers, they go through merchants, who typically import European or Canadian malt, says Doyle Lentz, president of the National Barley Growers Association. That could be changing soon, though.

Farmers are already in the process of installing equipment to malt smaller batches to be able to cater to the craft world. The downside? It could be up to five years before they’re able to effectively compete.

“I think they’d like to work with us, but they don’t have the infrastructure to do that – neither of us do,” he says. “As we can start malting smaller batches for them, the [lower domestic] price will be something that interests them. Our hope is they’ll warm to a more local growing option as well.”

That led farmers in 14 states (including Colorado, Michigan and New York) to begin planting hop plants for the first time in 2014 – which could lead to some interesting new flavors in beer.

“Hops are a lot like wine grapes,” says Ann E. George, administrator for Hop Growers of America. “You’ll have specific varieties grown in different regions that each have a different character.”

Curiously, the type of hops grown in America have changed in recent years, too. Not long ago, domestic farmers specialized in alpha hops, which give a beer its bitterness. This year, George says 70% of the crops will be aroma hops, which contribute more to the taste and nose of the beer.

Whether you like hops or barley, there are, of course, a plethora of choices when you reach for a craft beer. Here are some of our favorites.

This isn't the bitter explosion you might expect, given the name. Instead, it's an extraordinarily well-balanced IPA that is refreshing and crisp. It has an initial hoppy kick, but that's tempered by hints of caramel, spices and malt that are almost reminiscent of a graham cracker. The poppy seeds that make up the second half of the name are hard to pick out, but they do add an earthiness. (ABV: 6.5%)

The hops in this palate-buster punch you in the mouth with your first sip of this over-the-top IPA. Stone gleefully crows about the bitterness and the overwhelming hoppiness on the bottle and they're not exaggerating. If you adore hops, this is your nirvana. If you're a fan of IPAs looking for something stronger, you might want to work up to this, as the bitterness lingers long after you've put down the glass. (ABV: 8.2%)

You might have seen this one coming. Dogfish's 90 Minute is widely touted as one of the best IPAs on the market. That's because it blends the hops and malt so wonderfully that neither proves overpowering. Yes, the hops might be a bit much for some, but IPA veterans will appreciate the hints of fruit and caramel and the creamy mouth feel. It's one of those beers that should be on everyone's craft bucket list. (ABV: 9%)

There's a reason this is one of the most universally loved beers around. It's enormously complex - with a completely different flavor as the temperature of the beer changes. The constant theme is a full-bodied maltiness that blends with a variety of fruit flavors, including prunes and cherries. It's one of the better American examples of a Belgium ale, though it's definitely best served as an after-dinner drink. This is the very definition of a sipping beer - and not just because of its high alcohol content. (ABV: 9.7%)

The malt infuses this beer with a chocolate taste that dances on the tongue, but doesn't overwhelm the palate. There are hints of roasted coffee as well and the slightest bitterness from hops. The balance of sweetness and the burnt flavors that come with a stout results in a really delicious beer - even for those who may not normally prefer stouts and porters. (ABV: 6.6%)

The overall consensus among our tasting group when they got their first whiff of this limited release from the Fort Collins Brewery was that it smelled like "dank weed". That's a temporary impression, though, as the beer itself is a malty concoction that is well-balanced with a hint of sweetness. You'll taste raisins at the finish, which complement the yeasty, slightly chocolate initial impression. (ABV: 8.2%)