Where in the world have the 2016 Republicans been? The answer, in 11 maps 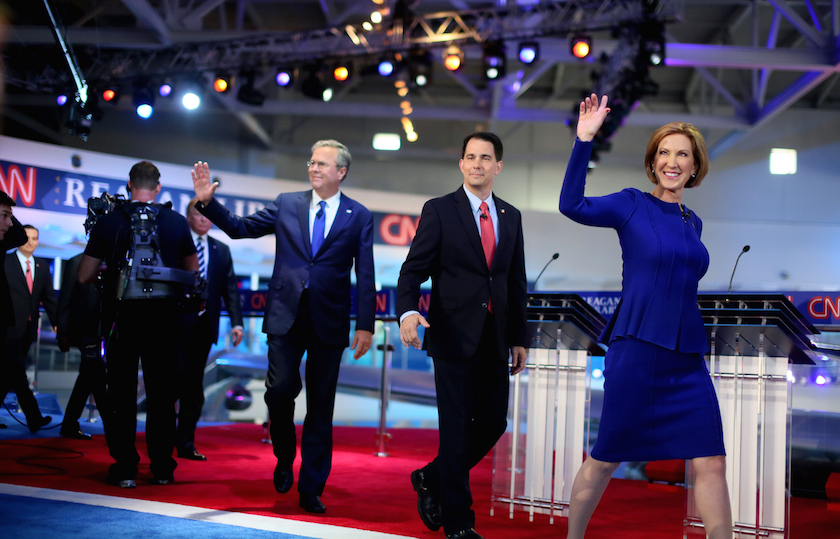 During her breakout performance in the Republican debate on Wednesday night, former Hewlett-Packard CEO Carly Fiorina dropped a classic humblebrag about her frequent-flier status.

Fiorina, attacking Hillary Clinton’s record as Secretary of State, suggested the Democratic frontrunner’s globetrotting in that role was nothing to crow about. “Like Mrs. Clinton, I, too, have traveled hundreds of thousands of miles around the globe,” she said. “But unlike Mrs. Clinton, I know flying is an activity, not an accomplishment.”

True to the form, Fiorina implied her boast was no such thing by quickly diminishing it. But if the candidate didn’t want voters to know how well-traveled she is — and associate all that mileage with the worldliness befitting a president — she wouldn’t have wasted valuable airtime by constructing her criticism around it. South Carolina Sen. Lindsey Graham made the link between travel and experience more directly in the “undercard” debate that preceded the main event on Wednesday night. Talking up his grasp of the Middle Eastern conflicts he wants front and center in the primary, he said, “I’ve been there 35 times to Iraq and Afghanistan. I am ready to be commander-in-chief on Day One.”

So, just how many times have the leading contenders for the GOP presidential nod had their respective passports stamped? A new survey by Hitlist, a travel app, crowd-sourced the answer on Reddit then followed up with the campaigns. Fortune got an exclusive first look at what they found — and we also reached out to the campaigns to confirm the results. Only representatives for frontrunner Donald Trump and Kentucky Sen. Rand Paul replied (go figure), so keep in mind this list may not be completely complete. But it nevertheless offers a potentially revealing snapshot of the international travel habits of those who aspire to become the preeminent world leader.

Fiorina does indeed appear to have seen a lot of the world, though she only ranks fourth in the field for countries visited in her lifetime — behind Bush, Trump, and former Arkansas Gov. Mike Huckabee. She logged much of her travel during her tenure at HP but got an early start by studying abroad in England and Ghana and teaching English in Italy.

The former Florida governor laps the field when it comes to seeing the world, having touched down in nearly twice as many countries as his nearest rival — and nearly a quarter of all nations on Earth. Like Fiorina, travel abroad made a major impact on Bush at an early age: He met his wife, Columba, at the age of 17 when he was studying in the village outside of León, Mexico.

No surprise for a guy who owns his own Boeing 757, the Republican frontrunner gets around. And he’s always got a business excuse to wing out of the country — a new golf course in Ireland, a Miss Universe pageant in Panama, casinos and resorts all over the world, yuge, very successful — by now, you surely know the routine.

You wouldn’t peg the former Arkansas governor for a globetrotter, considering his carefully cultivated downhome image. But the onetime Fox News host has collected proverbial stickers on his suitcase from visits to warzones in the Middle East, trade missions to East Asia, and a weeklong antipoverty mission to Rwanda.

The New Jersey governor has earned some unwelcome attention for his international travel. A New York Times report earlier this year detailed the lux accommodations he and his family enjoyed on a 2012 trip to Israel and Jordan, including traveling on a private plane loaned by casino billionaire Sheldon Adelson.

The Texan firebrand has made a get-tough approach to immigration a centerpiece of his bid, belying his international origins: His father was a Cuban refugee, and the Senator himself was born in Canada. He appears to have logged much of his travel abroad in recent years on Congressional delegations.

Over three decades in and out of public office, Kasich has had plenty of opportunities to see the world on the taxpayer dime. And he’s seen everything from the bombed-out war zone of post-civil war Bosnia to the rarified air of the World Economic Forum in Davos, Switzerland.

Like Cruz, the junior Florida senator traces his origins to Cuba. And he’s worked to distinguish himself in the 2016 field as a leader ready for the world stage, drawing on his experience serving on the Foreign Relations and Intelligence committees in the Senate. And in a relatively short career on the Hill, he’s touched down on four continents on official trips.

The Wisconsin governor earned some ribbing from President Obama earlier this year after he suggested he’s equipped to confront ISIS based on his experience battling labor unions at home. And his first-hand experience of the world beyond our borders appears relatively limited, though he’s stepped up his international travel this year as his presidential bid ground into gear.

The Kentucky senator has bristled at being characterized as an isolationist, and he worked during the Wednesday debate to emphasize he favors robust engagement abroad as an alternative to armed conflict. When it comes to seeing the world for himself, however, the libertarian-minded candidate has mostly abstained, visiting only four other countries — Israel, Jordan, Guatemala, and Haiti.

Among the top tier of Republican candidates, the retired neurosurgeon appears to have a singularly limited history of travel abroad. The Hitlist survey shows he’s only been to Israel. But this may be a place where the report misses some of Carson’s experience.