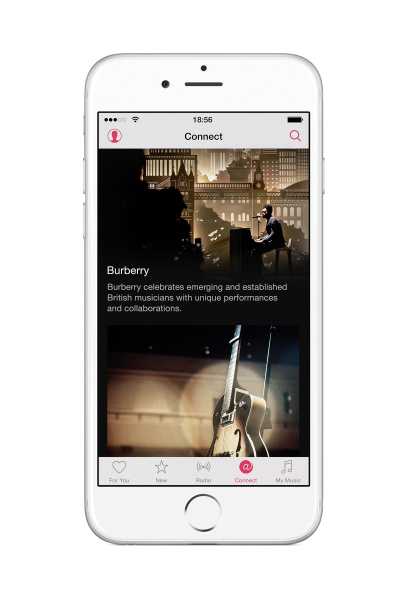 Apple (AAPL) has recruited a familiar partner to beef up its music streaming service: Burberry.

The English luxury house, best known for the tartan pattern that adorns its scarves, raincoats, and other high-end clothing, will on Tuesday become the first such brand to have a dedicated channel on Apple Music. Burberry has long been an advocate for British music with its Burberry Acoustic showcase, founded in 2010 and aimed at bolstering its status as a lifestyle brand.

The channel, which will live in Apple Music’s “Curators” section, will show off both emerging and established British artists, including performances, songs, videos and playlists of British legends past and present. Since its inception, Burberry Acoustic has filmed nearly 100 performances that have garnered some 19 million views on YouTube. The program’s artists have included Clare Maguire and Keane.

With the Apple tie-up, the company is betting on a lot more exposure.

“I am excited about our partnership with Apple on this amazing platform which will enable us to take what we do now with Burberry Acoustic and share it with an even bigger audience,” said Burberry CEO and chief creative officer Christopher Bailey in a statement.

Bailey succeeded Angela Ahrendts two years ago when she moved to Apple to head its retail business. It is not clear if Ahrendts played a direct role in this Burberry-Apple partnership. (For more on Ahrendts’ work at Apple, please read this feature story from the September 15, 2015 issue of Fortune magazine.)

For Apple, the collaboration with Burberry appears to be a way to enhance the appeal of its nascent streaming music service that hasn’t been an out-of-the-box smash since its June launch. (Apple last month said 11 million iPhone users had signed up, though the company was offering a free three-month trial so it is anyone’s guess whether those people will pay for the service after the free run is done. And that number represented only 2% of Apple’s installed base of 500 million iPhones and good enough to be the #6 streaming service.) With its Beats 1 radio station, Apple premiered curated programs from artists such as Q-Tip, St. Vincent, Dr. Dre, and Pharrell; perhaps Apple Music could benefit from the influence of an additional tastemaker.

This is also not the first time that Burberry and Apple have teamed up. Two years ago, Burberry used Apple iPhone 5s devices to capture and share all digital images, video, and live-streamed content before, during, and after a fashion show. Burberry has also collaborated with Apple’s digit music store, iTunes, to produce exclusive, unique recordings of the soundtracks that accompany runway shows.

Burberry plans to launch its Apple Music channel with a series of special videos as well as a concert by Alison Moyet, to be held at its womenswear show in London next week.