Is 11 million Apple Music subs anything to brag about? 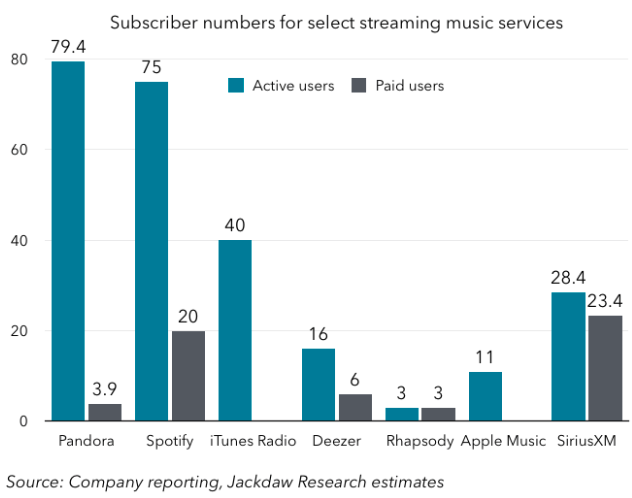 Apple PR last week used an exclusive with USA Today to announce that 11 million iPhone users signed up in the first four weeks for a free trial of Apple Music—a free trial that will, unless subscribers remember to opt out, convert by default to a $9.99 monthly service.

But is 11 million in four weeks anything to brag about? Jackdaw Research’s Jan Dawson is not so sure.

“In the context of other music services, Apple Music has made a great start,” he wrote in a Monday morning post to his Tech.pinions subscribers. “But in the context of Apple’s overall base, it’s made a pretty slow start.”

But Apple’s Jimmy Iovine has the inside line:

“For many people outside of the U.S., you still have to explain what it is and how it works,” he told USA Today’s Marco della Cava. “Beyond that, there’s still the issue of winning over Millennials, who never pay for music, by showing them you’re offering something that will improve their lives. And finally, there are people out there who I think understand its value, but we still have to go out and get them.”

Apple has still got plenty of time. Apple Music is only one month into its three-month free trial period, and because it’s opt-in, enough subscribers will probably stick around in October to put it ahead of all the rest of the paid services except Sirius and Spotify.

As Dawson has written, Apple is not in the music streaming business for the money—which may help explain why the service still has so many rough edges. (See Apple’s toxic hellstew.)

But Apple is ambitious, and as Tim Cook keeps reminding us, music is close to the company’s heart. Whatever the music platform of the future turns out to be, Apple wants to own it.

Whether that’s possible remains to be seen.

“The long-term question,” writes Andreessen Horowitz’ Benedict Evans, “is whether Apple’s vision of curation and its reach (and the power of the default) can expand the market for paid streaming from tens of millions to a hundred million or more. How many people actually care enough about music to want more than the Youtube top 10 and are willing to pay?”