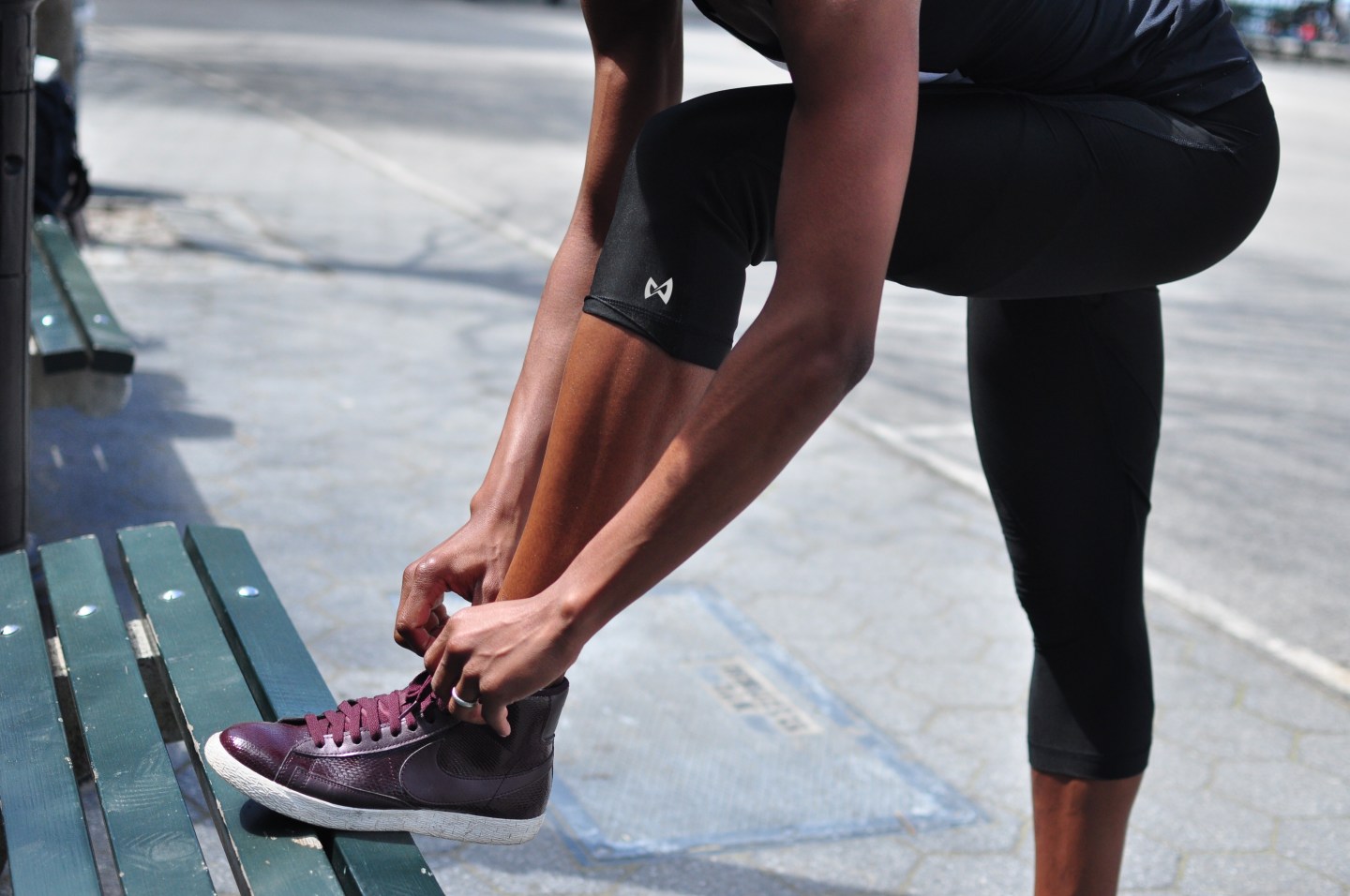 There’s a bridge between the runways of New York Fashion Week in Manhattan and the U.S. Open in Queens, and it’s not the one spanning the East River. Wearable tech embedded in an emerging breed of clothing designed for functionality and fitness is also poised to make a fashion statement.

Ralph Lauren’s $295 PoloTech shirt (RL), for example, is outfitted with sensors that transmit data to an app on the wearer’s heart rate, stress levels and energy output. So are Hexoskin’s $169 tank tops (used by Olympians and professional sports teams) and Athos’ long-sleeved $298 shirts that fit snugly, wick sweat, and stream physical data to sensors that connect to a Bluetooth. Then there are Physiclo’s shorts and leggings designed with resistance panels of smart fabric that tone and boost the calorie burn during a workout.

Other brands are stepping into the space, too, says Stéphane Marceau, CEO of OMsignal. Co-founder of the Montreal-based maker of smart garments that partnered with Ralph Lauren on the PoloTech shirt, Marceau believes that smart athletic apparel is poised to break out, given the interest he’s seen from big brands. Physiclo’s debut campaign on a crowdfunding site exceeded its original goal and has over 800 people signed up to receive the garments as soon as they are shipped in November.

Smart athletic apparel is lapping at the edge of a growing trend in athleisure where yoga pants and hoodies are elevated by luxury brands and fabrics. According to the NPD Group, a market research firm, sales in the sector reached $35 billion last year, representing about 17% of the entire U.S. clothing market.

Whether these wearables will catch on — including with women who have generally not warmed to the Apple watch — depends on their utility, rather than fashion, many say. “If a brand is able to produce an item that creates everyday efficiencies or solves a problem in a way that no other device can, we will get on board in droves,” says Katherine Power, cofounder and CEO of Clique, content and commerce company. Rather than think about the capabilities of a dress, she posits, smart apparel makers need to start with improving a daily function through technology and then figure out how that technology can be worn in a unique and safe way.

That’s the goal at Physiclo, co-founder Frank Yao tells Fortune. Developing the sleek, black shorts and leggings took two years of trial and error, he says, even though weighted resistance workout wear has been on the market for a while. The challenge was to create a fabric with better anatomic fixation points. In other words, bands that didn’t stretch and fall down while you exercised. And ones that were capable of compressing the time spent exercising from 30 down to 20 minutes.

Eventually, says Yao, the company plans to incorporate technology that will stimulate muscles and increase the efficiency of a workout. “We definitely don’t want to be seen as a late night infomercial [product],” Yao maintains, while pointing out that he and cofounder Keeth Smart, a former Olympic athlete, understand the value of collecting workout data while enhancing exercise.

Ben Arnold, a technology analyst at the NPD Group, contends that smart fitness wear has lots of potential. While an ab crunching device or exercise ball are often shoved aside, Arnold observes you still have to wear something when you work out, so why not a smart garment? Shirts, shorts, and leggings that are an actual piece of athletic equipment would also be more likely to be used in the long term, too, Arnold says.

He notes that fitness trackers tend to be embraced, then abandoned. NPD research projects that activity trackers will peak around 32 million in 2016 after logging steady growth for the past four years. Smart wear, he believes, will be “immune to fickle consumers. I always maintained that there are better places on the body like legs,” to track fitness data, he says.

For Marceau at OMsignal, that evolution is inevitable. Currently, OMsignal is working on developing a bra since it’s an item of clothing fitting closely to a part of the body that could collect core vital signs. “Women are interested in data,” he say, adding OMsignal also plans to collaborate with brands on smart wear for sports such as skiing and running.

Lydia Dishman is a business journalist covering innovation, entrepreneurship and style. She is a regular contributor to Fast Company and has written for CBS Moneywatch, Entrepreneur, Forbes, Popular Science, and the New York Times, among others.

Update: An earlier version of this story described Clique as a marketing company. A spokesperson says it is a “content and commerce” company.