Like it or not, designer yoga pants have become legitimate office wear 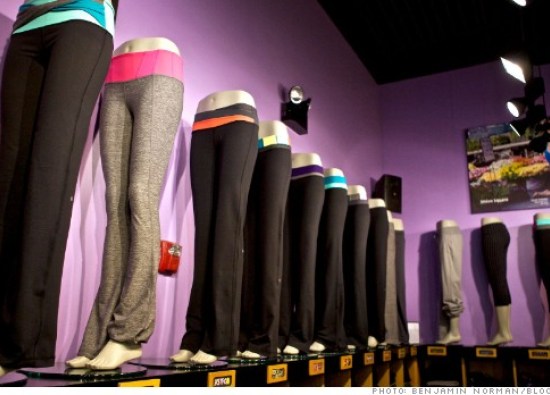 When Julian Thomas, who works at the creative agency Guild in New York, wore Alternative Apparel sweats to his first Casual Friday on the job, he thought he noticed a few looks from coworkers that day. “My suspicions were proven to be true, as during our Friday happy hour, one of my supervisors mentioned that he personally couldn’t have been as brave as I was to have worn sweatpants on his fourth day at a new job, and then slyly took a sip of his old-fashioned.” When Tomas defended his somewhat pricey joggers, “[the supervisor] went on by saying ‘no no, they look great! I’m just saying that I personally wouldn’t been able to pull that off.’ Ummm….awkward”.

By their nature, some clothing items are never appropriate for wear in the office, like bathing suits or pajamas. It used to be that workout wear or lounge wear like yoga pants or sweatpants would fall easily in that category as well, but that line is blurring with the introduction of high-end yoga pants and sweats — known as “athleisure.”

A recent Bloomberg Business article detailed yoga pants costing over $400, targeting women who choose couture in every other aspect of their fashion, and a Quartz article reported on premium sweatpants with price tags of $800 and even higher. These items are typically made with better quality fabrics, constructed with stronger seams and are sold in smaller runs, all factors which drive up cost. Of course, they’re also made by designer labels, which has more than a little something to do with the prices.

So if people are paying that much for items previously thought to be workout or leisurewear, is it ever OK to wear them to the office? Some professionals say yes–with limitations.

Thomas is still at his job, a few months after his first Casual Friday. “Maybe it’s the industry, or maybe us millennials have finally taken over,” he said. His team at Guild “favors the fashion forward, as long as it is appropriate and presents well. After all, athleisure is a trend now, and many of our clients offer those high-end sweatpants.”

It is the industry, at least according to Grant Harris, a menswear blogger, stylist, and consultant at Image Granted in Washington, D.C. He thinks high-end sweats can be worn in offices in the creative sector, like fashion or design. But although Harris personally owns a $180 pair of cashmere sweatpants, he said, “I would not wear sweats–no matter how tailored–to my studio.” His clients would not be pleased.

“I believe Lululemon was the gateway drug for women wearing yoga pants in public,” says Rebecca McKinney Blair, founder of Whistle Club boutique in Santa Barbara, which will carry a $400 luxury sweat pant this fall.

“Comfort is key today. And when we’re simultaneously celebrating comfort in fashion (like a time when Birkenstocks are in style and not relegated to hippies) it becomes more acceptable to invest in such pieces.”

There have been comparisons to jeans, the other dress-up/dress-down workhorses of the wardrobe that can command prices in the hundreds. Kara Martin Snyder, a health and lifestyle strategist at Vital Corps in Western Massachusetts, said she would pay around $250 for high-end yoga pants, “the same thing I’d spend on a premium pair of jeans that fit me just right.” Although she’s now the boss of her own business, she said she wore them to work as a CPA and controller for three New York tech startups. “Occasionally, people confused me for an intern–also due, in part, to my small stature and youthful appearance. However, my boss was more concerned with my work product than my workout wear.”

L.A. fashion publicist Samantha Slaven-Bick, said she’s paid up to $300 for athleisure pants and wears them to the office (she’s the boss) almost every day. ”But I’d want my employees to dress a little nicer,” she said, and admits “sometimes I feel a little self conscious when others around me are more dressed up, and I can feel more productive at work when I’m a bit more dressed up.” However, she’s seeing active-style clothing everywhere. “It’s what everyone wants to wear these days.”

Christy Monaco, a certified stylist/personal shopper from Alexandria, Virginia with The Stylist Online also works in a corporate office and is a Pilates enthusiast. She routinely spends $100 to $125 for workout pants, but she distinguishes them from athleisure, for which she would pay around $50 and advises the same to her clients. “It’s worth their money to pay more for classic silhouettes in classic fabrics, and I don’t at this point see the athleisure trend as having the potential for longevity.”

Mae Demdam, a digital analyst at seoWorks who lives in Sydney, said she would pay up to $250 for yoga pants of thick, durable fabric if they were guaranteed, but it’s not OK to wear them to the office. “The leggings are slim fit and they hug thighs which isn’t appropriate for the workplace. In fact there was a policy put in place company-wide, where those were no longer appropriate dress code for the office, even on casual Friday. Workout wear was not allowed as part of the wardrobe. I mean, imagine if guys wore that to work!” She added that such clingy pants can make women feel relaxed and sexy, neither of which, she feels, is appropriate for the office.

If you do choose to wear yoga pants or sweats to the office, it’s all in how you style the item, said nearly all of the proponents. “I recommend pairing the sweatpant back to heels and a dressier blouse,” said Blair, the boutique owner. “It’s the traditional office-appropriate attire that will keep the look grounded and professional (and prevent the wearer from getting fired!) The juxtaposition between casual and dressy can be a bit of a dance, but when worn well it’s playful and au courant.”

Monaco, the stylist, said “The right such pant, paired with other items with clean lines, such as a simple tee, a blazer, and office-appropriate heels, would be appropriate for even a business attire setting. Part of the appeal of these pants is that their sporty look conveys a certain air of cool confidence, which may be a message you want to convey in the work place. On the other hand, wearing such pants with anything resembling a sweatshirt risks sending a sloppy message.”

“The best way for someone to determine whether it’s ok to wear athletic pants (fashion or workout) to work is simply to look around,” Monaco said. “Is everyone else in suits and day dresses? Probably not a good idea. Jeans and t-shirts? Might be ok.”

So–if paying hundreds for elevated workout wear is your thing, and your workplace would approve, then you do you.

“I’m not saying to break the bank and spend your child’s tuition on yoga pants,” said Karen Nuccio, of the luxury fitness company Warrior strategy in New York. “But putting a value on our health and having symbols that remind us that it’s important is not a bad thing..

“The $10,000 watch never lowered your blood pressure….but those $400 sweatpants that you took yoga in, well…that did!”