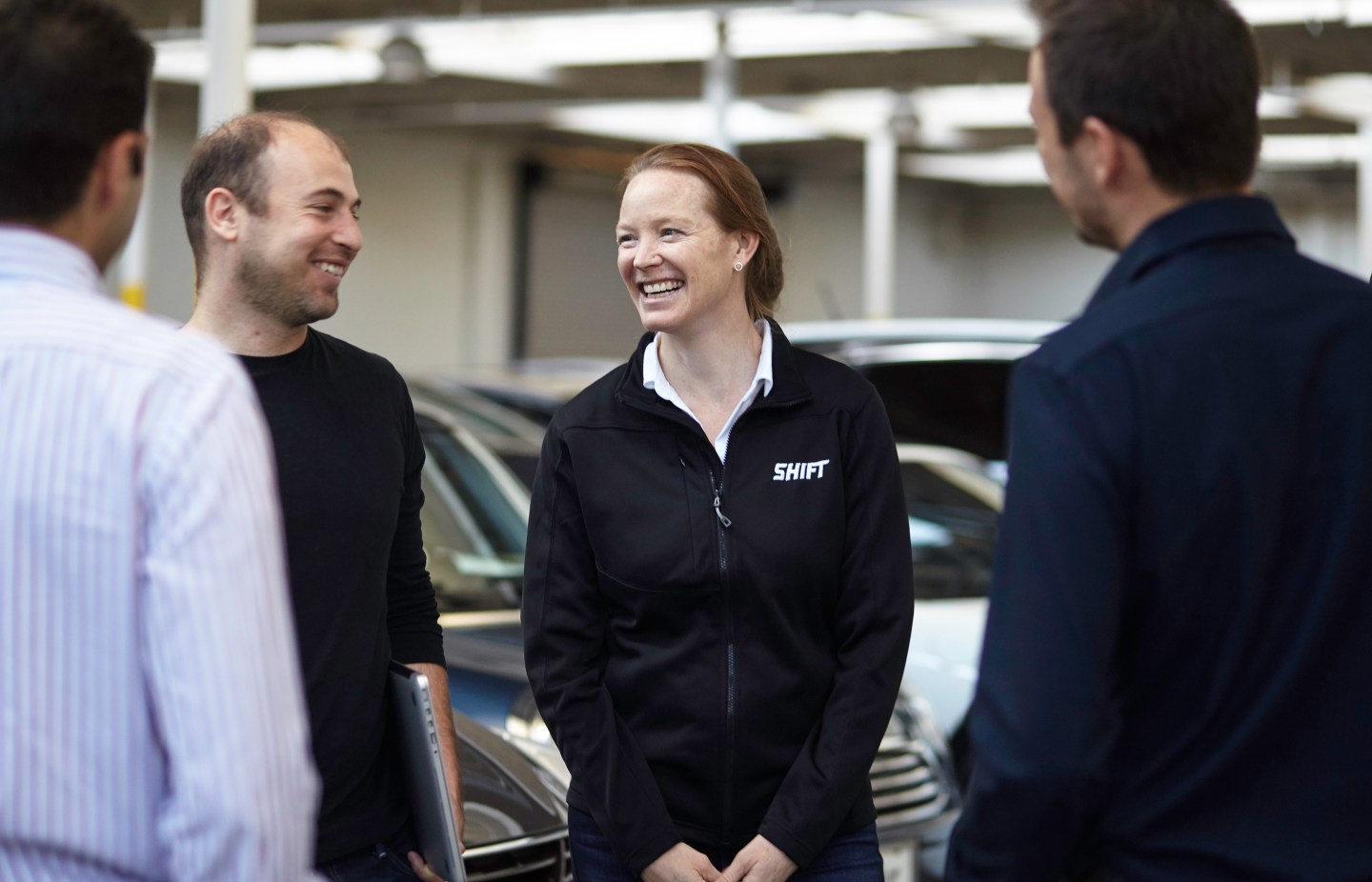 “We have two goals today,” Minnie Ingersoll tells me excitedly, pointing toward a series of foamy white waves. The first is that we’ll get our heads wet, she explains. The second is that we’ll want to come back. And then we agree there’s a necessary third objective: that we don’t drown.

Moments earlier, I met Ingersoll in the parking lot at Pacifica State Beach, a crescent-shaped shore south of San Francisco. It’s a spot known to locals as Linda Mar Beach and instantly recognizable for its beachside Taco Bell and as a beginner-friendly cove filled with barneys—that is, novices—clinging to long, wide boards. It’s a blindingly bright Monday morning, and the stretch is already crowded with newbies, skilled surfers, and a few tentative but appreciative onlookers.

We are also here to surf, one of Southern California native Ingersoll’s beloved pastimes, along with kite surfing and competing in triathlons. We have equally fair faces, so to protect us from the harsh morning rays, I grab the bottle of SPF 50 I keep in my car and we slather it on.

While this is my first attempt at surfing, I’m in capable hands. Ingersoll is known for converting friends—her “surf posse,” she likes to call them—and even organizing company surf trips for Shift, the company she co-founded two years ago with fellow Google alums George Arison, Morgan Knutson, and Christian Ohler, as well as Joel Washington, who previously worked in venture capital.

Shift, like several competitors heating up the category, inspects used vehicles, holds them in storage, and handles photos and the web listings. To get its cars to potential buyers, the company employs a small army of Car Enthusiasts (that’s their official title) who bring test drives right to potential customers’ doors. There’s no obligation to buy, and Ingersoll even notes that she wishes more people would use the site as an educational tool. For instance, customers can use Shift to figure out the difference between two minivans—Ingersoll’s own latest acquisition—by test-driving a pair of models that Shift has on hand. Lest anyone try calling it the Uber of used cars, it’s worth noting Shift’s enthusiasts aren’t paid on commission.

Growing up in Pasadena, Ingersoll’s father taught her to surf at a young age. But she really committed to hanging ten when she was working at Google (“GOOG”) from 2002 to 2014. Commuting from San Francisco to Mountain View, she would stop at this very beach to catch some relaxing, head-clearing waves before work. It’s easier to shrug off a missing PowerPoint slide with sand between your toes, she jokes.

Prior to that, while studying computer science at Stanford, Ingersoll was a teaching assistant for Marissa Mayer. After earning her MBA at Harvard Business School, she was eager to return to the Bay Area. In 2002, she dove in at Google, working on AdWords, municipal WiFi, and also eventually launching Google Fiber. There was a notion that because she’d built one ISP, she could create another, Though she adds—as she helps zip up my wetsuit—working on wireless versus a wire line are very different.

Ingersoll never had her eye on entrepreneurship. The way she saw it, she was working in an entrepreneurial way, leading lean projects within a massive organization. “I really thought Google was the greatest place to work,” she says. But it helped that physically engaging hobbies like surfing kept her grounded in demanding corporate roles.

While on maternity leave with her second child and trying to sell her old BMW to flaky potential buyers on Craigslist, Ingersoll realized firsthand how frustrating it can be for buyers and sellers on the secondhand auto market to build trust—let alone deal with financing. She agreed to be an angel investor when her friend and former colleague Arison discussed starting the company that would become Shift. Then, Ingersoll ended up selling her beloved ride to a dealer, taking far less in trade-in value than she knew she deserved. Disheartened by the experience, she took the plunge and joined Shift’s founding team as its chief of operations.

Buying or selling a used car is like trying to assess the surf. That is, that market is always fluid, and it can be difficult to calculate or anticipate fluctuations. For instance, six-year-old navigation system might be basically worthless, whereas a newer, aftermarket one could improve a car’s value. Leather seats, meanwhile, can be like a big wave—everyone wants to ride on those. Kelly Blue Book pricing may not always always reflect these nuances, which is why leaving those kinds of calculations to a company like Shift means buyers and sellers get a better deal.

“I want technology to empower transparency,” Ingersoll explains as we sit perched on our surfboards, noting that the company’s robust analytics is also able to predict how long it might take a particular vehicle to sell. She adds that after buying a home, a car is often consumers’ biggest purchase. “You don’t want to screw that up.”

Toward the goal of streamlining the used car-buying process, Shift just closed a $50 million Series B. The cash infusion will enable the company to work on expanding to an additional 20 more markets by the end of 2016. Right now, Shift is only in San Francisco and Los Angeles. Because her friends and family invested in the company early on, Ingersoll says now more than ever, “There’s a lot more riding on me getting stuff right.”

There’s not nearly as much riding on, well, riding a wave. She leads me into the surf, a nine-foot, green, soft-top board tied to my left leg as we bob along. I lie down, treating the green monster like a boogie board. When she sees the perfect breaker coming in, she gives me a strong push toward land. I hang on, screaming with joy as I cruise toward the shore. I hear the waves crashing inches behind me. Never once do I tip over or go under.

After my last tide, I’m sitting on the warm sand where Ingersoll joins me, beaming. “Do you want to try standing up?” she asks. I do, but I also want to be sure we meet our goals. Even while blowing saltwater out of my nose with my tangled hair wrapped around my head, I still want to come back and do this again. I figure if we stop now, I have something to look forward to next time.

And there will be a next time. “You totally shredded today!” she says as we walk back to our cars. “A bunch of us are going again this weekend. You should come! I’ll make you one of our mixed CDs of surfing tunes.” Funny enough, my 28-year-old diesel Mercedes—ancient by auto standards but the most dependable used car I’ve ever owned—actually has a CD player. And just like that, I’m in the surf posse.