The American recycling business is a mess: Can Big Waste fix it? 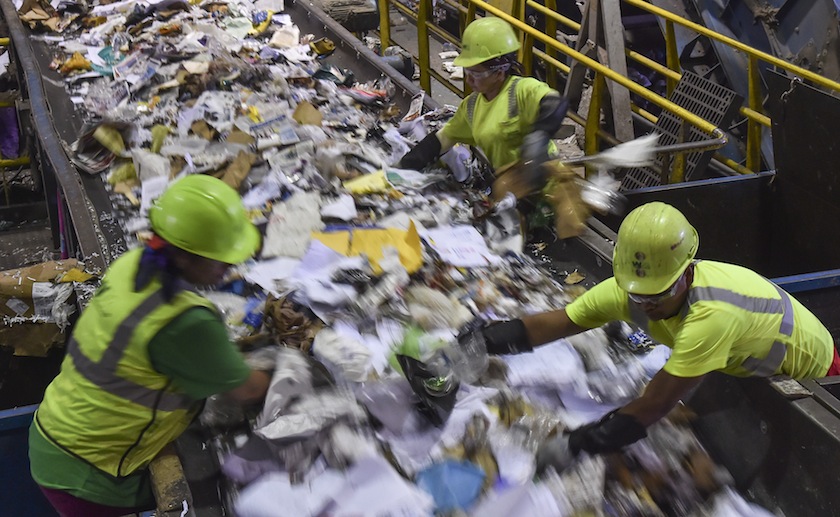 In 1987, a tugboat named Mobro 4000 set out from New York Harbor with more than 6 million pounds of decaying waste collected from across New York City. The trash-bearing vessel was bound for a landfill in North Carolina, where it was refused. It then wandered as far as Mexico and Belize, looking for a place to unload.

Newspapers followed the tugboat’s 5,000-mile voyage, sounding alarm bells over a national garbage crisis. Johnny Carson led The Tonight Show by suggesting the Mobro make a beeline for Iran, and a New York Times editorial called it a “floating Paul Revere,” warning Americans of the threat of their trash.

After months of rejection, the barge eventually returned with its trash to New York, where it was festooned with an enormous banner, drawn up by Greenpeace activists, that read, “Next Time Try Recycling.” Suddenly, America had to pay attention to its garbage problem.

In 1988, Houston-based Waste Management, the nation’s leading garbage hauler, launched its first large-scale curbside-recycling program under the direction of a man named Bill Moore, the company’s first recycling director. At the time, only about 10% of the country’s trash was recycled. But throughout the 1990s and 2000s, recycling programs mushroomed across the country: by 2015, the recycling rate had more than tripled, and Waste Management had become the largest residential recycler on the continent. The runner-up, Republic Services, recycled almost 5 million tons in 2014; Waste Management (WM) recycled more than 15 million tons.

Today, the company’s biggest challenge has little to do with the competition—it’s the business of recycling itself that’s the problem.

Profits across the recycling industry have been in free fall, due to technical challenges, changes in both manufacturing and consumer behavior, and waning demand for recycled materials. Since 2011, Waste Management’s earnings from recycling have declined by $200 million. During some quarters, it has lost money on the business. By the end of the year, it will have shuttered 10% of its recycling facilities, with another 10% under consideration for closure. Other recycling companies have closed shop completely.

“This is a crisis for the future of recycling,” David Steiner, the CEO of Waste Management, says. “Momentum has been up, up, up for the last 20 years, and now, it’s stalling. It’s down, down, down.”

The U.S. recycling rate began to stall at around 34% of all waste in 2010. And while most recycling experts agree that the business needs to evolve, few have addressed the problem with as much urgency as Waste Management.

America’s trash is a commodity, just like oil or wheat. Once a company like Waste Management processes and sorts the items that get thrown in the blue bins, the bales are sold to manufacturers, often in China. But for the past few years, the value of these bales has fallen dramatically— between 2013 and 2014, the price of recycled corrugated cardboard dropped by almost 24%.

The markets are cyclical, and recycling has seen many ups and downs before, says Bill Moore, who is now the president of recycling consulting firm Moore & Associates. But the current doldrums have been especially long and taxing, in part due to low oil prices. Since plastic is made from petroleum, rock-bottom oil prices mean that it’s cheaper for producers to simply make new plastic than use recycled material. The problem is compounded by the softening economy in China. As its exports dwindle, so does its once-ravenous appetite for the recycled material used to produce them. Steiner says he still doesn’t see a bottom to the price decline.

But the industry’s problems go deeper than that. American habits are working against recyclers: Between 2000 and 2013, the amount of paper and paperboard Americans have sent to facilities has dropped 22%. Meanwhile, the volume of plastics—which are less lucrative because their diversity and lightness make them harder to sort—has increased by 27%. And plastic is becoming even more lightweight as companies introduce packaging that uses less material, resulting in containers that take up the same amount of space but offer less resale value to recyclers. These changing material ratios—what the industry calls an “evolving ton”—have led to higher processing costs for recyclers, as they have to push much larger volumes of waste through their facilities to yield each one-ton bale of raw material.

The evolving ton also includes more items than ever that simply aren’t recyclable, like dirty diapers, animal carcasses, syringes, and plastic bags. Waste Management says that contamination of its recycling stream has doubled in the past decade. Now, an average of one in six items dumped in blue bins is not recyclable, gumming up processing facilities and jacking up costs. Some recycling facilities have to shut down once an hour so that workers can cut layers of plastic bags off the machinery. That’s because of what Sharon Kneiss, the CEO of the National Waste and Recycling Association, calls “aspirational recycling”—a habit of throwing non-recyclable materials into bins because they might or should be recyclable. But Kneiss’ term may be a little too generous: the rise of contamination in the recycling stream can also be attributed to pure laziness. In one National Waste and Recycling Association survey, nearly one in ten Americans admitted to throwing their waste in recycling bins when trash cans were full.

The recycling system’s quality problem is often linked to single-stream recycling—a sorting method that Waste Management pioneered in 2001. With single-stream recycling, customers simply chuck all of their recyclables into one bin, as opposed to sorting the glass, paper, and metal separately. Since the bins are so large and the process so thoughtless, the method has increased the recycling rate by an average of 30%. “Single-stream is not the system that leads to the highest quality of recyclables,” Container Recycling Institute President Susan Collins says. “There are consequences if you mix them together: you can’t unscramble an egg.”

Even recyclable materials can be ruined by the process and become useless “residuals,” such as plastics contaminated by broken glass. According to one study, no-sort recycling yielded four times more residuals than dual-sort. But because of its convenience and up-front cost-savings, it has become America’s sorting method of choice. Steiner conceded that it was “probably fair” to say Waste Management created some of its own problems by leading the single-stream recycling trend. The company then backtracked: “I wouldn’t say that we shot ourselves in the foot, because it created more recycling,” he said. “But we need to think about how to create more recycling at a higher profitability.”

Waste Management and recycling experts agree that all of these factors—the commodity price downturn, the evolving ton, and rising contamination—has led to what Kneiss refers to as a “perfect storm.” But when you ask what to do about it, that consensus quickly devolves into finger-pointing—at recycling companies like Waste Management for failing to innovate, at the American public for their lazy recycling habits, at producers for creating plastic packaging that is increasingly difficult to recycle, and even at the federal government for not passing strong legislation that encourages better practices.

Recycling is not free—that’s something everyone can agree on—and Waste Management has been pursuing solutions city-by-city to make recycling sustainable and protect itself from losses. In some cities, like San Antonio, Texas, Waste Management simply closed its plants; in other cities, the company is auditing waste streams and strictly enforcing years-old contract agreements with cities that commit to not going above a certain percentage of contamination. The company has also renegotiated contracts to allow Waste Management to use recycling revenues to cover the cost of processing before splitting the remaining earnings with cities. Meanwhile, Steiner is focusing on educating people to recycle properly—a crusade that will not only revive stalling recycling rates in the country, but shore up the company’s profits.

Not all recyclers are thanking Steiner for saying that the business is in “crisis,” in part because the executive’s warnings have sometimes turned apocalyptic. Steiner has threatened in the pages of The Wall Street Journal and elsewhere that, if no solutions are found, the end of recycling could be nigh.

“Yes, there are some issues with the recycling system, but they are not issues that cannot be managed and improved,” the Associated Recyclers of Wisconsin wrote in a press release. “Let’s not fall into the trap of using words like ‘crisis’ to describe the current state of cyclical market conditions.”

Minneapolis-based recycling non-profit Eureka Recycling issued a blistering note criticizing Waste Management for trying to “play victim to single stream recycling” after spearheading the method’s adoption. Many of the environmentalists who responded angrily to Steiner beseech readers to, as the Minneapolis non-profit wrote, “think about ‘profits’ a little more broadly” to include the job creation and environmental benefits that recycling brings.

But Steiner says he doesn’t foresee a day in which Waste Management is out of the recycling business altogether. Rather, he says he has been vocal on the recycling downturn because he wants to see systemwide changes in the industry that can revive stalling recycling rates and protect recyclers from the whims of the commodity markets. “We need to figure out as a country, do we want a global solution to this, or do we do one-off solutions?”

Steiner rattled off ideas like national legislation requiring a certain amount of recycled content to be used in packaging of new products, or removing glass from the recycling stream because it often breaks during collection and mucks up the rest of the load. There’s also “extended producer responsibility,” already popular in Europe, which shifts some of the costs of recycling into the prices of products themselves. None of these fixes can come from Big Waste alone: they require a surge in public concern to lift the unsexy issue of garbage onto politicians’ agendas.

“It takes a crisis to get action sometimes in politics,” Steiner says. And while he can’t provide news teams with a feast of wandering trash barges to broadcast across the nation’s screens, the CEO has made himself the industry’s leading voice by ringing the alarm bells. Moore says that he gives the man credit for “taking a macro educational role”—one that might convince everyone involved that the business of recycling is due for a paradigm shift.