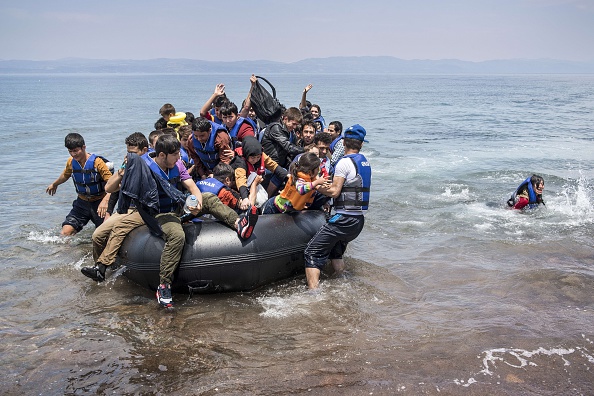 Refugees from Afghanistan arrive on the shores of Lesbos on June 2, 2015. They are the lucky ones.
Photograph by Soeren Bidstrup — AFP/Getty Images

As the refugee crisis continues to escalate in Europe, stories about the human toll that this takes on families trying to escape the war in Syria keep hitting the airwaves, including a recent news item about a truckload of more than 70 refugees who died of heatstroke in Austria, victims of a smuggler. On Wednesday, another soon-to-be iconic image of the crisis was published on a number of news sites: A picture of a young Syrian boy’s lifeless body, washed up on the Turkish seashore.

The image of the boy, reportedly a three-year-old named Aylan Kurdi, triggered a debate not unlike the one that reverberated through the media-sphere after the shooting of Virginia journalists Alison Parker and Adam Ward last week, gunned down by a disgruntled former co-worker who shot live video of himself doing the deed.

The fact that social networks such as Twitter and Facebook tend to auto-play embedded videos and auto-show photos in a user’s stream became part of the discussion, since those settings force people to see such disturbing images whether they want to or not. But there’s a larger issue, which is the question of whether we have some kind of public duty to watch these horrific scenes, in order to force ourselves to confront the reality of the violence that is taking place around us.

Gawker writer Sam Biddle, among others, made this argument about the picture of Alison Parker being shot that appeared on the front of the New York Daily News after her death. He said ignoring these kinds of incidents is part of the problem with gun violence, and that we owe it to ourselves and the victims to look at them at see what our decisions about gun control and mental health have produced. As Biddle put it:

“Horror is healthy and normal, and means your brain is working as intended. It’s a useful response, because it might convince you—it might force you—to viscerally react to our nation’s epidemic of gun violence. If so, it will be worth the discomfort.”

In the case of the young Syrian boy, a number of media outlets including The Independent decided that it was necessary to show the photo of him lying lifeless on the beach, because it symbolized the human suffering refugee families are going through. In other words, it was a tangible sign of specific political decisions that are being made in places like the British parliament and the European Union — and even the U.S. Congress — that can have horrific personal consequences.

The photo I’m referring to appears at this link. It’s not graphic but it is disturbing. When I asked on Twitter whether we need to force ourselves to see these kinds of images, a large number of people — including some journalists — said no, that they are too horrific, and that we don’t need to see them in order to be aware of the human cost that the refugee crisis is having.

Others, however, argued that we do need to see them, and that it’s quite easy to become inured to the death toll and other repercussions of European political decisions. But the sight of a tiny boy’s lifeless body washed up on the sand in Turkey makes an incredibly powerful statement about personal loss. Even some parents with children of similar ages — whom you might think would be the most hard hit by such an image — said that they believed it was necessary. The Independent said:

“The Independent has taken the decision to publish these images because, among the often glib words about the ‘ongoing migrant crisis,’ it is all too easy to forget the reality of the desperate situation facing many refugees.”

One risk that a number of people mentioned when it comes to violent imagery is the potential for viewers or readers to gradually become immune to their effects, while others said it could trigger emotional distress for those who have lost children of similar ages. But many said that precisely because the photo is so powerful, it could become a symbol of the fight for refugee protection. This is the position that I tend to lean towards, despite the distress caused by the image.

What is offensive is dead kids washing up on our beaches when deaths could have been prevented by EU action, not the pictures themselves.

There are a number of cases where an iconic photo became the symbol of a larger political issue, or turned the tide against a particular course of action. The picture of a Vietnamese insurgent being shot in the head at point-blank range helped sway opinion against the war, as did the photo of a young girl running down the road naked, having been burned by U.S. napalm strikes. A picture of a dead school boy is credited with helping to turn the tide against apartheid in South Africa.

In most cases, we never know what the most powerful symbolic image is going to be until after the fact, which makes it difficult to pick and choose which images to show and when. And then there’s the reality of social media, which surrounds us with video clips and imagery all the time, in a way that was never possible during the Vietnam War or apartheid. Have we become so inundated with such imagery by now that even a single powerful image no longer has any effect on us?