Social media gives us a front-row seat for the Roanoke shootings, whether we want it or not 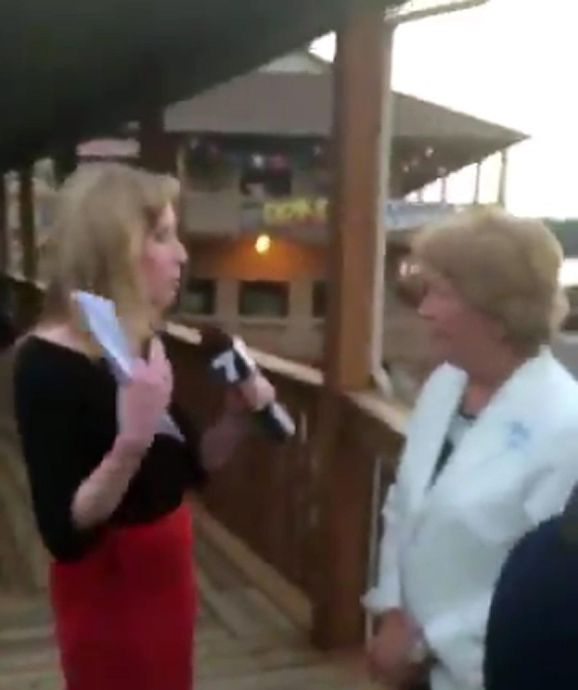 US journalists shot dead on air. Videograb taken from the video posted by Lester Lee Flanagan, known as Bryce Williams, just before the shooting of WDBJ reporter Alison Parker (left) and her cameraman Adam Ward, not in picture, as they worked on a live broadcast at a shopping centre in Moneta, central Virginia. Issue date: Wednesday August 26, 2015. See PA story US Shooting. Photo credit should read: PA Wire NOTE TO EDITORS: This handout photo may only be used in for editorial reporting purposes for the contemporaneous illustration of events, things or the people in the image or facts mentioned in the caption. Reuse of the picture may require further permission from the copyright holder. URN:23919889
Photograph by PA Images

In the not-so-distant past, if a gunman shot and killed someone, we would usually find out about it from a TV news program or a newspaper or radio broadcast, and we would only see or hear what an editor or producer wanted us to. But now, when an incident like the on-air shooting of Virginia journalists Alison Parker and Adam Ward happens, many people find out about it because it shows up in their Twitter stream or their Facebook newsfeed—in some cases, complete with a video that starts playing automatically.

Is this a good thing or a bad thing? Is it better to have that kind of information so that we can make our own judgements about what is newsworthy and what isn’t? Or does it just traumatize and de-sensitize people to see such behavior, and inspire other killers to seek similar kinds of free publicity via social media?

This is no longer an academic debate to be had in journalism departments or TV network news meetings. It is something we are all involved in, both as consumers and increasingly as distributors of breaking news via social media. And in many cases the ultimate decision about what we should or shouldn’t see is being made by the social platforms that have taken over the editorial gatekeeping role from newspapers and TV networks. But is that really an improvement?

Part of what made the shootings on Wednesday unusual is that the gunman was a former employee of the Roanoke TV station, who appears to have harbored a grudge towards his employer. He clearly wanted the killing to occur on live television, since he chose to shoot his former colleagues during a live broadcast at a local water park. He later killed himself while being chased by police.

Within minutes of the shootings, video clips from the live newscast appeared on Twitter, Facebook and Instagram, and in many cases started auto-playing as users scrolled past them. The video isn’t graphic, but you can hear screams and see the killer advancing on his victims. Although almost all of these social platforms allow users to turn off automatic playback (with the exception of Instagram) auto play is the default, and many people likely haven’t taken the time to change it.

I REALLY wish I hadn't seen the video of the two reporters being shot. Thanks to Twitter autoplay, people don't have much of a choice.

This meant that many users were surprised by the footage, whether they wanted to be or not. Some said they were planning to spend the day away from any form of social media for just that reason—because they didn’t want to be subjected to watching the clips over and over.

But Vester Flanagan went one step further than just shooting his victims on live television: He also recorded the killings with a portable video camera, and uploaded a clip of the incident from his perspective to Twitter and Facebook. In addition to the videos, he posted comments about how he had allegedly been the victim of racist remarks and other attacks by his former colleagues.

Twitter and Facebook both acted quickly to remove Flanagan’s accounts and the videos he posted (according to one estimate, it took Twitter just eight minutes to do so), but by that point the video clips were already being distributed by news outlets and social media users.

This triggered an even more heated debate among members of the media and those sharing the tweets and videos: Is it good that killers like Flanagan can post and distribute such things themselves, since it gives us insight into their intent, not to mention fairly convincing evidence of their guilt? Or is it bad because it just encourages other killers to become full-fledged social-media entities, so that they can achieve the publicity and notoriety that they crave?

Media: If you show the shooter's video, you will only inspire more to get attention by doing the same. Do not be his accomplice.

As the hours passed in the wake of the shootings, CNN and other news outlets debated whether to show the video of the attack that the news crew filmed. CNN at first said it would only show the video once per hour, and then later it said it would not show the clip at all. But it didn’t really matter, because the clip had already been posted hundreds of times—at which point, the streams of many journalists, including me, turned into a debate over the ethics of posting the footage.

For some, the decision of whether to show the video is no different than deciding whether to show footage from a war zone of people being killed, which they pointed out happens all the time—the obvious implication being that this was only different because the people in it were white journalists, killed in the U.S. rather than some foreign country.

If it weren't journalists involved it would've been posted as normal reporting. Can't have double standard. https://t.co/12MmNn1cDF

A number of journalists, and many non-journalists, argued that embedding or distributing the video was just a standard part of reporting on a news event, although some said that mainstream media outlets should avoid auto-play, and post a warning about graphic content. Others said that it was okay to link to the video (as the New York Times did), but not to publish it. But if it was okay to post videos of people like Walter Scott being killed by police, some argued, then why not post the Roanoke videos?

Many people said they didn’t want to see either one of the Roanoke videos, and in some cases wished they hadn’t watched them. Some said it was disrespectful for CNN or anyone else to show video of someone dying in such a way, while others said news outlets that used the videos were clearly being driven by the need for traffic and viewers, rather than journalistic principles.

Can we collectively agree to unfollow any news outlet that uses the shooting video for clicks?

Increasingly—as with the debate over whether to publicize users of Ashley Madison, or the videos that ISIS posts of terrorists beheading social workers and other innocent civilians—these kinds of decisions are having to be made not just by media outlets, or by Facebook and Twitter, but by all of us. Every user of social media is a publisher and a distributor of news. In the end, we all decide what standards of conduct or morality we are going to uphold, and it’s not getting any easier.