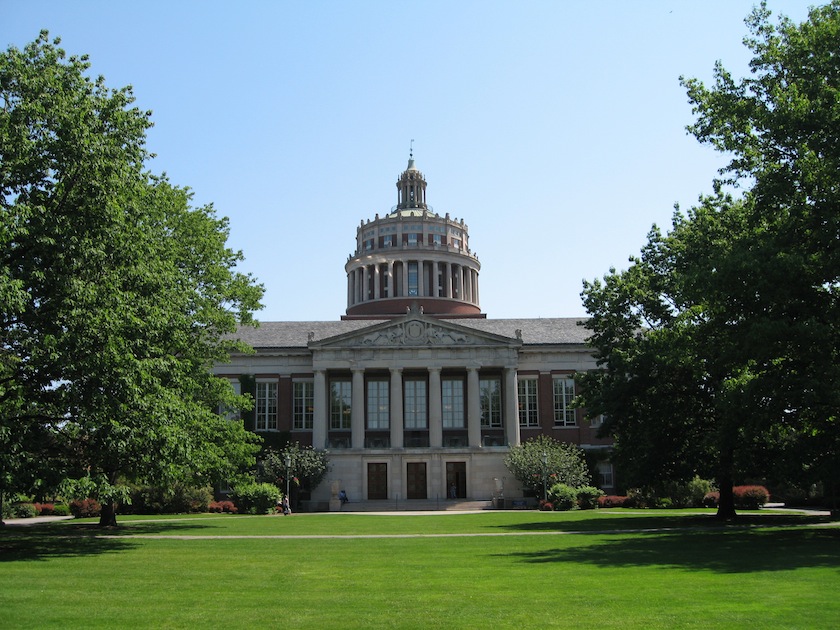 (Poets&Quants) — In an unprecedented move for a highly ranked business school, Simon Business School at the University of Rochester announced on Wednesday that it is cutting the total tuition of its full-time, two-year MBA program by 13.6% to $92,000. The lower rate, falling from the $106,440 it is charging students coming into the 2015-2016 academic year, will be effective for MBA candidates entering in the fall of 2016.

The school said it is making the move partly to provide greater transparency of the costs of the MBA to prospective applicants. In recent years, a growing number of business schools have effectively adopted a two-tier pricing model with a “sticker price” and a hidden “discounted price” based on substantial scholarship awards to the best candidates in their applicant pools. Most schools are providing between 20% and 40% overall discounts on tuition via scholarships to students in their MBA programs, though a substantial number of MBAs still pay full freight.

Dean Andrew Ainslie also said he believes that Simon’s tuition costs were higher than the costs for the MBA programs at several peer schools and needed adjustment. “We have all gotten into this habit of upping our prices 3% to 5% a year and then separately being worried about attracting the best students,” he says. “So everybody has been simultaneously raising their scholarship support.”

Simon doles out nearly $5 million annually in scholarship awards to an MBA student enrollment of just over 200, putting the school at the upper end of the range, says Ainslie. Last year, Harvard Business School spent $31.5 million on MBA scholarships, representing 28.6% of its gross tuition receipts. Stanford University’s Graduate School of Business handed out $15.7 million, accounting for 31.0% of its gross tuition. At Harvard, half of all MBA students get discounts, while 52% of the students at Stanford receive rate cuts.

“The real problem is transparency,” believes Ainslie. “All candidates know is the sticker price and we seem to be out of whack with the five schools above us and the five schools below us.” The result, he believes, is that some applicants who might have applied to Simon passed on the school. “Students do this sort of thing,” explains Ainslie. “They go to U.S. News and run their eye down the column and what they are looking for is a combination of three things: where a school is ranked, how much it costs, and what the required GMAT is to apply. We were a little out of whack on on the pricing side.”

The actual cut in tuition at Simon is even larger, on the order of 16.5%, if you take into account the typical 3.5% rise in tuition that would have occurred next year. Such an increase would have brought the cost of an MBA at Simon to $110,165. “We will be a little less generous on scholarships but still will be at the upper level of our peer schools in financial aid,” says Ainslie.

Though applications to the full-time MBA program at Simon were up slightly by about 3% this past year, the dean predicts the price cut will result in a larger applicant pool in the 2015-2016 academic year. “I have a very strong belief that this will help us attract a bigger pool of applicants,” he says. “We believe that prospective students often overlook Simon due to our sticker price despite our strengths in academics, student quality, and career placement.”

The lower price tag puts Simon more in line with Boston University’s School of Management, which currently charges $94,844 in tuition for its full-time MBA, and Temple University’s Fox School of Business in Philadelphia, where tuition for incoming students is $92,718. Simon’s MBA would be below the University of Maryland’s Smith School, where out-of-state tuition costs $104,760.

Tuition rates can sometimes mislead applicants on the true costs of an MBA. Some schools, for example, leave out many required fees from their posted tuition prices. At Temple University’s Fox School of Business, the listed full tuition for its two-year MBA is currently $92,718. That sum, however, fails to include required global immersion trips in the fall and spring semesters that tack on an extra $9,630, bringing the actual cost of Fox’s program to $102,348.

At Penn State’s Smeal College of Business, where the out-of-state tuition seems very reasonable at $76,136 for two years, the additional fees bring the total cost to $89,466, not including room and board. The fees range from a $170 charge for orientation to a $1,850 estimate for the cost of a global immersion trip.

Simon’s Ainslie predicts that the cut will actually be “fairly revenue neutral” for the school. “We are not really changing the average price,” he explains. “We are changing the sticker price. Our level of scholarship support has been so generous that this is like giving everyone a scholarship off the bat of $10,000 each. We are not discounting over all. This is just about being more transparent about our pricing.”

Simon, which is known for teaching an economists’ perspective on markets, says the economists on his faculty are pleased with the move. “This has really piqued their interest,” he adds. “In essence, what I am doing is acting like an economist. You have to look at the market conditions and align to them. Look at the data and make decisions based on the data. That’s exactly what we did here.”

How Harvard MBAs Get Those Six-Figure Jobs

A McKinsey Man Moves Into The Dean’s Office

What MBA Students Are Reading On The Web