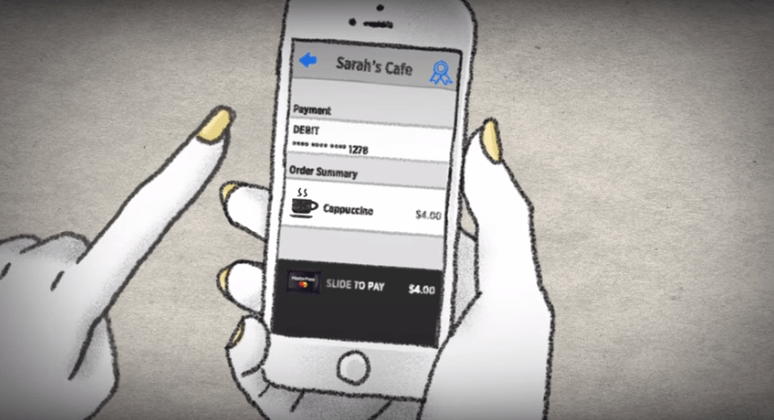 The ability to order food from your phone inside a stadium isn’t a new idea. Companies have attempted to create apps for in-stadium mobile ordering since at least as early as 2011. But none have really nailed it.

In May 2013, Entrepreneur wrote about three exciting mobile apps that would “let you order right from your seat.” They were: Bypass, SnagMobile, and Yorder. Two years later, two of those three companies appear to be defunct. (And have you heard of any of them?)

The San Francisco 49ers, in the design and building of a fancy new $1.4 billion football stadium, aimed to bake in advanced technology to the venue, including fast and free Wi-Fi signal and the ability to order food from your phone. But when the stadium opened a year ago, Deadspin reported, the Wi-Fi was patchy and some fans who ordered food from their phones hadn’t received it after an hour and a half.

Now MasterCard (MA) thinks it may have made some progress in the space. Its app Qkr—the name follows recent tech app naming rules with its winking, vowel-free shortening of “quicker”—offers mobile ordering not only at sports stadiums but also concert venues, cafés, schools and other businesses that sell food or merchandise for pickup or delivery. (For example: Japanese chain Wagamama and Marcus Samuelsson’s Streetbird Rotisserie in New York.)

Qkr launched in 2012 in Australia, and in the U.S. in 2013 at Yankee Stadium. Users download the app, sign in or sign up for MasterCard’s digital wallet MasterPass (which powers Qkr), then order and pay from a merchant within the app. And they can use any major credit card, not just a MasterCard, to do so.

Qkr is available at sports venues like Yankee Stadium and the Air Canada Centre in Toronto, and it was available at two recent PGA Tour events: the Arnold Palmer Invitational in March in Orlando, and The Barclays this month in Edison, N.J.

Now MasterCard has exclusively shared with Fortune some data that suggests fans are finally ready for mobile ordering at a stadium—when it works—and tend to order more food when they do it.

In the past year, average sales volume at merchants that offer Qkr rose, in some cases by as much as five times.

For orders delivered to fans at their seats (i.e. orders at sports or concert venues), those for beverages went up by more than 4.16 times, orders for food and beverages together rose 8.23 times, and the total number of orders was 5.8 times higher. The average wait time was nearly cut in half, from 15 minutes (between placing the order and receiving the delivery) to nine minutes. For pickup orders at stadiums, the average Qkr order was 35% larger than non-Qkr orders—so customers were spending more—and 46% of them ordered a second time.

If you ask Betty DeVita, chief commercial officer of MasterCard Labs, the numbers show that, “Everyone is walking around with their mobile phones and commerce is logically evolving. But that’s only the tip of the iceberg. A host of different venues… can tap into mobile to impact sales in a meaningful way and create a truly priceless fan experience.” (Get it? “Priceless” has been MasterCard’s primary marketing slogan for 18 years.) MasterCard Labs is the company’s in-house innovation shop, led by Irishman Garry Lyons, personally tasked by CEO Ajay Banga with beefing up MasterCard’s tech.

Of course, MasterCard isn’t the only payment giant with a mobile food-ordering app on the market. In June, Dunkin’ Donuts (DNKN) began letting customers pay for an order on the Dunkin’ Donuts app using Visa Checkout. And MasterCard’s data comes from a small sample size—the company would not say how many users Qkr has had, or at how many venues the app is available.

But if even a few thousand people have tried Qkr at a sports mecca like Yankee Stadium, and it pumped up sales for stadium food vendors, then this may signal a new behavior—one that sports venues had better cater to, whether using MasterCard’s app or someone else’s, or risk becoming obsolete.