Why the Solyndra mistake is still important to remember 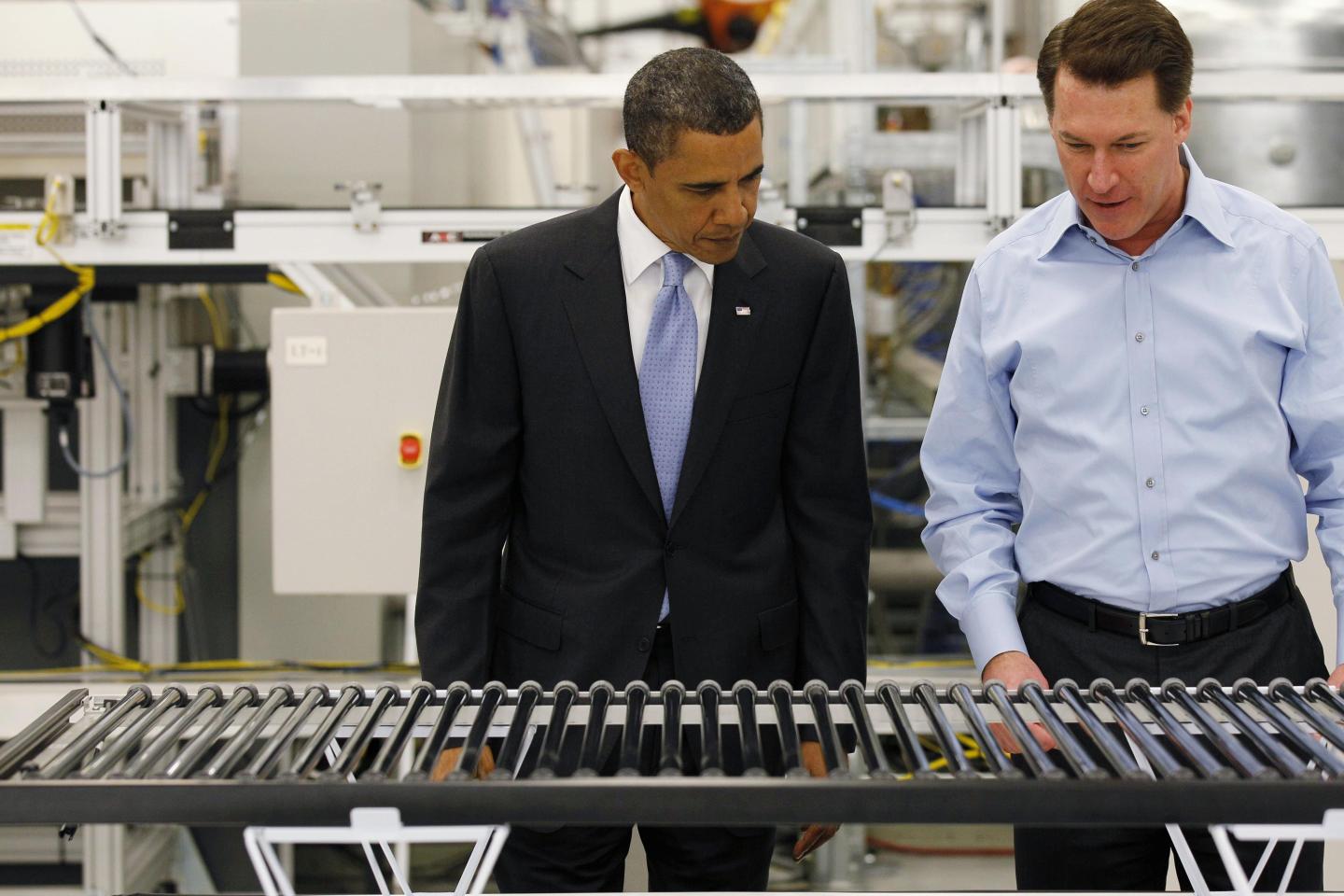 FILE--In this May 26, 2010 file photo, President Barack Obama, with Solyndra Chief Executive Officer Chris Gronet, looks at a solar panel, during a tour of Solyndra, Inc., a solar panel manufacturing facility, in Fremont, Calif. Solyndra received a $535 million loan from the U.S. government has announced layoffs of 1,100 workers and plans to file for bankruptcy. (AP Photo/Alex Brandon, File)
Photograph by Alex Brandon — AP

Almost exactly four years after solar panel startup Solyndra filed for bankruptcy, the ghost of the company has now risen again, for seemingly the umpteenth time. And no it wasn’t from another awkward Republican Presidential debate.

This time the haunting is in the form of a report from the Inspector General’s Office, which after more than four years of investigation, concluded that Solyndra officials used inaccurate information to mislead the Department of Energy in its application for a $535 million loan guarantee. The report also found that there were shortcomings with the DOE’s process of managing and approving the loan guarantee to Solyndra.

Solyndra of course is the once much-hyped solar panel startup that raised over a billion dollars from private investors and lost $5oo million of tax-payer funds, in the form of a loan backed by the DOE, when the company later went bankrupt.

The loan program was created under the Energy Policy Act of 2005, but Obama’s stimulus plan first funded it. Loan guarantees basically says the government will pay back the loans to a company if borrowers can’t. In many cases, like in Solyndra’s case, the government also provided the loans as well, via the Federal Financing Bank.

Anyone who’s followed this story closely for the past few years won’t be surprised by the report, but some of the details of Solyndra’s executives’ deception are laid bare. The details are worth reading because they are actually similar to tactics Silicon Valley startups sometimes use when raising money, telling their stories to the press, selling their goods, and negotiating business with partners.

These not-so-uncommon deceptions are writ large because of the enormous size of the Department of Energy’s $535 million loan guarantee, because of the large size of the contracts with customers (hundreds of millions of dollars) and because of the political and media spectacle that emerged around Solyndra after its bankruptcy. More than anything, the report highlights that a startup as high-risk as Solyndra should not have ever been considered for such a large loan guarantee from the federal government.

If you don’t remember the whole story of Solyndra, the company was making tubular solar panels using a thin, next-generation solar material and a lightweight racking system where the panels were installed. The company said big power companies would pay a premium for its solar panels, partly because the panels would save them money during the installation process.

The company raised more than a billion dollars from investors such as Madrone Capital (a fund associated with the Walton family, the heirs to the Walmart fortune), RockPort Capital, Redpoint Capital, the George Kaiser Family Foundation, and others. In addition to backing from private investors, Solyndra was the very first company to score the loan guarantee from the DOE’s newly-funded program, and the loan was also one of the largest given out (similar in size to Tesla’s).

Solyndra went bankrupt because its costs were far too high, its only customers were paying for its panels at a discount, and the cost of solar panels in China were beginning to drop dramatically. Instead of finding customers willing to pay a premium for its new panels, its solar developer customers could head to China and buy cheap panels there.

The most damning evidence in the Inspector General’s report focuses on Solyndra’s sales contract commitments with its power company customers. Solyndra officials originally said in its loan guarantee application process it had four contracts that were worth a total of $1.4 billion, or hundreds of millions of dollars each. Later the company cited sales contract commitments of $2 billion with additional customers.

But during the investigation, the Inspector General’s office found that some of those customers had asked for, and were given, orders at discounted prices, and for much lower volumes than the contracts stated. Still other customers had no future business committed to Solyndra. The $1.4 billion, and later $2 billion, weren’t booked revenues, they were aspirational contracts that weren’t binding.

The report says “the company internally forecasted that contract customers collectively wanted to purchase more than $700 million less volume than that exhibited in the sales contracts.”

One Solyndra customer who ended up buying lower volumes of discounted solar panels told investigators that Solyndra assured them through a side verbal agreement that his company wouldn’t have to buy the high volume stated in the contract.

Solyndra’s use of inaccurate info was extreme even for a startup. The report says:

Solyndra officials were, at best, reckless and irresponsible or, at worst, an orchestrated effort to knowingly and intentionally deceive and mislead the Department

But it’s hard to prove if it was wishful thinking or knowing deceit. Maybe a little bit of both.

At the same time the Inspector General’s report found that Solyndra had at one point given more accurate sales contract updates to a DOE consultant in 2009 and that consultant didn’t alert the DOE to the significance. Solyndra also sent over a spreadsheet to the DOE that showed missed revenue projections, but DOE consultants staff didn’t study the document closely enough to realize its significance.

After Solyndra’s bankruptcy, the FBI joined the Inspector General’s investigation. In early 2015, the Department of Justice decided to not pursue criminal prosecution of Solyndra officials.

In response to the report, Miles Ehrlich, an attorney for Solyndra’s former CEO Chris Gronet, issued a statement that said:

There were no false or misleading statements by anyone at Solyndra, and these so-called “findings” were never supported by the evidence. These exact same allegations were investigated up, down, and sideways by three of the most experienced and aggressive federal prosecutors offices in the country—and each time they rejected this DOE spin as contrary to the actual facts. It is disappointing that a federal agency would publicize discredited accusations, knowing that they will never have to be tested by actual evidence, a trial, a jury, or any measure of basic due process.

It’s not that uncommon for startups to exaggerate sales, exaggerate the nature of contracts, to boost growth predictions, and to leave out unflattering information with investors, the press and customers. For Solyndra, the discrepancy was the backbone of a $535-million loan guarantee, which was the big problem.

In the report, the Inspector General places more blame on Solyndra officials than DOE executives that failed in due diligence with a high-risk and opaque startup. However the loan program has since stopped offering guarantees for very large amounts for these types of high-risk startups for the last several years.

The Inspector General says part of the reason for releasing the report now is so that the DOE will learn lessons and will make its due diligence process better. The DOE has another $40 billion in loan guarantee commitments available to it, and the report notes that another scandal like Solyndra could mean the end of the program. Earlier this week another $1 billion was added to the loan guarantee program, with a particular emphasis on “distributed technologies,” such as solar roofs, batteries and the smart grid.

Much of Silicon Valley, clean tech entrepreneurs and investors, and the solar industry at large have moved beyond the whole Solyndra spectacle. But it’s good to meditate over the details of why this happened and to take precautions for how not to let it happen again. The stakes of clean power, climate change and the solar industry are far too high.

To learn more about the solar industry watch this Fortune video: