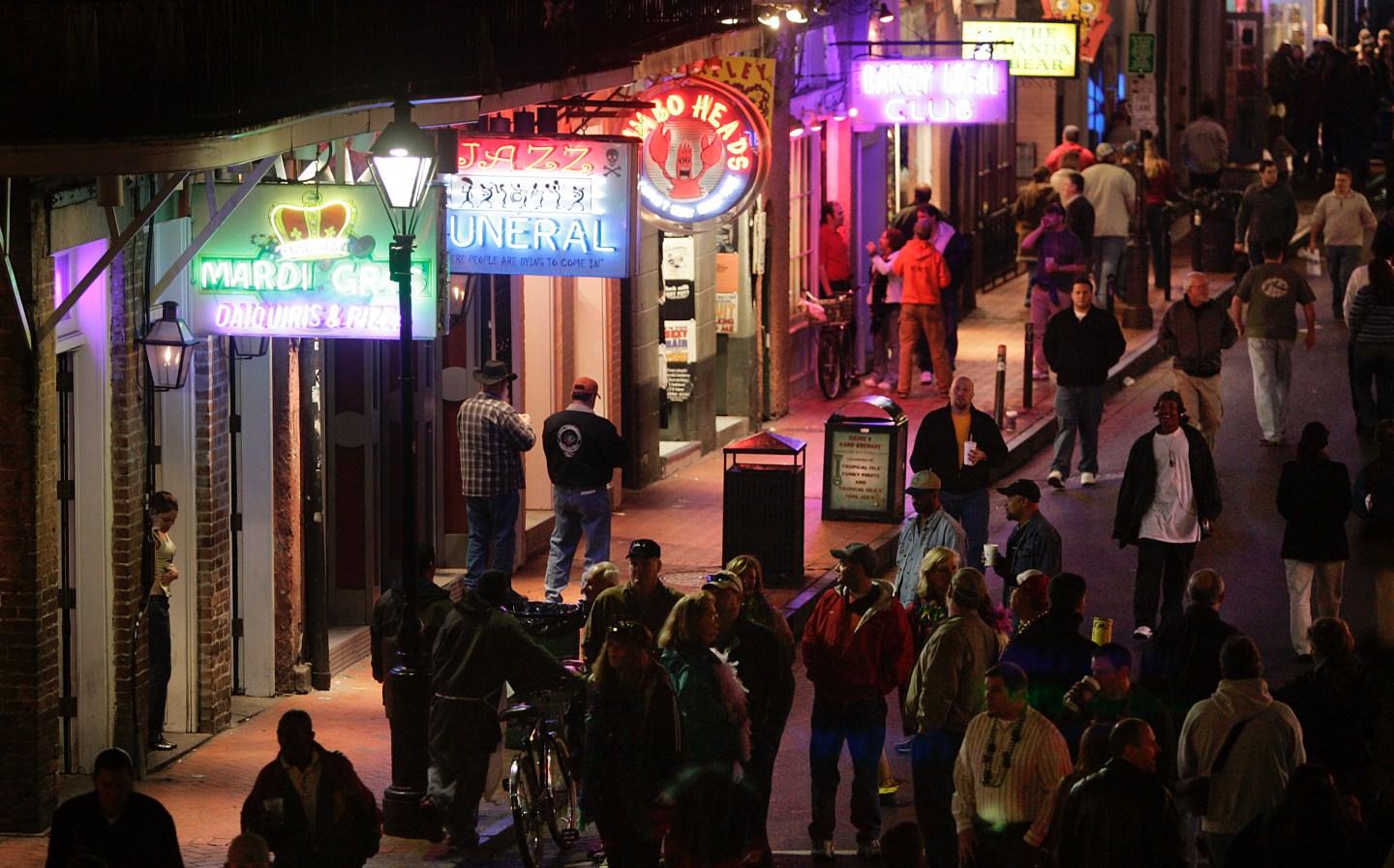 Ten years after Hurricane Katrina, New Orleans is back. That’s the message you’ll probably get over the next few days, as the August 29 anniversary of the costliest natural disaster in American history approaches. On Thursday, President Obama will meet with New Orleans Mayor Mitch Landrieu and residents who have helped resuscitate the city. The president will also deliver remarks on the region’s comeback.

When it comes to tourism, that seems at least partly true. In 2004, 10.1 million visitors spent a total of $4.9 billion in New Orleans, according to The New Orleans Tourism Marketing Corporation. That number plummeted to 3.7 million visitors, who spent $2.8 billion the year after the storm. By 2014, the number of visitors had bounced back to 9.5 million visitors and a record $6.8 billion. This year, unofficial projections call for a 3% rise in visitors.

The hotel sector has made a comeback, too, from nearly $1 billion in 2004 to $1.37 billion last year, according to hotel consultancy firm STR. Hotel occupancy is also up, from 63 percent for 2004 to 69 percent for 2014. Some popular hotels have reportedly sustained 80% occupancy levels this summer, which is typically a slow time.

The recovery extends to the port. Carnival Cruise Lines, the largest cruise operator in the Big Easy, expects to carry 450,000 passengers next year — 28% more than during the 2003-04 season. At its low point, in 2006, Carnival was down to less than 16,000 passengers after it returned to New Orleans in October of that year, the cruise line said.

But take a hard look at the numbers, and you’ll see the “comeback” almost literally means the city is at the same place it was, pre-Katrina.”We’re basically back to the same amount of hotel rooms – 38,000 – and we have gone from roughly 800 restaurants to over 1,400 restaurants,” says Mark Romig, president of The New Orleans Tourism Marketing Corporation.

There’s still work to be done to recover from what essentially is a lost decade for tourism, including persuading visitors that the TV images of a storm-ravaged city are history, or that the Big Easy is more than the hard-partying French Quarter they remember from college.

“Katrina forced us all to consider what it would be like to not get to live in or travel back to New Orleans,” says Kristin Shannon, the general manager of the Orpheum Theater.

Tourism officials are upbeat about the future. Melvin Rodrigue, the chief executive of Galatoire’s family of restaurants and a board member of the New Orleans Convention Center, says the city has “never been more vibrant” than it is now.

“There’s been a great influx of investment in the community,” he adds. “Tourism and other sectors are growing. As a hospitality industry we are united, with a more focused vision and the growth shows it.”

But Tenney Flynn, the owner of the New Orleans seafood restaurant GW Fins, says visitors to the Big Easy have long memories. “People ask if we have recovered from Katrina, like it was 6 months ago instead of 10 years ago,” he says.

In numerous interviews with New Orleans hospitality insiders, it becomes clear that while the city’s tourism infrastructure has made remarkable strides toward recovery, the city’s visitors often still think of it as a damaged destination.

“Many people think that the city hasn’t recovered from Katrina for visitors,” says David Rimmer, the president of a private aviation firm who has been doing business there since the 1980s.

Others can’t wrap their heads around the fact that New Orleans has changed, and largely for the better. The city today has a more upscale and family-friendly vibe than it did before the hurricane. For these visitors, “New Orleans only means Bourbon Street and folks walking around with red plastic cups,” says Hank Torbert, a New Orleans-based private equity investor. “No city should be distinguished by a single street and that’s not what New Orleans is either.”

A long road ahead

No two ways about it, New Orleans has lost a decade, at least when it comes to tourism. While other destinations have expanded, the Big Easy is back to square one.

The Orpheum is a case-in-point. The almost century-old Beaux Arts theater in the heart of New Orleans’ Central Business District has sat dormant since 2005, when failed levees allowed floodwaters to enter the building. Two days before the anniversary of Katrina, the newly-restored Orpheum will finally re-open. Upcoming concerts include performances by Wilco, Dwight Yoakam, Chick Corea and Bela Fleck.

“The Orpheum Theater is an inspiring story of passionate individuals resurrecting a piece of New Orleans history that was almost lost,” says Shannon, the Orpheum’s GM.

It’s unlikely the city will stay here for long. Katrina infused the city’s DNA with resilience. The city is full of stories of a hospitality industry that refused to give up after the hurricane, even when it looked as if all was lost. One of the most-frequently cited anecdotes is the story of the Red Fish Grill, the first restaurant permitted to reopen after the storm. That was no small feat for owner Ralph Brennan and his crew.

“It’s been a decade of resiliency and opportunity,” says Brennan, “of learning and accomplishment.”

For tourists like Jamila Jabulani, who visited New Orleans both before and after Katrina, there is an almost palpable sense that the city still has a way to go down that road before it is truly back, in every sense of the word. Jabulani, who works as a civic engagement consultant in Los Angeles, says before the storm, the city felt “vibrant and inviting.” But afterwards, as a volunteer helping with relief efforts in the city’s storm-battered 9th Ward, she said it felt somber, yet determined to pull through.

As the anniversary of Katrina approaches, the somber has faded, but the determination remains. Today, it is part of the city’s DNA.

Yes, New Orleans is back. But it still has a long way to go.

Christopher Elliott is a consumer advocate and travel writer.