Why these startups want you to eat bugs 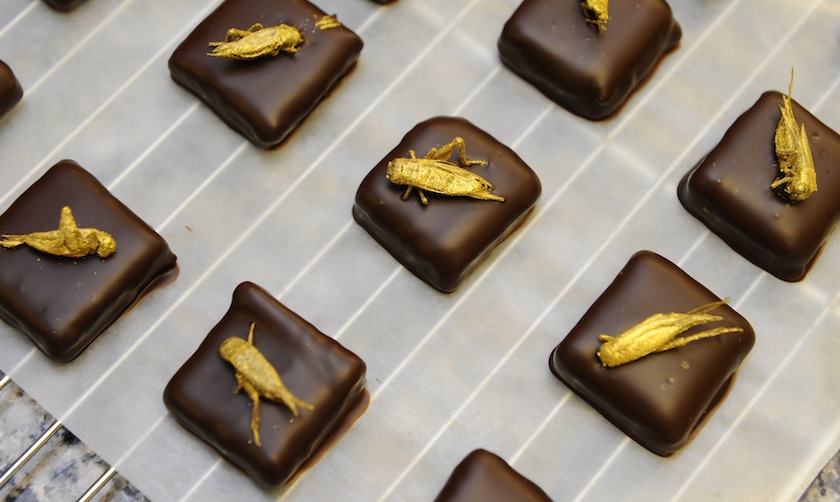 It used to be only a few specialized ethnic restaurants like Toloache in New York City or Typhoon in Santa Monica offered insects on the menu (grasshopper tacos and stir-fried silkworm pupae, respectively). Not anymore.

Now, you can order insect protein bars and cricket flour on Amazon. For those with a sweet tooth, there are cricket flour chocolate chip cookies.

In the past three or four years, more than 25 startups that sell insects as food have been launched in the U.S. and Canada, according to entomologist Aaron Dossey, PhD, founder of All Things Bugs, the country’s largest supplier of cricket powder. Thanks, in part, to a big push from philanthropic organizations, like the Gates Foundation, and the United Nations, which believe bugs could be a “super food” of the future, insect eating is growing.

All Things Bugs says its business is booming. The company sold 10,000 pounds of cricket powder in 2014 to such startups as Exo, Chapul and Six Foods. This year the company is on track to sell more than 25,000 pounds. “Revenue last year was over $200,000 and this year I plan to go over $600,000 easily,” says Dossey, below, a former research entomologist at the US Department of Agriculture.

Insect eating, formally called entomophagy, is commonplace in 80% of the world’s countries, with an estimated two billion people partaking in it worldwide. There are more than 1,000 species of eatable bugs, according to a United Nations Food and Agriculture Organization (FAO) report. Now, environmental and economic forces are compelling some save-the-planet entrepreneurs to try to convince Americans and Europeans, aka, non-entos, to indulge. “I think it’s just a matter of a couple of years before more regular people take it up,” Christine Spliid, a Danish entrepreneur based in London, told Newsweek Europe. Her company sells protein bars made of ground-up crickets. “I think people are going to see it just as an ingredient, not as a weird crawly kind of creature.”

Newsweek Europe notes that a 2014 report by New Nutrition Business projected that the edible-insect industry will be worth more than 230 million pounds ($360 million) within the next five years.

According to the UN’s FAO report, raising insects for food emits considerably fewer greenhouse gasses than raising most traditional protein sources. Insect farming does not require lots of land to expand production. Bugs are efficient at converting feed to protein, needing 12 times less feed than cattle and half as much feed as pigs or chickens to produce the same amount of protein, pound for pound.

And yes, as someone probably quipped the last time you accidentally swallowed a fly, “bugs are good protein.” True. They’re nutritious little buggers, with protein levels comparable to that in beef and milk. Crickets contain approximately 21 grams of protein per 100 grams of cricket, compared to ground beef, which contains about 26 grams per 100 grams of meat.

Because of their one-two punch—their nutritional value and low environmental impact—the UN FAO encouraged the exploration of insects as an important source of protein for the world’s ever expanding population.

And in a 2010 Ted Talk viewed 1.2 million times, ecological entomologist Marcel Dicke created a buzz when he urged entrepreneurs to invest in insect farms, though he acknowledged that North America and Europe have to get past the ick factor (his talk ended with the moderator downing a meal worm-covered chocolate ball to the collective groan of the audience).

“The yuck factor is not insurmountable,” says Dossey.

Dossey became interested in launching a business after he heard that the FAO was endorsing the idea of insect eating, and heard murmurings in the startup space. He initially received a $100,000 grant from the Bill and Melinda Gates Foundation “to develop a food product to alleviate malnutrition in children, with insect as a primary ingredient.” He then got three USDA grants to explore the properties and shelf life of insect based food ingredients as well as ways to improve manufacturing methods.

Crickets, he believes, are the most likely critter to be accepted. They’re not as gross to the eye as, say, meal worms, and easy to grind down into a powder that can be incorporated into recipes, he says. The goal is to incorporate insects into foods without the consumer actually noticing it. “The powder helps many people overcome their fears. A lot of people are open to it, as long as you’re not gnawing on a crunchy cricket,” he says.

Many of the startups devoted to insect-as-food say they are driven by an idealistic mission: to help the planet, find a healthy, more sustainable source of food, and help alleviate malnutrition in underserved societies.

One startup, Exo, which makes cricket-based protein bars, was launched by a couple of Brown University grads. They held a Kickstarter campaign that raised $55,000. The bars contain 10g of protein, and are free of gluten, grain, soy, dairy and refined sugars. In 2014, Exo closed a $1.2 million seed round from investors.

The hard part will be in convincing the average Westerner to eat insects. Last year, a supermarket chain in the Netherlands announced that it would regularly carry burgers made from meal worms and crackers made from moth larvae to provide a “healthy and sustainable alternative to eating fish or meat.” But so far, no others have followed suit. Restaurant consultants Baum and Whiteman forecasted that insect protein would be among the hottest food trends in 2015, though, tellingly, it was bottom of the list of 11 hot trends.

It certainly takes a brave American to down whole meal worm or chocolate covered crickets. But given, as Dicke pointed out, that bugs regularly make their way into our food supply, especially when it comes to processed foods, would it be that much more of a stretch to eat pasta made from cricket powder?