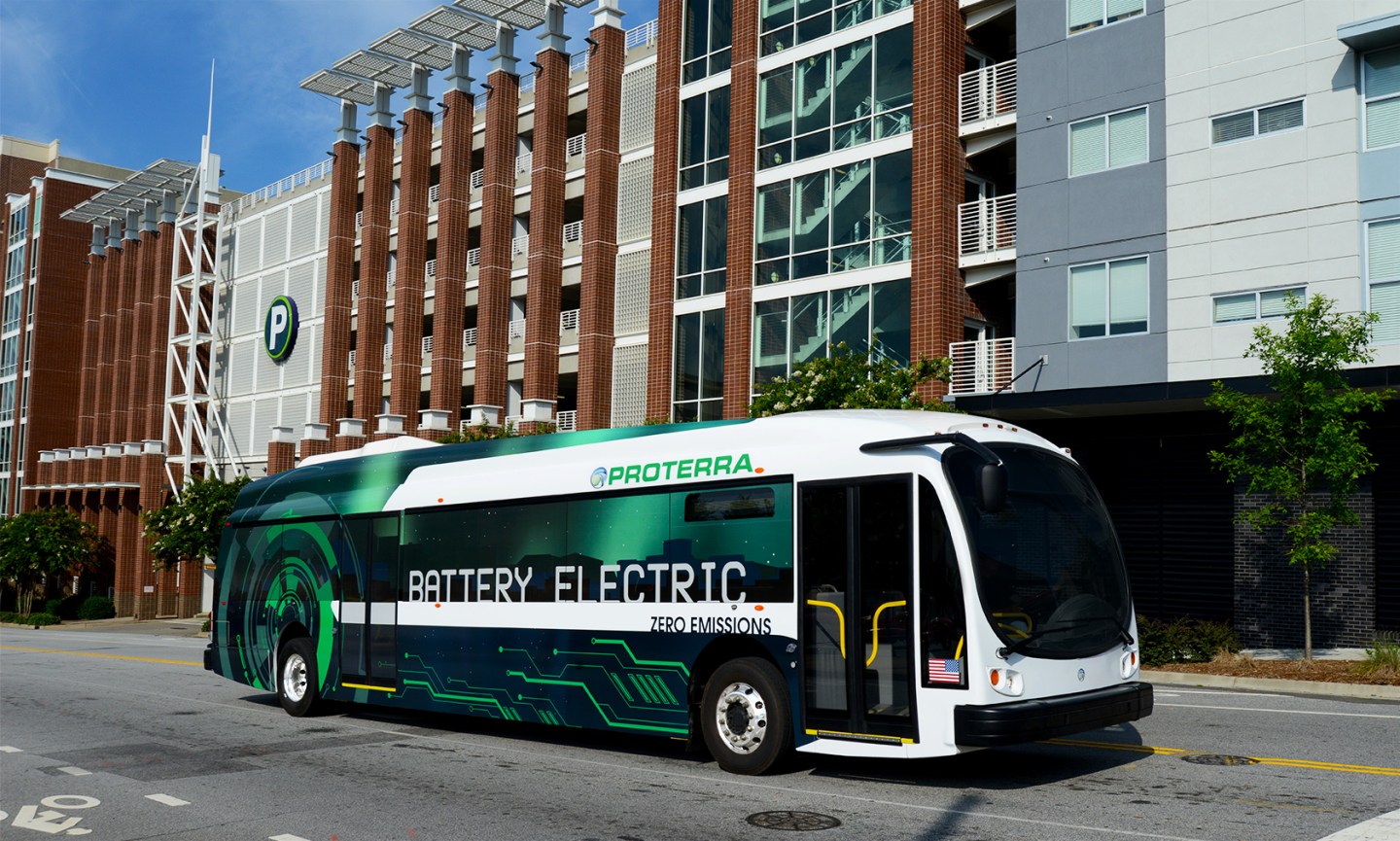 It's a bus! But it's electric!
ProTerra

It has the fastest 0-20mph acceleration ever recorded in its class. It can go 200 miles on a single charge. It can recharge in as little as ten minutes.

No, it’s not the latest cutting-edge electric sedan. It’s a forty-foot bus.

When it tested at the Altoona Bus Research and Testing Center in June, the Catalyst electric bus manufactured by Greenville, S.C.-based Proterra also set records for grade-climbing and overall efficiency, and it’s the lightest electric bus ever. That evokes the extraordinary performance of Tesla, whose P85D model now out-accelerates a McLaren F1.

The comparison is particularly apt since Proterra CEO Ryan Popple is a Tesla alum. Proterra was founded in 2004 by bus innovator Dale Hill, but when Popple joined the team, he brought Tesla-level ambition.

“The standard of product we’re looking at is a MacBook Air, or Uber’s app,” he says. “That kind of relentless product focus.”

That’s important because, believe it or not, electric buses are a competitive market. Among Proterra’s primary competitors are the Chinese firm BYD, and the Canadian GreenPower. But Popple says Proterra, again mirroring Tesla, is the only bus designed from the ground up to be all-electric.

That gets you a bus with great performance and a surprising amount of curb appeal—but also some amazing innovations. For instance, Proterra uses wireless stations at stops to recharge its circulator buses while passengers load and unload.

That has made the product, again like Tesla, appealing far beyond the crunchy-granola set. Proterra has sold buses to Los Angeles and Seattle—but also Dallas, Duluth, Minn., and Lexington, Ky.

Point being, the appeal is far more practical than ideological. A diesel bus is still cheaper up front, but declining battery prices have narrowed that gap—Popple says the battery packs for Proterra’s buses cost 60% less than they would have a decade ago.

But electric really pulls ahead on the long haul. A diesel bus costs nearly three times as much to operate per mile as Proterra’s Catalyst, partly because the stop-start nature of bus driving plays to the strengths of electric motors. And for riders, electric buses provide a quieter, smoother, and far less smelly experience. That could help boost bus ridership rates and reduce congestion.

Most of Proterra’s customers have so far electrified only small portions of their bus fleet, though—Popple says their typical order is five or six vehicles. If it stays on track, the company projects it will have 1% of U.S. market share for city transit bus sales in 2016, and a little over 100 buses in service.

To meet demand, they’re opening a second factory in California’s San Gabriel Valley, funded in part by a $30 million equity round closed in June.

Popple says that for now, the company’s main competition isn’t diesel buses, but hybrid and natural gas machines. Hybrids’ dual drive trains make them heavier, while the infrastructure for alternative fuels is more cumbersome than electric. Proterra itself started life with the intention of building a hydrogen-based hybrid, before realizing that a bigger battery would make fuel unnecessary.

Still, you can tell Popple has no patience for legacy technology.

“What really bothers us is when a city blindly re-orders 500 diesel buses. You might as well build a new coal-fired power plant right in the middle of your city,” he says.