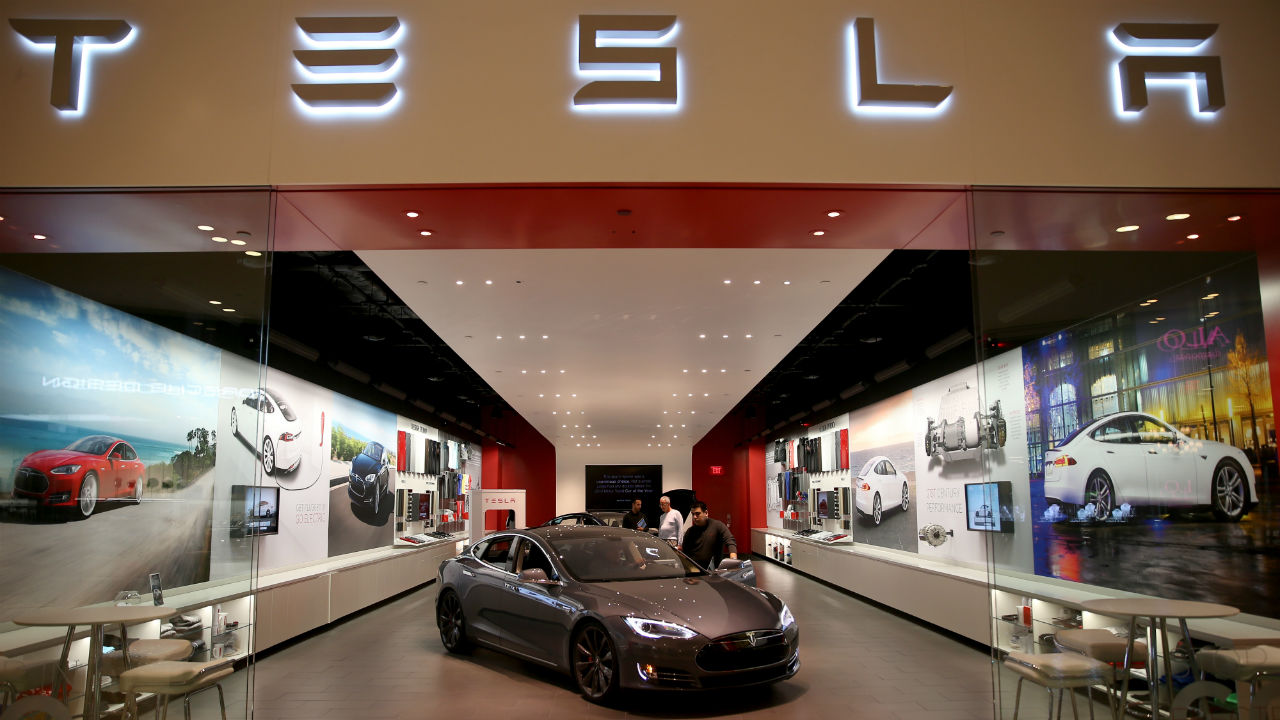 Those words, said in an almost flat monotone, were the equivalent of a teenager’s squeal coming from my usually stoic husband. But after he hit the gas during a test drive of a Tesla Model S, and we felt the power of an electric sedan that can go from 0 to 60 in about 4 seconds, he couldn’t keep from expressing his surprise.

The man doesn’t even really like cars or driving.

But I do, which was why my family had found itself in an Austin area Tesla showroom on a recent afternoon to take a spin in the all wheel drive 85D Model S (Tesla only makes the Model S for now, although the Model X SUV is coming next year for new buyers). The 85 refers to the battery and indicates the car’s range. The 85’s stated range is about 265 miles. It also comes in a slightly cheaper 70 and a more expensive 90 option.

I currently drive a 10-year-old Acura TSX that doesn’t even have Bluetooth or any fancy technology like a backup camera or parking assist. Although it is a sporty, fun-to-drive car, I’d like to get a bit more tech, a roomier back seat for my growing daughter, and an electric vehicle so I wouldn’t have to fill up the gas tank (a task I absolutely hate when it’s 104 degrees outside in Austin).

I was in the Tesla dealership for an all-electric car with the maximum range and no compromises on performance. Earlier that week I had test driven a Nissan Leaf, which was a fun introduction to electric cars, but was the equivalent of eating diet ice cream compared with the Tesla’s full fat goodness. I’m not a professional automotive reviewer, but as a tech-obsessed lady who appreciates a good car, here’s what it was like to test drive a vehicle that even Consumer Reports raves about.

Amazing. The moment we got in the car, the salesman tried to impress us with the fact that the car would remember our preferred mirror and seat positions. Another thing made it clear that this car was different: a giant touch screen that replaces the entire center of the control panel. It’s a bit much, frankly. But I had to just push all of that out of my mind while putting the car into drive. It was a bit anticlimactic because there was no telltale hum of a motor starting. Electric cars just boot up, which frankly, was the freakiest aspect of both the Leaf and the Tesla. I imagine anyone who has driven an electric car regularly will probably have forgotten that momentary frisson of self doubt as they started the car those first few times and wondered, “Um, is this thing on?”

But once you hit the gas on the Tesla (TSLA) there is no doubt. This car moves into drive like every overpowered masculine cliché you can imagine, only there’s no subtle lurch as it accelerates. It’s smooth. Suddenly we were moving forward, much faster than I intended, until I got the hang of how much power was at my disposal. Again, this was awesome.

So the power is compelling (and what elicited the exclamation from my husband), but what makes a car is the handling. The salesman, who was clearly not a fool, quickly saw my driving and switched from the normal steering into the tighter sport mode, and encouraged me to go faster around the curves. So I did. I could take corners at speeds that I could never take in my Acura, without ever feeling any risk of losing control (the Tesla is really heavy at more than 4,600 pounds, which gives it more stability). My poor daughter was sliding around in the backseat like she was at a roadside carnival ride.

After the fun of driving around a curvy campus and through parking lots we hit Austin’s streets, which are typically a misery to drive. As is my usual luck, I hit every red light and played with the regenerative braking feature that helps return power back to the battery while I brake. But that feature created an unpleasant extra “drag” while braking until I got the hang of a lighter touch on the brake pedal (I never got a great feel for it, I admit). Based on my rapid-fire take offs from stoplights and my hatred of the battery-conserving regenerative braking, I could tell that I would fall short of Tesla’s projected mileage range on this ride.

The car had so many novel features like giving the sensation of rumble strips when I crossed over a lane marker and the ability to read the speed limit signs and flash an alert indicator on the speedometer to let me know when I was going too fast (such an easy thing to do with that much power at my feet). I never stopped being aware that I was driving a computer whose software could change the height of the car to avoid potholes, to parallel park, to tweak the feel of the steering and to even add new features over time.

Tesla’s electronics are a major selling point because the company can easily update a car with new software that would let it drive autonomously. But it’s also hugely scary because no one knows the pain of glitchy software like someone who reviews gadgets for a living. If my car behaved like my smartphone or my home appliances — my house is filled with lights, thermostats and locks that are connected online — I would feel profound buyer’s remorse for spending $90,000 on a product that caused me even a moment’s irritation. After all, I could be inconvenienced for a day or two while the car is in the shop or, even worse, stuck on the side of a road.

I was less anxious about the car’s range and having to charge at only specific Tesla supercharger stations on road trips, but my husband did bring it up.

In the end, I decided that a new Tesla wasn’t in my budget. The cost of paying the higher insurance premiums and the insanely high $90,000 price for the version of the car I wanted didn’t make financial sense (especially with somewhat lower gas prices today). But the Tesla did become the only car I wanted.

Tooling around in a Tesla, even if only briefly, made me feel like I was in a rarefied club: People who drive luxury cars and own the latest technology. And while the price tag was too high, it’s possible to buy a cheaper or used version for $60,000 or $75,000. You could also stay in a pricey hotel that gives guests free access to a Tesla, and drive one for a night or two.

Yes, Teslas, no matter the version, still cost a lot of money. But ever since my test drive, I’ve been reliving the experience in my mind every time I get behind the wheel of my far more mundane car. And I can almost tell myself that it’s worth the stratospheric price to be able to accelerate through traffic so quickly or take curves at the speed they deserve to be driven. Plus, I still really hate having to get gas.