Uganda and the consequences of boom-bust farming 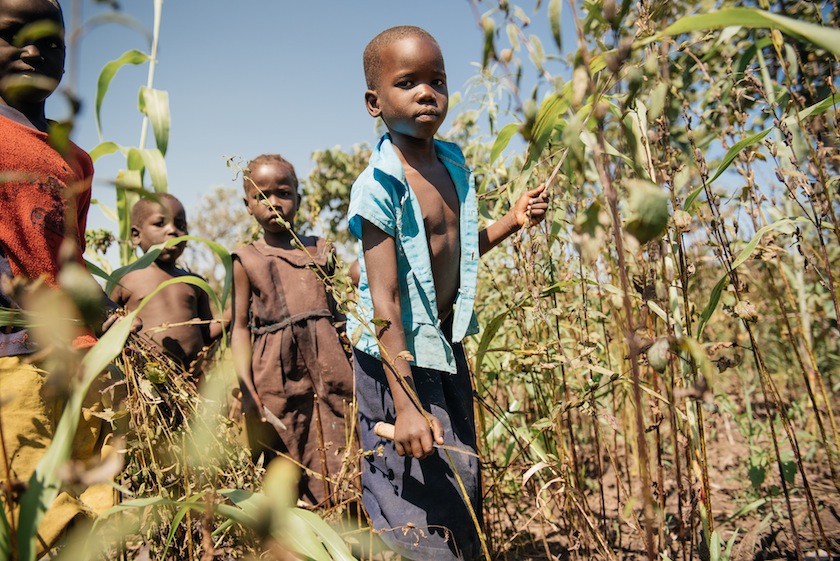 2014 December - Lamwo district, East Acholi province, Uganda. When children are on break from school (as these children, on Christmas holiday) they join their parents in the sesame fields for harvest. Sesame is an increasingly important crop in this region, both as a healthy food and as a valuable commodity. Agriculture employs about 80% of Uganda's workforce, so Mercy Corps partners with private agricultural businesses to build a more robust market where farmers have the information and knowledge they need to maximize the quality and yield of their crops as well as to successfully sell at market. Mercy Corps has pioneered the practice of contract farming, through its partnership with local output buyer, GADC. The contracts reduce the risk for famers to invest in a relatively new crop like sesame, and help them anticipate the prices they'll attain for their crops at the market. On average, farmers who have contracted with GADC report a 100% increase in their income earned from sesame.
Photograph by Corinna Robbins/Mercy Corps Corinna Robbins/Mercy Corps

“Uganda is a land of difficulties,” said Vicky Alobo. “Big and small.”

“There are caterpillars and aphids and other pests,” she said, counting on her fingers. “And weeds like star grass. We lack tools and pesticides. There is no capital, so we cannot get loans.”

Nearby, a neighbor tended neatly planted rows of beans. Alobo, 32, pointed to the grass-thatched hut where she lives with her four children.

The roads are bad, she went on. In the rainy season, they are routinely washed out, driving up the costs of supplies. And a shortage of oxen and tractors condemns many families to tilling the soil manually – by hoe, if they’re lucky, or by sticks and hands if they’re not.

While scratching out a meager living, many hope to somehow make enough to pay school fees or build a house with a sheet-metal roof.

“That is the dream,” Alobo said. “But it can be very hard to get ahead.”

When President Barack Obama wrapped up his trip to Africa in late July, he cited the continent’s economic promise. “Africa is on the move” he said. “A new Africa is emerging.”

Nevertheless, in a speech broadcast across the continent, the President noted that African growth is failing to keep pace. Africa’s population is expected to double to 2.4 billion by 2050, and economic growth, while brisk in some areas, is unlikely to satisfy growing demand for work.

“Africa will need to generate millions more jobs than it is doing now,” President Obama said.

Uganda’s uneven economic performance is a case in point. While southern Uganda has posted rapid growth in recent years, in the rural north, poverty and malnutrition are widespread. In Ywaya village, as throughout the north, most languish in extreme poverty, which the World Bank defines as living on less than $1.25 a day.

A growing chorus is suggesting that Africa does not need any more aid. One-off handouts risk increasing the dependency of recipients and can choke off locally sourced commercial activity.

Instead, some argue public money should be used to leverage private sector know-how and investment.

In some cases, this appears to be happening. In Uganda, programs funded by the U.S. Agency for International Development and the U.S. Department of Agriculture aim to spark commercial activity and help entrepreneurs get off the ground. Rather than give away grants and ploughs, for instance, aid organizations are connecting local farmers with larger businesses selling pesticides, tools, and improved seeds, which are disease- and drought-resistant. By introducing tillage companies to farmers in distant villages, tractors-for-hire are available to till fields, boosting crop yields. And loan-guarantee programs encourage banks and other financial institutions wary of issuing loans to poor farmers with little collateral to start extending credit.

According to farmers in Ywaya, these investments are revolutionizing their agricultural business. They are getting access to bank loans, investing in their farms, and reaping better harvests. And as the market matures, other large private sector players are starting to join.

“We’d always been interested in doing business in these communities, but we didn’t have any entry points,” said Gerard Sands, chief financial officer of GADCO, a large agro exporter.

In the past, Sands said, the market was too disorganized, the harvest quality too poor, and there was no one who could aggregate supplies from thousands of individual small farmers to make purchasing attractive to large commercial buyers.

In 2009, high global sesame prices encouraged GADCO to partner with Mercy Corps, a global humanitarian aid agency working on U.S.-sponsored development programs in Uganda, to start buying sesame from agricultural communities in the north. (Full Disclosure: I work for Mercy Corps.) GADCO’s entry in the market helped spark a regional sesame boom. Local sesame prices doubled. Thousands of farmers like Vicky Alobo registered with GADCO to sell sesame. Other agro companies entered the market and productivity rose. In communities throughout the north, the average farm size grew from two acres to six-and-a-half. Today, sesame seeds grown in rural Uganda are found on buns in Germany and the Netherlands.

According to analysis by Mercy Corps, daily incomes for an estimated 36,000 families grew by more than 80%, from just over a dollar to two dollars a day, well above the World Bank’s extreme poverty line.

But rising incomes have had some adverse consequences. According to farmers in Ywaya, the extra income has fueled bad behavior: fights between spouses, alcoholism, a spike in violent crime. Meanwhile, in many places, farming practices are environmentally unsustainable, exhausting the soil. This has led to itinerant planting: farmers move their fields every year, which, combined with expanding cultivation, is triggering land disputes.

Still, the worry that nags most is that the good times will end. The income boom in northern Uganda is largely on account of the sesame boom, and the turbine that has dragged incomes up could well drag them down again. A survey of farmers conducted by Mercy Corps in north-central Uganda found that sesame accounted for 83% of total agricultural sales in 2014, dwarfing all other crops.

And while local sesame prices jumped in prior years, this year they plunged by 40%. If prices continue to fall, farmers may find that they lack sufficient income-earning crops or, worse, that they have failed to grow enough food.

In the face of this, aid groups need to be fleet of foot. A crop rotation system could preserve environmental resources and reduce land conflicts. Meanwhile, organizations like Mercy Corps are working to diversify cash crops that could reduce Ugandan farmers’ dependence on sesame. Local and global demand for sunflower, Red Chilies, or Chia seeds, for instance, may provide a bulwark against a drop in sesame prices.

Encouraging farmers to save more could also help communities weather pricing fluctuations. The growth of local financial institutions creates an opening for agro companies like GADCO to directly deposit farmers’ sales income to a bank account, rather than pay in cash, which is too easily frittered away.

The experience in northern Uganda shows that using market-oriented approaches can vastly improve the lives of those in the developing world. But economic growth can also expose people to new cycles of boom and bust, price and income fluctuations, and environmental degradation. For those living in poverty, the effects can be devastating.

The trick is to use public-private partnerships to promote growth sustainably and, when the inevitable busts come, cushion the landing so that the poorest don’t end up worse off than where they started.

Keith Proctor is senior policy researcher at Mercy Crops and a visiting fellow at the Feinstein International Center at Tufts University.