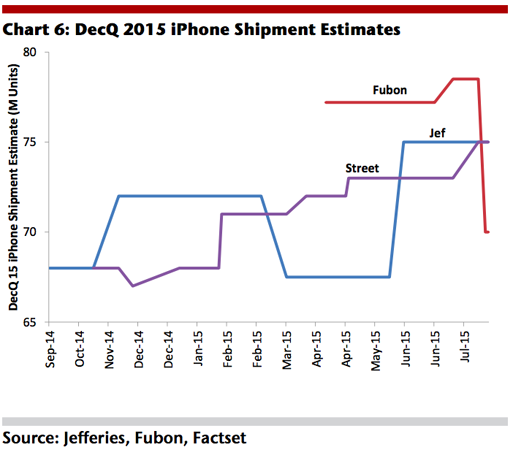 I don’t pretend to know how much Apple will be hurt by China’s decision Tuesday devalue its currency—a decision that caused the yuan to weaken in one day 1.9% against the dollar.

I do know that the killer quote in the Wall Street Journal‘s “Devalued Yuan Set to Take Bite Out of Apple”—the widely-reposted story that triggered a 5.2% drop in Apple’s share price and knocked $35.5 billion off its market value—came from the Taiwanese bank Fubon.

“China’s sudden devaluation confirmed market concerns over China’s economic growth,” Arthur Liao, an analyst at Fubon, told the Journal. “We expect weaker consumer demand for iPhones in China, and Apple may raise its product prices later if China continues to devalue its currency.”

Fubon was all over the business press yesterday, and not just thanks to Liao’s soundbite in the Journal. Fubon is the Taiwanese research partner of Jefferies, and on Tuesday Jefferies lowered its Apple price target to $130 from $135 based on an earlier Fubon downgrade of two Apple suppliers.

For the record, Fubon’s estimates for iPhone sales in the September and December quarters are outliers, well below the Street’s. And thanks to charts posted below, we know that the bank’s iPhone estimates in the past have been all over the lot: Too low in March, too high in June.

“We remain extremely bullish on China and we’re continuing to invest,” he said. “Nothing that’s happened has changed our fundamental view that China will be Apple’s largest market at some point in the future. It’s true, as you point out, that the equity markets have recently been volatile. This could create some speed bumps in the near term. But to put it in context, which I think is important, despite that volatility in the Chinese market, they’re still up 90% over the last year, and they’re up 20% year-to-date, and so these kind of numbers are numbers I think all of us would love.”

Things could get worse, of course. But as Jefferies’ Sundeep Bajikar noted, even as he was lowering his Apple price target:

“Our checks on the ground in Hong Kong, Shanghai, Seoul and Tokyo suggest iPhone is enjoying robust consumer demand.”

Is the market over-reacting to the yuan’s devaluation? That would be my guess. But what do I know?