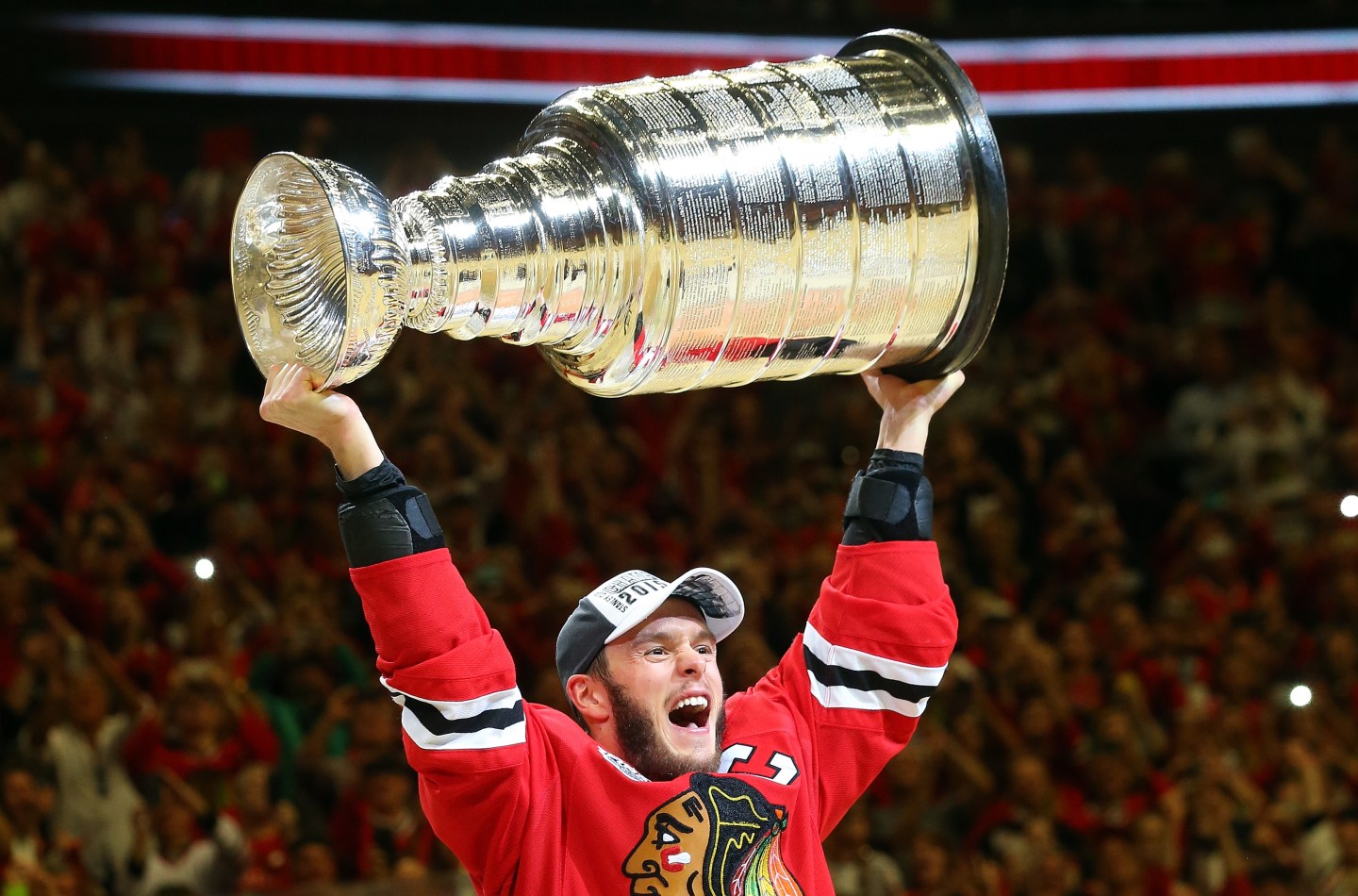 CHICAGO, IL - JUNE 15: Jonathan Toews #19 of the Chicago Blackhawks celebrates by hoisting the Stanley Cup after defeating the Tampa Bay Lightning by a score of 2-0 in Game Six to win the 2015 NHL Stanley Cup Final at the United Center on June 15, 2015 in Chicago, Illinois. (Photo by Bruce Bennett/Getty Images)
Photograph by Bruce Bennett — Getty Images

The average sports fan likely hasn’t heard of MLB Advanced Media, or “BAM,” as it’s known. The tech-and-media arm of Major League Baseball has quietly become a streaming-video giant. And on Tuesday, BAM announced its biggest deal yet: It will power all of the National Hockey League’s digital properties, from its web sites to its mobile apps to its video. It’s even getting hockey’s NHL Network, which will move its studios to MLB Network’s facility in Secaucus, New Jersey.

In announcing the deal, the NHL assembled all the key players at its New York headquarters: NHL Commissioner Gary Bettman, MLB commissioner Rob Manfred, and BAM CEO Bob Bowman. Bettman told reporters that two major American sports leagues “have never entered into a deal of this nature,” and quipped that it was “certainly something Rob and I could not have formalized over drinks at a Cornell reunion.” The deal, he told Fortune, had been in the works for years. Bettman and Bowman discussed the idea long before Rob Manfred became baseball’s commissioner.

The deal marks the first time BAM has paid a media or entertainment company for the keys to its digital kingdom. Normally, BAM is the entity that gets paid, as a “white-label” streaming technology for other companies, including ESPN, HBO and more. And BAM paid handsomely to win hockey’s business: the six-year deal reportedly gets the NHL a 7-10% stake in BAM’s tech business and $100 million a year in rights fees. (Neither league has confirmed those numbers; Bettman said at the news conference that early reports “on the economics of this deal” were wrong.) Meanwhile, BAM gets the rights to distribute live hockey games outside of their local markets, and can monetize hockey video content further by selling ads against it.

Hidden in an office above Manhattan’s Chelsea Market, BAM powers digital video for everything from Glenn Beck’s TV network, to wrestling’s WWE Network, to pro golf’s new digital service PGA Tour Live. As for baseball’s digital properties, the company-within-a-company runs MLB.com, MLB.tv, and the MLB’s hugely successful mobile apps, among other offerings. It has taken on this work very much behind the scenes, without needing much of a consumer-facing brand.

But the MLB is in talks to spin off BAM, which would result in sports fans getting to know the company very quickly. The league has met with potential investors, and owners will vote on the spinoff plan next week. MLB has said publicly the goal is to complete a spinoff this year. It is also not ruling out a potential IPO for the tech business, which is becoming increasingly attractive to investors — BAM’s tech unit did more than $100 million in revenue in 2014, according to reports, while BAM as a whole, including all its various components, saw nearly $1 billion.

For the NHL, this week’s deal is a chance to beef up its digital presence by passing it to a highly capable team with a sterling reputation. By letting pro baseball run its digital goodies, the NHL is also further cementing BAM’s reputation as the best in the business. The hockey deal is likely the first of more to come for BAM Tech once it exists on its own, assuming that plan gets carried out.

“Our owners look at BAM as a technology business that needs content to grow,” said baseball’s Manfred.