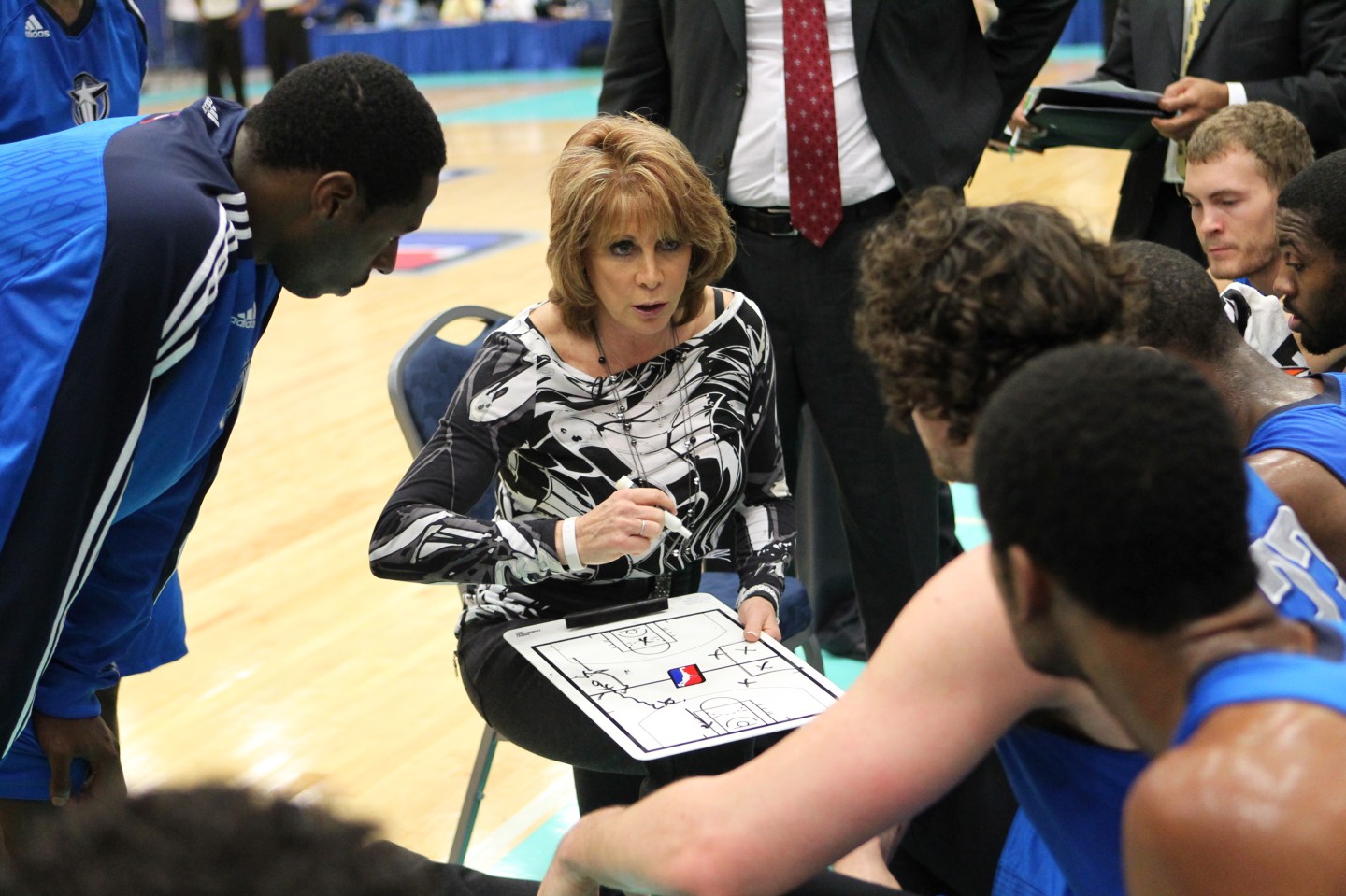 SOUTH PADRE ISLAND, TX - JANUARY 10: Nancy Lieberman Head Coach of the Texas Legends talks with her players during the game against the New Mexico Thunderbirds during the 2011 NBA D-League Showcase on January 10, 2011 at the South Padre Island Convention Center in South Padre Island, Texas. NOTE TO USER: User expressly acknowledges and agrees that, by downloading and/or using this photograph, user is consenting to the terms and conditions of the Getty Images License Agreement. Mandatory Copyright Notice: Copyright 2011 NBAE (Photo by Joe Murphy/NBAE via Getty Images)
Photograph by Joe Murphy — NBAE/Getty Images

One year ago, there were no female coaches in the National Basketball Association. Now there are two.

The first was Becky Hammon, tapped by the San Antonio Spurs in August 2014. The second is Nancy Lieberman, who will be an assistant coach with the Sacramento Kings, the team confirmed last week.

Lieberman, of course, is hardly “second” to anyone. She is a legend—not only among female athletes, but for all athletes in any sport. She played for Team USA at the 1976 Summer Games in Montreal, the first year the Olympics included women’s basketball. At Old Dominion University, she set school records and earned the nickname “Lady Magic.” She played women’s professional basketball for more than 20 years before there was a WNBA, then played in the WNBA’s inaugural 1997 season, at age 39. At that point she had already been inducted into the Naismith Basketball Hall of Fame. She went on to coach WNBA teams and, ultimately, head-coach the men’s Texas Legends, an NBDL (NBA D-League) team, from 2009 to 2011.

With a résumé like that, perhaps it’s surprising that it took this long for an NBA team to hire her.

Kings vice president of operations Vlade Divac, a former Kings player himself, told the Sacramento Bee that he and head coach George Karl, “talked about bringing her back after she helped us at Summer League. She was terrific. She brings a different dimension. I think [this] is a nice opportunity for her.”

If it feels like you’ve seen a lot of headlines this summer about women scoring jobs in men’s professional sports leagues, that’s because it’s really happening—and they are multiplying fast enough that it is practically getting hard for news outlets to keep up. In April, the NFL announced its first female referee, Sarah Thomas. In July, Becky Hammon became the first female head coach of the San Antonio Spurs’ Summer League team. Later in July, the Arizona Cardinals named Dr. Jen Welter an assistant coaching intern working with linebackers. Then, on the last day of July, the Lieberman hire. It was quite a summer for women in sports.

Lieberman is indisputably the best known, most prominent figure of all four women. In fact, she made basketball history long before Hammon did—when she landed the job as Texas Legends coach in 2009, she became the first woman to head-coach in a men’s pro basketball league.

The newly minted coach told the Associated Press earlier this month (in a story about Hammon that ran weeks before Lieberman’s own news broke, ironically) that women getting coaching jobs in the NBA, “shouldn’t be a big deal because it’s coaches coaching… Eventually, it’ll be normal.” Hammon, speaking exclusively with Fortune a few weeks ago, said something very similar: “Now that this door has been opened, maybe we’ll see more of it, and hopefully it will not be a news story.”

We’ll certainly be seeing more women getting hired in men’s leagues, and at a faster pace than even Hammon likely expected.

But at least for the time being, each of these hirings will remain a news story—and a happy one, most would say.