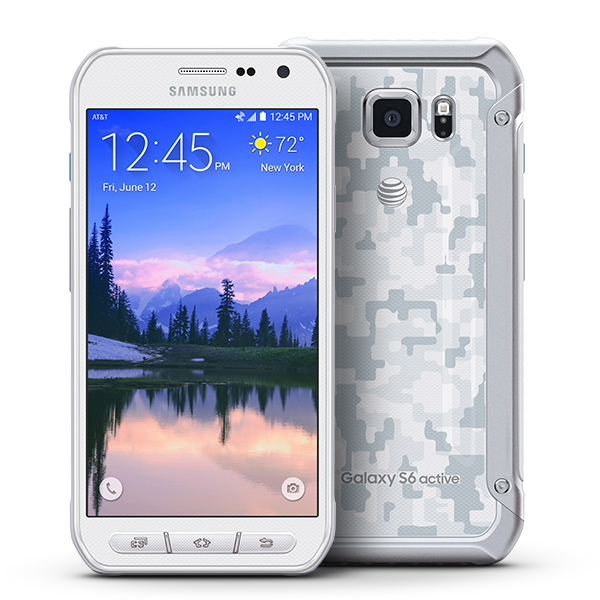 I recently had the opportunity to test out Samsung’s Galaxy S6 Active, a device that’s built to withstand water, dust, and the occasional drop from high heights.

During one week with the device, it fell out of a car, rested at the bottom of a bucket full of water, and fell six feet onto a bed of gravel. The end result? A few scratches, and little else.

The Samsung (SSNLF) Galaxy S6 Active is a more rugged version of the company’s flagship smartphone duo, the Galaxy S6 and S6 Edge.

The tech company released the $199 Galaxy S6 Active as an exclusive device for AT&T users in June. At first glance the white, blue or black camouflage back gives off the impression the device is geared towards the adventurous—and it is—but it’s also ideal for unforgiving business environments: Think distribution centers, or construction sites.

For the most part, the S6 Active offers the same user experience and features as its more attractive siblings. In addition to the plastic housing, one major visible difference between the S6 Active and its predecessor is that it no longer has a fingerprint reader, which was purposely excluded so that it could continue working after getting wet. In its place are three physical buttons, which function as a shortcut for back, home, and multitasking. A programmable shortcut key was also added to the left side of the device.

The phone’s 3,500 milliamp-hour battery is a welcomed addition to the device. My previous review of the Galaxy S6 and S6 Edge found battery performance to be downright disappointing, both of which feature a 2,550 milliamp-hour battery. With the S6 Active, I had no trouble getting through an entire day of heavy use with it.

Having already reviewed the standard S6 lineup, I found user experience was more or less identical, so I decided to take a different approach with this review. I abused the device every chance I got, within reason, of course. As Samsung reminded me, this device is built to withstand the accidental drop, since it’s certified to survive a 4-foot fall on a “flat surface.”

The S6 Active is also certified to survive 30 minutes under water at a maximum depth of 1.5 meters. After testing out the device’s “water-resistant” claim, the speakers needed a few hours to completely dry out, an expected side-effect I’m told, otherwise after a quick wipe-down you would have never known it was submerged.

The S6 Active is a tremendous phone in all its rugged glory. The screen is sharp, the camera is reliable, and it can withstand the everyday use and abuse it’s subjected to. The only potential downside is it’s exclusive contract with AT&T; a deal-breaker for some, no doubt. For those who work in a tough environment or must purchase devices for employees in said environments, the S6 Active is a worthy device.