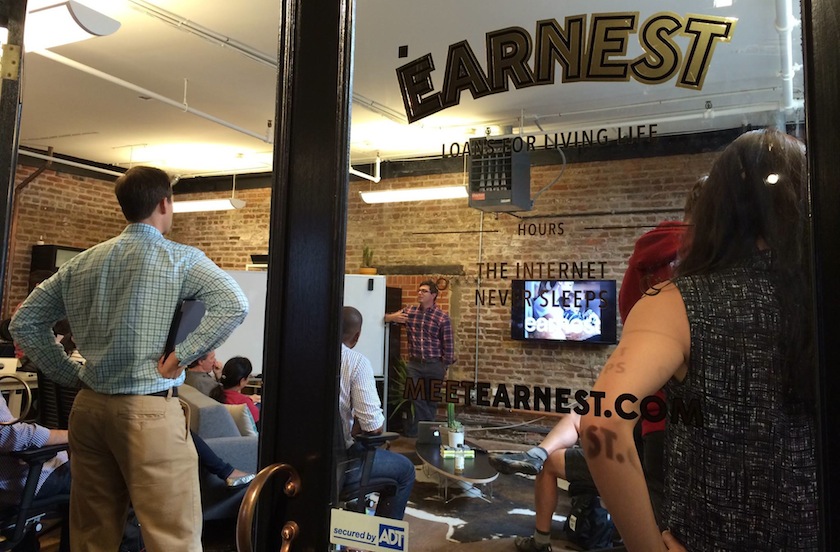 Earnest is undaunted by the competition. Beryl and company have already raised $32 million in two rounds of venture backing—their latest Series A round, which closed at the end of January, garnered $17 million and a flurry of media attention.

Alan Cooper, head of communications at Earnest, discusses the company’s growth and the struggles that come with it. He talks about how the company has grown from 40 employees to 75 since he was hired in January and how it’s nearly impossible to nail down office space large enough in the overheated Mission real estate market. Median commercial and residential rent in the Mission has been soaring, even above the outlandish city averages. Right now, Earnest has three separate spaces as it frantically searches for one central location.

The current space is typical of a Bay Area-based startup—a couple of large rooms with some couches and many Apple-littered desks. Cooper kindly asks a couple of 20-somethings with MacBooks to scram from the couches to make room for a meeting and the purpose of Poets&Quants’ visit—to get to know the seven MBA interns Earnest has hired for the summer.

The interns come from a Who’s Who of the business school elite—Harvard, Wharton, Booth, and nearby Stanford all for the same basic purpose—to learn more about fin-tech and what it’s like to work at a Bay Area startup.

The geography and culture of the area is in itself enough for them to get the gist of the scene. Earnest’s office sits next door to Lyft and down the street from Mission Cliffs—an indoor rock climbing and workout gym where fixed-gear bikes are crammed into an overflowing set of bike racks.

The interns are your typical 20-something MBA students from top business schools. The only sign of school rivalry surfaces when Gideon Silverman, a Stanford student, boasts that “Stanford is the greatest incubator in the world” and venture backing behind Stanford startups would be “one of the largest economies in the world.” Saagar Kulkarni, a Harvard MBA, was quick to defend his school’s entrepreneurial prowess, as was Megan Terraforte from Wharton.

All of the interns either come from the East Coast or another country. They’ve worked for McKinsey, Bain, Google, Salesforce, New York Life, and JP Morgan. And they are among a fast-growing cohort of MBAs seeking summer internships at early-stage ventures.

“Interest in interning at a startup is definitely increasing,” says Kristen Fitzpatrick, managing director of career and professional development at Harvard Business School. Fitzpatrick predicted the majority of Harvard first-years could be at startups, based on a Harvard survey that’s received a 67% response rate so far. “I would say it’s more of a 10-year phenomenon that continues to increase. We are still in the process of gathering this summer’s data but I think about 600 out of 900 MBAs went to work at a startup this summer.”

Startup demand for MBA talent is also rising. At Wharton, job postings from startups have gone from 130 three years ago to 400 in the past year.

That two-thirds of Harvard’s first-year class would opt to intern at a startup over the likes of McKinsey, Bain, BCG, Goldman, Morgan Stanley, Google, Amazon, Procter & Gamble, and General Electric is a wildly ambitious bet on the future. Summer internships at those blue chip companies are virtually required to get a full-time job offer after graduation. Looking askance at those opportunities is to limit one’s options at graduation. The sea change in MBA internship preferences speaks to the confidence of forthcoming graduates in the economy and the job market but also to changing ideas of what bright, young professionals want out of their careers.

Increasingly, the current generation of MBAs wants to see meaningful impact in their early careers. They want quicker access to the C-suite. They want to learn in new and uncomfortable settings. And a small, early-stage startup can satisfy all of those desires. But above all, they want to absorb as much as they can about every aspect of running a business, often in the hopes of someday launching their own startups.

“A lot of students are thinking about experimenting and doing something quite different with their summers,” Harvard’s Fitzpatrick says. “The opportunity to jump in and roll up their sleeves is really attractive.”

Eva Wei, a Wharton student, worked for JPMorgan before pursuing her MBA and is now in a marketing role at Earnest. Kulkarni, who is working in the “office of the CEO” at Earnest, had done a stint at Bain & Company. Silverman, who is working in capital markets at the startup, had been at McKinsey. Terraforte, who is busy developing partnerships for Earnest, was at New York Life, and Harvard Business School’s Sabina Robinov, who is doing risk assessment this summer, has a resume stamped by Intel and Google.

The opportunity to do hands-on work from the get-go in the heart of the Bay Area startup scene is alluring to MBAs. Terraforte, who spent her early career in traditional work environments, says there has been “implicit trust” of the interns from the very beginning at Earnest. She says the casual dress code and the fact that it’s okay to show up to work “after 7:59 a.m.” are huge pluses. Meanwhile, she says, some of her classmates spending the summer with traditional companies are “flying every night” and “at work all the time.”

Robinov says getting to work with passionate, young entrepreneurs has been a major benefit of interning at a startup. “If someone who looks over 35 walks in, you know they are an investor,” she says, drawing laughs from her fellow interns. “Most of the people my roommates are working with this summer are old—except the interns.”

On Terraforte’s second day of work, she was wondering who was the guy wasting time going around and asking everyone individually what they did for the weekend. She soon learned that guy was the company’s co-founder and CEO.

After graduating from Princeton and working for Morgan Stanley, Beryl pursued an MBA at Harvard. He couldn’t find anyone other than himself to foot the bill, and his savings weren’t large enough to pay for the degree out of pocket.

“I thought I was living financially responsibly,” Beryl says. “I had a 401k going, I was paying bills on time, had good jobs, a good education, and was going to grad school at Harvard. But I still needed private student loans to pay for that education. School was expensive, and I didn’t want to liquidate all of my 401k.”

Despite having good credit and savings, Beryl needed his mom to co-sign his student loans. “We refinanced my mom’s house, and she lent me that money,” Beryl says. “I paid her back each month and I still continue to pay her back. The massive problem was, as a borrower, I was low risk, but the lenders viewed me as high risk.”

So Beryl and Hutchinson came up with another way to evaluate borrowers—they used big data. Earnest uses an algorithm and 80,000 to 100,000 data points to lend money to students with little to no credit history. The startup reevaluates creditworthiness but also takes into account digital bank statements, credit cart history, and work pay stubs.

“What we look for is measurements of responsibility,” Beryl says. “Is your cash flow positive? Are you living within your means? Are you not accumulating a lot of credit card debt and paying bills on time? Are you not over-drafting your bank account?”

While competitors CommonBond and SoFi began their businesses with a focus on top business schools, Earnest will fund or refinance nearly anything that is considered education, from elite MBAs, to accredited undergraduate schools, and, most recently, coding bootcamps. Earnest also services the loans themselves instead of using a third-party provider.

But for the interns, what makes working at Earnest special isn’t just its “next generation” banking techniques—it’s about being a critical part of a culture that embraces change and impact. “It’s not about ping pong tables and free lunches,” Beryl insists. “It’s about truly making the world a better place.”

Terraforte, who has been working in partnerships at Earnest this summer, concurs. “I wanted to make an impact and add real value. And at a startup you don’t have an option not to do that,” she says.

Certainly there is little reason for the Goliaths of business to fear losing out on top talent. After all, there will always be intelligent and driven people—particularly those with huge student loans—looking to build careers at established companies. But the influx of interest in startups among top MBAs is changing the way career services departments are spending time and resources at business schools.

Fitzpatrick says recruiting by startups for Harvard students is year-round. Her office has made efforts to get small startups on campus as well as providing opportunities for students to travel to the Bay Area. “A lot of them [small startups] don’t have the budgeting and recruiting that larger companies have, so we make it easier and free for the organization to come on campus,” she says.

According to Fitzpatrick, career management staff at Harvard will do everything from extensive internet research—often using SpotRocket—to exhausting alumni lists to make connections for students with startups. After identifying a few target companies, Fitzpatrick says her staff trains students to pitch the value of having an MBA candidate as a summer intern.

Wharton is also helping its students connect with startups. “Unlike other schools, we have a specific model with dedicated individuals to startups in terms of relationships and placements,” says Michelle Hopping, director of employer services at Wharton’s Career Management Center.

Hopping says her office has recently created marketing collateral and cheat sheets with info about what MBA students can do for early stage startups. “Not all startups are at a point where they see much need for MBAs or they are not built on people coming from that background,” she explains. “We are really working at helping the West Coast startup understand what they can get from a Wharton student.”

Still, according to Beryl, career management offices could be doing more. “If I were dean of HBS for this one project, I would start creating long-term metrics of success,” Beryl says. “The real goal should be how many people are in the same job two years in as when they started. If your metric of success is job placement and average income, you are incentivized to funnel students into investment banks and consulting firms.”

Hopping says that students coming back from startup internships with positive results. “It’s individual for each student but there are some broad things I’m hearing,” she says. “One of the words we always hear from students before and after is impact; the ability for a student to feel they are making a tangible impact so when they come out of it they can look back and say they accomplished the goal.

“The second thing is passion. They are also getting exposure into what it’s really like at an early stage venture and for better or for worse, learning what it takes.”

Handicapping Your Elite MBA Odds: Can You Get In?