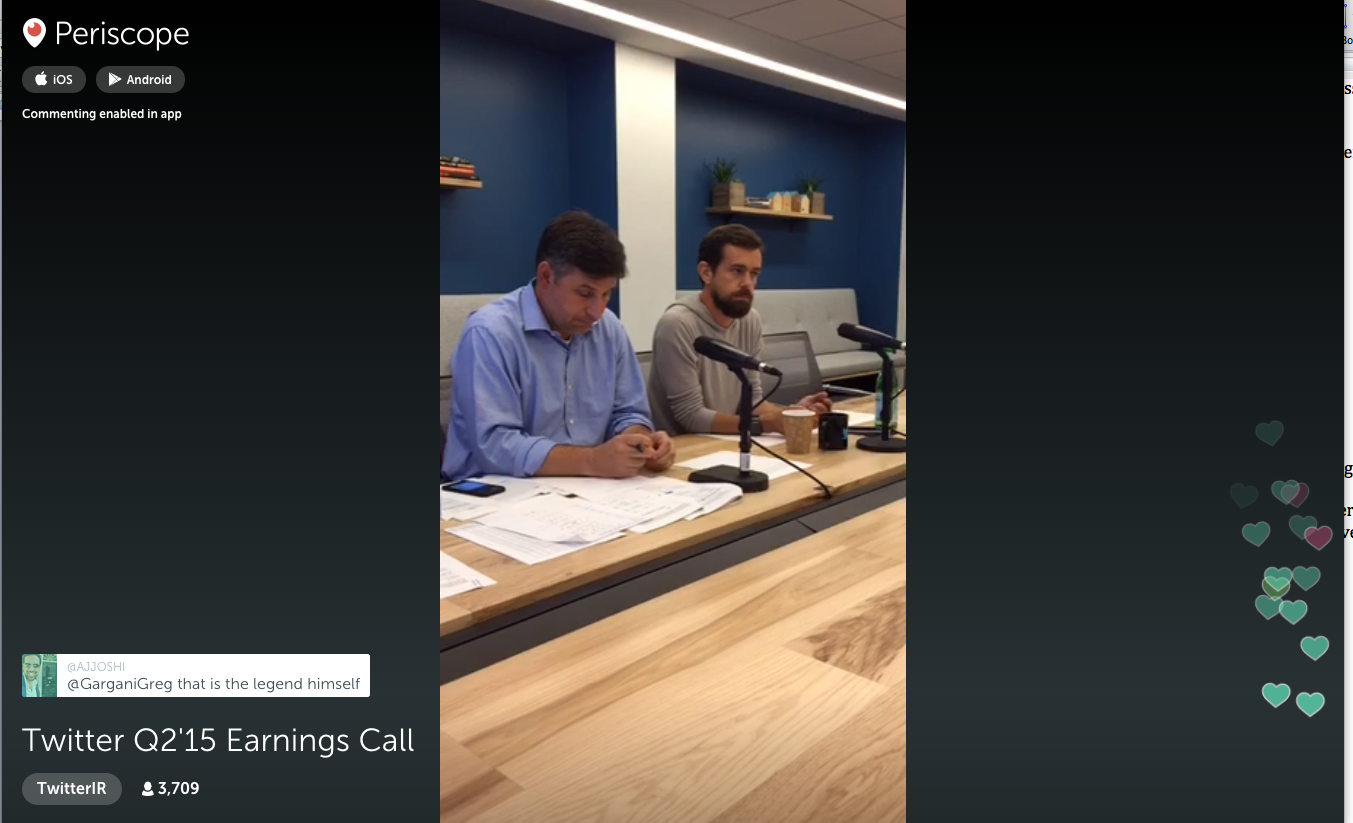 Jack Dorsey appeared at ease during his first earnings call as Twitter’s interim CEO. We know this because the company broadcast a live video of the conference call via Periscope, Twitter’s livestreaming app. Donning a hoodie and beard, Dorsey articulated a clear vision of what he believes Twitter (TWTR) can be. (Periscope users chimed in from the peanut gallery with encouragement like “NICE BEARD!” and “#GoJackGo.”)

Using Twitter should “be as easy as looking out your window to see what’s happening,” Dorsey declared. Twitter also “has to be the most powerful microphone in the world.”

The simple metaphors are a refreshing description of Twitter’s raison d’être, especially given that former CEO Dick Costolo’s confusing vision was been one of the biggest complaints about the company.

Dorsey did not shy away from harsh criticisms of Twitter. The company’s efforts to attract new users “have not yet had a meaningful impact,” Dorsey said. “This is unacceptable and we’re not happy about it.”

CFO Anthony Noto piled on: “Simply said, the product remains too difficult to use. This is both a product issue and a marketing issue.”

But the most striking statement came later from Noto, when he described something every consumer web startup should fear: He acknowledged Twitter is in the midst of a turnaround, which caused a stir on — where else? — Twitter.

“Simply put, the product remains too difficult to use,” says Twitter CFO @anthonynoto. Will take “considerable” time to turn around. $TWTR

Around that time, Twitter’s stock, which had risen in afterhours trading on higher than expected revenue, began to fall.

$TWTR shares plunge into negative territory as the earnings beat is eclipsed by the ugly reality of just how long this turnaround will take.

Conventional Internet wisdom is that once a Web company’s fortunes go south, they stay there. Attempts to revive other flailing Web 2.0 success stories like Myspace, Bebo and Friendster serve as a dire warning. Yahoo and AOL have both struggled with re-inventing themselves to be newly exciting to users. Web products and apps are now so closely aligned with our culture that they often suffer from the same faddish tastes and trends. What’s more, Web users are fickle and there’s always a new shiny thing to steal away our attention.

It’s dangerous to be in that position. If Wall Street begins to view Twitter as stagnant — or worse, as a Yahoo — the company’s standing with investors might never recover. At least Twitter was smart to acquire two of those new shiny things, Vine and Periscope, though it isn’t doing much in the way of monetizing them. (Dorsey noted in the call that there are no immediate plans to make money on Periscope.)

Twitter itself has had no problem monetizing, though that won’t matter if investors view the company as a turnaround case. Thanks to an advertising business built by the well-liked Chief Revenue Officer Adam Bain, the company grew revenue 61% over last year to $502 million. That beat analyst expectations of $481 million. Revenue growth is strong, even as profitability is nowhere in sight. (The company lost $136 million, posting a net loss of 0$.21 per share.)

Profitability would be nice, but Twitter’s biggest problem is clearly user growth. The company only added two million monthly active users last quarter, excluding people who use the site via text message. Dorsey and Noto made their best case that Twitter can crack the problem of mainstream adoption. At one point, an analyst asked whether Twitter can live up to its potential, suggesting that it might just have a smaller natural audience than originally expected.

Noto pushed back on that idea. Twitter has 95% “unaided brand recall,” which is marketing-speak for “everyone has heard of us.” But only a small portion of the people who know about Twitter actually use Twitter. And that’s where Twitter’s, and Dorsey’s, and Noto’s, and the as-yet-to-be-named new CEO’s big (scary) turnaround challenge lies.