Motorola cuts carriers out of equation with latest devices 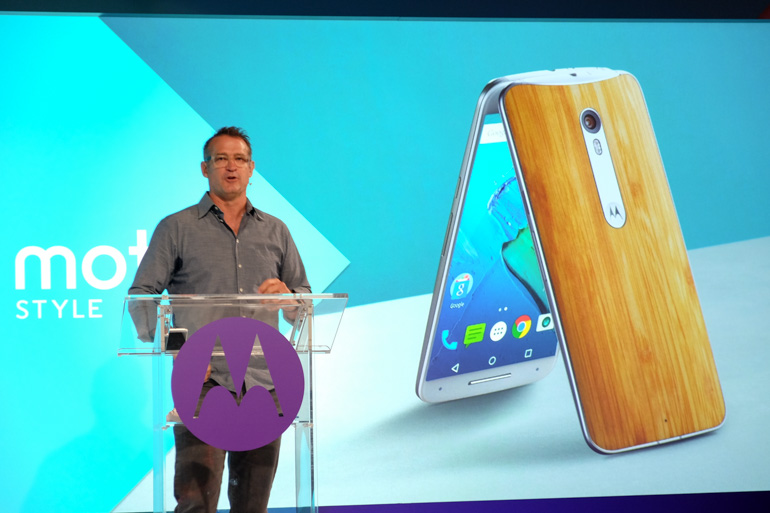 Various executives took turns walking members of the press and Motorola supporters watching at home through its latest approach to tackling the ever-competitive smartphone market.

The Moto G, which also happens to be Motorola’s best selling smartphone to date, received a healthy internal update. The revamped model offers LTE support out of the box, an upgraded 13 megapixel camera, 2470 milliamp-hour battery, a Snapdragon 410 processor with 1.4 GHz quad-core CPU, 1 gigabyte of RAM, and 8 gigabytes of internal storage (upgradeable to 2 GB of RAM and 16 GB, respectively).

Most notably, the Moto G will also be made available through the company’s Moto Maker website for the first time. The site allows users to customize colors and other details at no extra cost. Following the ever-popular waterproofing trend, the new Moto G is IPX7-rated; meaning accidental drops in the pool won’t destroy the device.

The Moto G if nothing else is a respectable entry-model device priced at $179 and available starting today in 60 countries around the world.

A pair of new Moto X devices, the Moto X Style (referred to as the ‘Moto X Pure Edition’ in the U.S.) and Moto X Play, were also announced. The Pure Edition boasts a 5.7-inch quad-HD screen, 1.8GHz Qualcomm Snapdragon 808 with hexa-core CPU (try saying that three-times fast, I dare you), 3000 milliamp-hour battery, and a “best in-class” 21 megapixel camera adorning the back and launches in September

Meanwhile, the Play offers a slightly smaller 5.5-inch high-definition screen, similar to specs found in the Pure Edition. It’s biggest selling point, however, is its massive 3,650 milliamp-hour battery. Motorola claims it’s big enough to power the device through two days of usage. Unfortunately, the device won’t be made available in U.S., with Motorola simply stating “we’ll have more choices for you all later this year.” Due to non-availability, pricing wasn’t announced at the event.

Specs and fancy features aside, the biggest takeaway from the event was Motorola’s new approach to selling the Moto X.

The company is no longer partnering with carriers in the U.S. for the Moto X line. Instead, Motorola is taking a more direct approach by selling its latest devices through its website, in addition to Amazon and Best Buy (the latter will offer the device online and in store).

The Moto X Pure Edition—the U.S.-only version of the Style—will work on any major U.S. carrier straight out of the box; meaning Verizon, AT&T, T-Mobile and Sprint. There’s no extra work or effort required on your part, just slot your SIM card into the device and off you go.

The move is similar to methods employed by ZTE, Huawei, OnePlus, and other Chinese-based manufacturers: Undercut competitors on pricing, cut the carriers out of the equation, while also including high-end specs in a device. And, just last night, Chinese company OnePlus announced plans to sell its “flagship killer,” the OnePlus 2, directly to consumers via its website for a lowly $329.

When asked about the company’s new (and unusual) sales approach Motorola President Rick Osterloh responded by pointing to the company’s long history of offering new experiences (and products) directly to customers. “For the [Moto] X the main experience has always been about Moto Maker and the online customization. And I think that, we just realized our degrees of freedom went way up if we made that be the key center of the product and put the user at the center of it.”

Indeed, Motorola has been selling direct to consumers to a certain extent for the past few years, although eliminating carriers from the equation altogether is a big deal. One can’t help but wonder just how much of an influence China-based Lenovo (LNVGY) had in making this decision.

The reason many Chinese device manufacturers have adopted the unorthodox direct sales approach is easy to understand: Companies are forced to enter the smartphone market by going direct to consumers in order to gain user traction and grow brand awareness. Motorola has neither issue, and has a strong relationship with Verizon Wireless due to its exclusive lineup of Droid devices (and AT&T as shown in the past through older Moto X models), which only obfuscates the new approach.

Will Motorola’s new approach work? It’s hard to say. Motorola made it clear after the event ended that it still has more devices left to announce this year, and it’s unclear if those devices whether or not those devices will launch with carrier partnerships.