Why Apple is so volatile 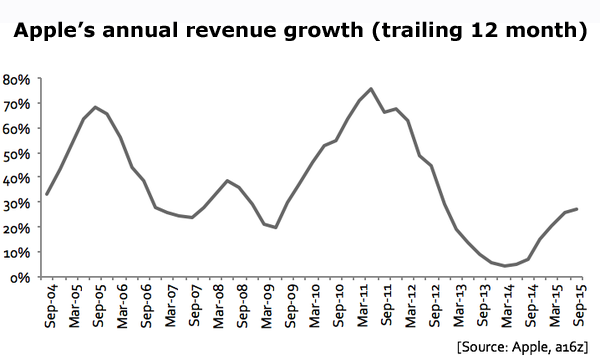 “If you’re wondering why the stock is volatile,” tweeted Andreessen Horowitz’ Benedict Evans late last night, “this is everything you need to know.”

What Evans offers his 82,000 followers is the attached roller-coaster chart of Apple’s 12-month trailing revenue growth from September 2004 to July 2015.

It’s a picture of the rate at which Apple has been able to grow its business over the past decade or so.

Evans doesn’t offer an explanation for the falloff after 2012—that would take more than 140 characters—but the decline corresponds neatly with the 2012 drop in Apple’s share price. (See below.)

“Interesting it follows a pattern,” wrote one of Evans’ Twitter followers. “It’s not ‘chaotic’.”