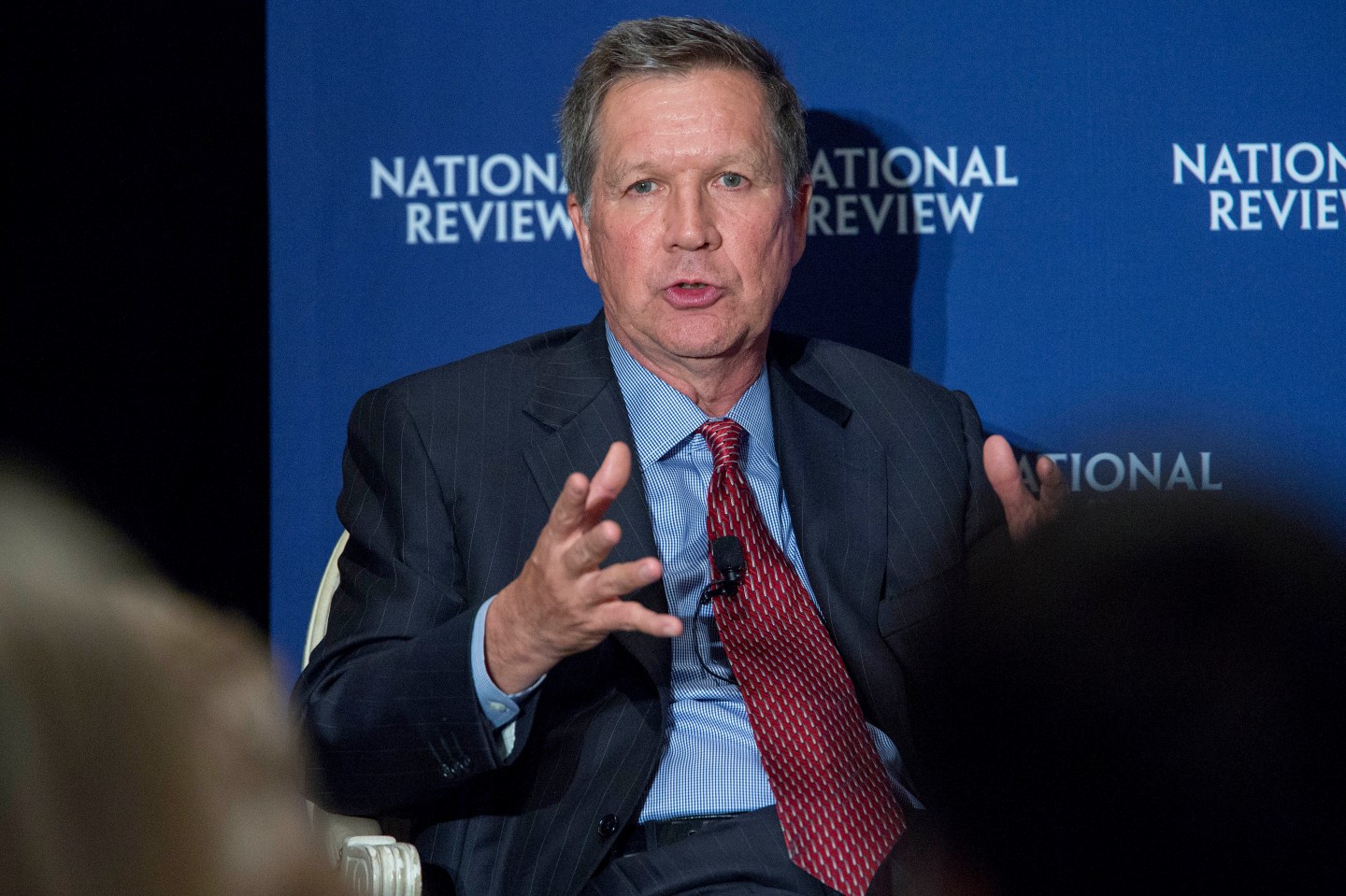 John Kasich, Republican governor of Ohio, speaks during a conversation at the National Review Institute 2015 Ideas Summit in Washington, D.C., U.S., on Friday, May 1, 2015. Kasich, who's considering a run for president, said today he's in talks with Steve Forbes about a flat tax proposal. Photographer: Andrew Harrer/Bloomberg via Getty Images
Photograph by Andrew Harrer — Bloomberg via Getty Images

John Kasich, the 16th Republican to enter the 2016 presidential election, has been portrayed as a member of the GOP’s moderate wing, mostly because of his decision to allow Medicaid to be expanded in his state under Obamacare.

But while Kasich has refused to conform to right-wing orthodoxy when it comes to benefits for the poor, he is actually setting himself up to be the vehicle for the most radical policy proposal this election cycle that actually has a chance of become law.

The Ohio Governor’s main claim to fame is that he is a seasoned balancer of budgets, first during the Clinton administration when he served as Chairman of the House Budget Committee and helped move the country from deficits to surpluses, and then again as Governor of Ohio, when he lead the state from red to black between 2011 and today. He has also, in recent months, been visiting states as part of the “Balanced Budget Forever” campaign, which seeks to launch a constitutional convention which would then ratify an amendment to the constitution requiring the federal government to “balance its budget every year.” Roughly two dozen states have active resolutions calling for such an amendment. With Republicans in control of 69 of 99 state legislative chambers, it’s conceivable that enough states will pass such resolutions to force a Constitutional Convention to consider the issue.

Despite the fact that Americans generally support the idea of a balanced budget, balanced budgets are, historically, un-American. The following chart from the Tax Foundation shows the past century or so of budget deficits and surpluses, illustrating the fact that the U.S. government is hardly ever in the black:

A balanced budget amendment would also radically change the role of the federal government, at least as it has been understood since the New Deal. Though Kasich fought to expand Medicaid in his state as part of the Obamacare health care overhaul, using his Christian faith as a reason for not forsaking the poor when he had an opportunity to help, a balanced budget amendment would eviscerate the very entitlement programs Kasich has bucked Republican orthodoxy to support.

That’s because federal deficits are necessary during economic downturns to support programs for the poor and unlucky, like Medicaid and unemployment insurance, because tax receipts fall at the same time that people lose their jobs and health insurance. Deficits are also necessary to temporarily support the economy at a time when businesses and consumers are pulling back.

In fact, the whole idea that national debt is a toxic burden that one generation passes onto the other is a fallacy, too. As you can see, our forebears were quite good at racking up debt, but the size of the national debt doesn’t affect any individual American materially. That’s because economic growth and inflation usually do a good job of keeping the debt load stable as a percentage of GDP even when the federal government consistently runs deficits.

Therefore, a constitutional amendment requiring a balanced budget — at least the kind that Kasich is after — would be a disaster, because it would hamstring the federal government and prevent it from supporting the economy when that support is needed the most. But it wouldn’t have to be. Conservative economists Glen Hubbard and Tim Kane, in their 2013 book Balance, proposed a balanced budget amendment that would require revenues and expenditures to match only over a long time period, like 10 years. A more flexible amendment could conceivably give the federal government the flexibility it needs while still reassuring conservatives that, over the long run, we will live within our means.

I’ve argued in the past that the left could support such an amendment or legislation as a means to get conservatives and compromise on other pressing issues, such as infrastructure funding or tax reform. Obviously, primary season is the time when politicians of either party tend to announce their most radical policy wishes. But it should give potential John Kasich supporters pause that he doesn’t seem to understand what a mistake balancing the budget every year would be.