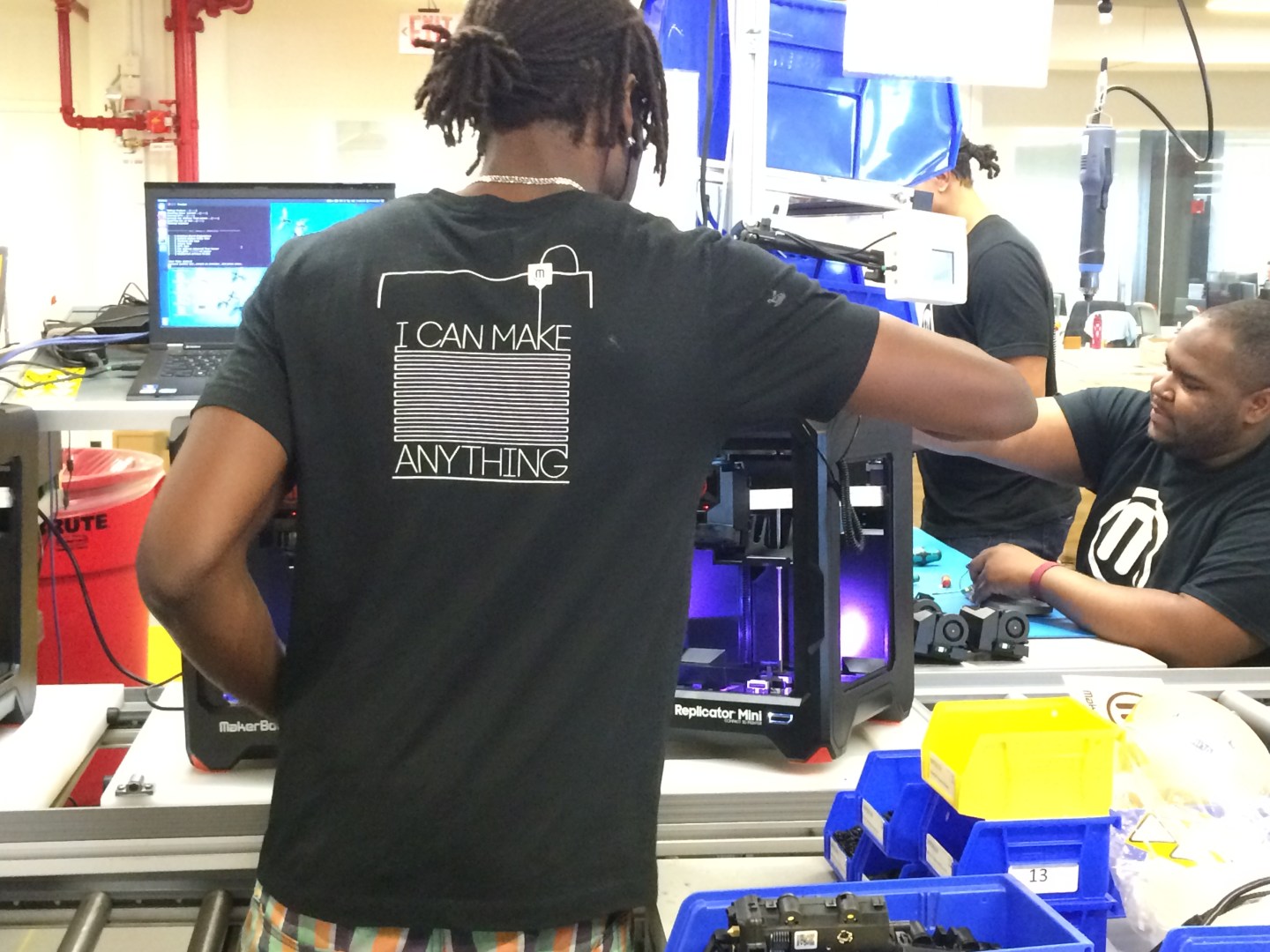 MakerBot CEO Jonathan Jaglom wants a MakerBot in every home in the U.S., as he told Fortune in May of his ambitions for the Brooklyn-based manufacturer of desktop 3D printers. On Wednesday, he unveiled what will no doubt be the biggest part of the company’s strategy for reaching that goal.

With employees, journalists, and Brooklyn Borough President Eric Adams in attendance, Jaglom officially unveiled MakerBot’s new factory in Industry City. 140 full-time employees have been working in the new factory for two months already, which brings together under one roof MakerBot’s manufacturing employees as well as those working in research and development, customer support, product testing, production, shipping, sales, and marketing. A year in the making, MakerBot’s new factory spans 170,000 square feet over three floors, and, according to the company, doubles MakerBot’s production capacity. (MakerBot won’t disclose how many of their printers they sell per year, but did say that more than 80,000 MakerBot printers have been manufactured since the company’s founding in 2009.)

“The singlemost thing that we are very proud of is that it’s all happening in Brooklyn,” said Jaglom just before a ribbon-cutting ceremony. “The launch of factory here today … is just evidence to the fact that we expect and are committed to remaining here.”

Adams piled on with the Brooklyn bravado. “People in this community, that for many years felt as though the technology transition is passing them by, now they are going to experience that,” he said. “They are going to have the opportunity to build the future using modern day technology.”

Indeed, MakerBot has no intentions of leaving what it has called home for six years—Jaglom said the company has a 10-year lease on the new factory. According to MakerBot plant manager Diana Pincus, the new factory will help streamline the company’s manufacturing process, not only by bringing multiple divisions under one roof, but also because the new manufacturing floor itself is double the size of its predecessor.

“My first desk was a piece of plywood on top of two sawhorses,” she recalled, just before leading a tour of MakerBot’s third-floor manufacturing area, where the MakerBot Replicator, Replicator 2X, Replicator Z18, and Replicator Mini are assembled. If one were to count small objects like fasteners as unique parts, Pincus said each MakerBot typically comprises several hundred parts.

The factory opening is a bit of good news in what has been a tough couple of months for MakerBot. In April, the company laid off roughly one-fifth of its workforce and closed its three MakerBot retail locations. During the company’s first-quarter earnings call in May, part of the reason for the layoffs was described by David Reis, CEO of MakerBot parent-company Stratasys.

“We did have a slowdown and we discussed it a few times before in MakerBot,” Reis said during the call. “I think we’re doing the right things to restructure the company and prepare it for future growth.”

This month, investors filed a class action lawsuit against Stratasys. As 3DPrint reported, “shareholders of Stratasys … want the company and officers to pay for not only misleading their customers, but also misleading their shareholders by knowingly putting a faulty product into the marketplace.” That faulty product: MakerBot’s Smart Extruder—the essential piece of every MakerBot that dispenses filament during 3D prints—which had an 80 percent return rate when they initially shipped, according to 3DPrint. The lawsuit names Stratasys CEO Reis and CFO and COO Erez Simha as plaintiffs, along with former MakerBot CEOs Jennifer Lawton and Bre Pettis.

“We will defend ourselves rigorously and aggressively,” said Jaglom when asked about the lawsuit during a reporters-only press conference that followed a series of factory tours.

Still, MakerBot seems bullish about the future. In a press release announcing the factory opening, the company cited research from Canalys that forecasts global revenue for 3D printing totaling more than $20 billion within five years. The company is hiring for an additional 40 full-time positions in its new factory. More than 550 stores around the U.S., including Sam’s Club and Staples, sell MakerBot printers.

“We have a lot of demand,” said Jaglom. On Friday, he will be in the production line in Industry City helping to assemble MakerBots.