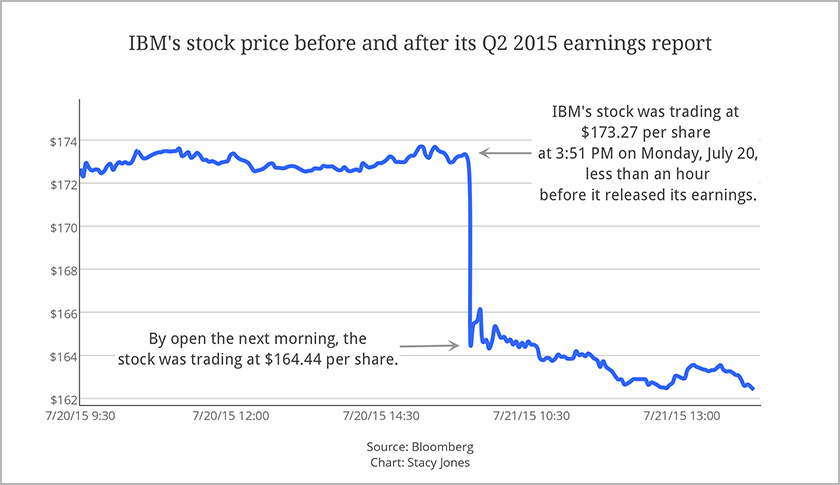 After a tepid earnings report yesterday including the thirteenth straight decline in quarterly revenue, the tech giant’s stock its tumbled nearly 6% (IBM). IBM’s shares closed Tuesday at $163.07, down 5.8%.

The poor results, along with a bad report from aerospace company United Technologies , sent ripples across Wall Street. The Dow Jones Industrial Average declined 181 points, or 1%, to 17,919.

Several analysts have chimed in on IBM’s latest earnings as well.

Wells Fargo analysts issued a report on Tuesday saying that while IBM’s recent quarter showed that the company is improving in areas like its cloud computing and data analytics business (which IBM describes as a “strategic imperatives” along with security and mobile). But those new pushes have not yet boosted its bottom line.

“The legacy business continues to weigh on IBM and the tipping point where the strategic initiatives growth drives greater profits than the declines in the legacy business profits has not occurred,” the report said.

UBS analysts also weighed in on the earnings by saying that the good news is that IBM’s free cash flow appears to be stabilizing. However, “The bad news is that software and services, the two key businesses, are seeing revenue and margin pressure,” the UBS report said.

It’s clear investors are getting antsy as they wait for the investments IBM has recently made to pay off. These investments include the company’s push to make IBM Watson technology the king of data crunching technology as well as acquisitions of cloud computing startups.

IBM still doesn’t break out the financial details of its cloud business beyond saying its revenue increased 70% in the most recent quarter. It also said sales for data analytics grew 20%. We’ll have to wait to see until the next earnings report whether the company gives more specifics.

Regarding the way the IBM breaks down its cloud business, an IBM spokesperson sent Fortune the following email:

In addition, IBM provides a number of offerings to help client design, build, and run their own private Clouds, which would include Cloud consulting, the hardware and software to build their own private cloud, as well as the implementation and migration services to get it up and running. This collection of private Cloud offerings is the difference between what we offer as a service and the Total Cloud result.

Story updated at 3:10 PM PST with IBM comments on its cloud business.

For more on IBM, check out the following video: