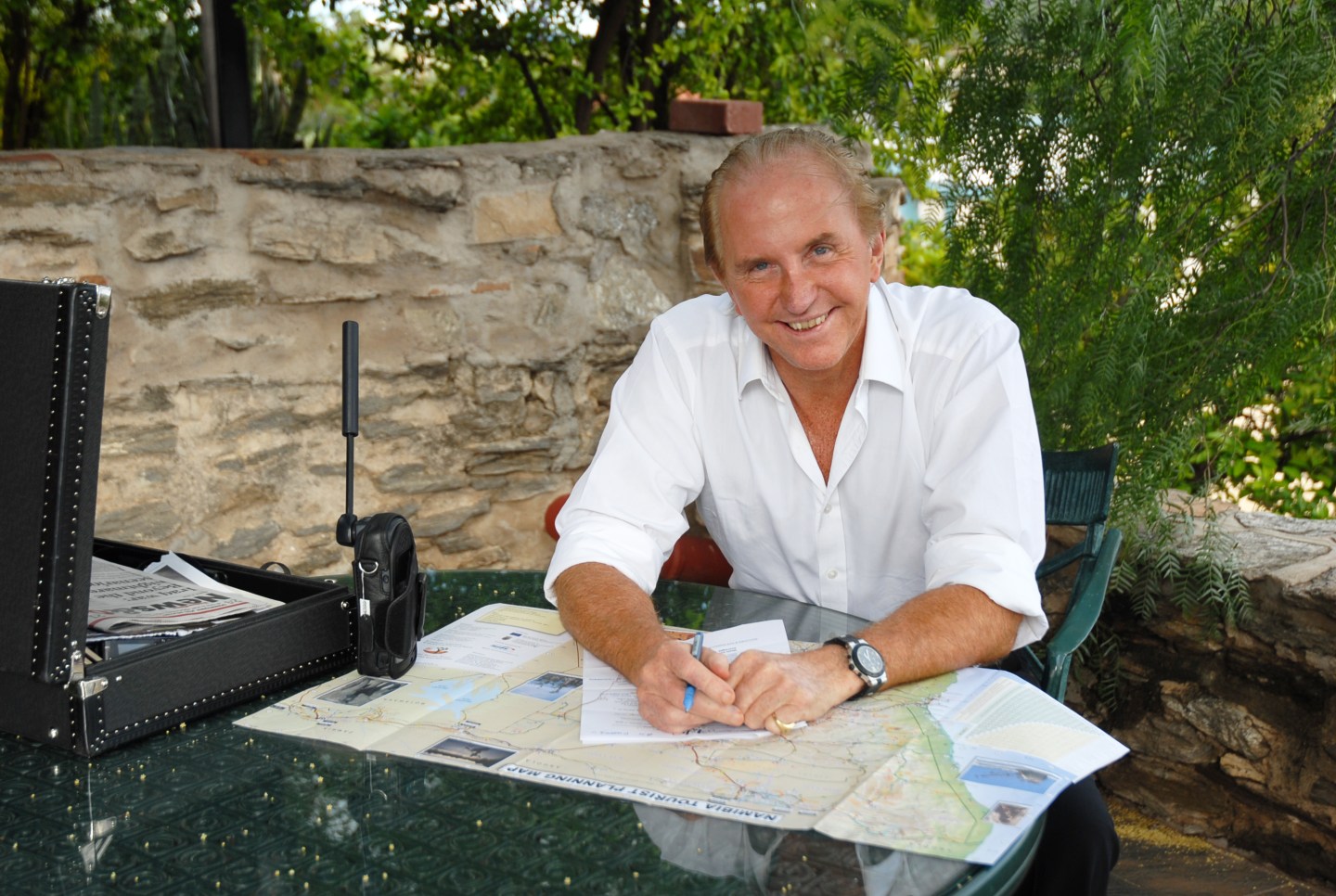 The travel company Abercrombie & Kent is famous for its luxury trips to all corners of the world, but its founder, Geoffrey Kent, 73, flies decidedly more under-the radar. That’s set to change on August 11, 2015, with the publication of Safari: A Memoir of a Worldwide Travel Pioneer, in which the Monaco-based Kent recounts his globetrotting adventures in a narrative that’s filled with as many thrills as a fast-paced suspense novel, including how he climbed Mount Kilimanjaro as a teen and rang in the 21st century with a swim in the near freezing waters of the North Pole.

Raised on a farm in Kenya, Kent was just 16 years old when he made the 5,000 mile journey by motorcycle from his home to Cape Town. He went on to train at the Royal Military Academy Sandhurst in England and serve in the British Army but itched to have a career in travel and started A&K with his parents in 1962. One of the first trips he organized was a month-long safari to Kenya, Tanzania, and Uganda. Thousands of itineraries later, A&K has grown into a $500 million business that is headquartered in London. Kent serves as the CEO and is still heavily involved in day-to-day operations.

In celebration of his new memoir, Kent spoke first exclusively to Fortune about the reason for his professional success, his perspective on luxury and how his Louis Vuitton briefcase does double duty when he’s on the road.

Below are excerpts from that conversation.

How did A&K grow to the size it is today? What do you think distinguishes you from other tour operators?

“The secret of our success is that we have our own local offices around the world. When you travel with A&K, your guide is always local, someone with an intimate knowledge of the destination. Our guides are experts whose education, field research and personal accomplishments make them ideal companions. Most importantly, they are cultural interpreters who explain local customs and offer thoughtful insights that will transform your understanding of the destination and can arrange insider access to places and people you would never find on your own.”

A&K is regarded as a luxury company, but how do you define luxury? Is it about fancy sheets and five-star service or something else all together?

“Real luxury has three hallmarks: authenticity, flexibility and a sense of well-being. Authenticity means the experience is true to its place and its traditions, incorporating elements of the past and reflecting the local culture. Flexibility refers to service that anticipates your needs and satisfies them in an unobtrusive manner. Peace of mind is the sense of well-being that comes from traveling with a first class organization staffed by professionals for whom the word “impossible” does not exist.”

Why did you make that 5,000 mile motorcycle trip from Kenya to Cape Town when you were 16?

“I was asked to leave school after being caught with a motorbike which was strictly forbidden. I had an argument with my father about my future; he wanted me to go on to Brasenose College at the University of Oxford and then work for an oil company.

“Instead I bought a tarpaulin and a sleeping bag from the Salvation Army in Nairobi and build a frame for the motorbike to hold petrol on one side and water on the other. I took some biltong (dried meat), put my food in the helmet (we never wore helmets in those days), bought a Shell map and took off, eventually riding all the way to Cape Town – the first person to make the trip by motorcycle.”

“As was often the case in parts of Africa, political and civil unrest made for frequently dangerous and uncertain passage. Looking back, I often wonder how I survived.

“But through the relationships I forged while I was travelling, I had the chance to stay in my first hotel, the Ambassador Hotel in Salisbury, Southern Rhodesia (now Harare in Zimbabwe). It was one of the grandest hotels in Africa and the mecca for travelers who wanted to be as comfortable as money can make them.

“I eventually sold the story of my adventures to the Cape Argus newspaper and bought a first class ticket back to Kenya on a steamship.”

What has been your biggest travel adventure to date?

“A voyage last October by private jet to some of the world’s most remote islands: Easter Island, Samoa, Papua New Guinea, Komodo, Sri Lanka, and Madagascar – all in just 26 days. No connections, no layovers, and no waiting in line. With just 50 guests, we were able to include events that made the journey truly unforgettable like seeing Komodo Dragons – the largest reptiles in the world – in their natural habitat. We flew from Bali, then boarded a superyacht to reach the island where they are found. Then our final night in Bali, we had dinner at the Taman Ayun Royal Temple with the King. An unbelievable procession of more than a 100 people enfolded the group as we walked through the streets and through the temple gates.”

Do you have a favorite vacation spot besides Africa?

“My wife Otavia is from Brazil, so I’ve been spending time there and learned that the Pantanal has more jaguars than any place else on earth.”

How do you capture memories from you travels?

“I am never without my Louis Vuitton briefcase. It’s a President Classeur from 1972 that’s been all over the world with me. I use it as a substitute for weights and do exercises in my tent.”

What advice can you share on how to best experience a destination?

“Keep yourself open to unscheduled possibilities. I’ve just returned from Cuba where we drove all over the island and explored remote areas that very few tourists have ever seen. One of the most interesting experiences was dining at a small family-run restaurant where the owners shared their passion for food and Cuban specialties, while discussing the challenges of running a private business in Cuba – an opportunity that did not exist for many years.”

You’re in the process of planning Intrepid Expeditions. What are these?

“My vision is to personally take no more than 20 people on journeys of 10 days or less by private jet or helicopter to the furthest corners of the earth. On these expeditions, you will be living with Emperor Penguins in Antarctica and sleeping at the South Pole, searching for the Northern Lights in Iceland, Greenland and Lapland and go on a diving expedition in Palau where you can dive with a million jelly fish that do not sting. I want to reach out and touch the untouchable.”