Will Apple rally next week like Google did on Friday? 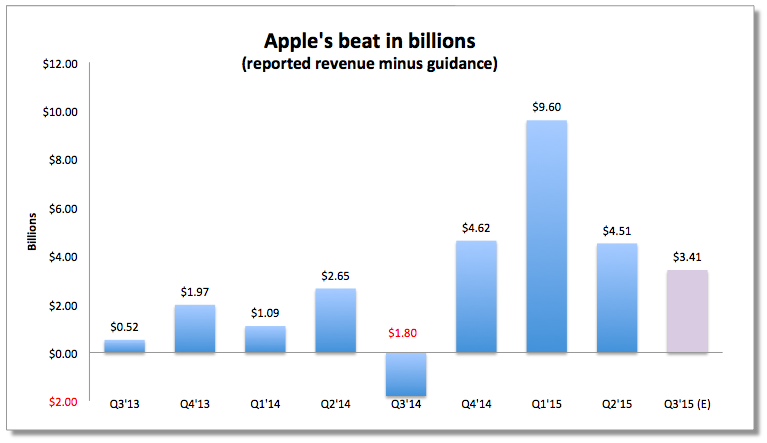 Google added $65 billion to its market capitalization Friday, the biggest one-day gain ever for a U.S. company.

Google’s rally was sparked by quarterly earnings that beat Wall Street expectations for the first time since 2013.

Apple’s earnings have exceeded the expectations of Fortune‘s panel of Wall Street analysts eight quarters in a row.

If iPhone sales were as strong last quarter as the latest estimates suggest, the odds are good that Apple will do it again next Tuesday.

The charts below show the average revenue and earnings estimates of 28 analysts in Fortune‘s panel, 15 Wall Street professionals and 13 amateurs. Note that while Apple’s earnings have exceeded the pros’ estimates eight out of eight quarters, the amateurs have come in too high four times out of eight.

Apple’s shares, which rallied last week, are still down for the quarter. Will they get a bounce the size of Google’s if they beat expectations? I wouldn’t bet on it. Google’s beat was surprise. Apple’s would be business as usual.

The company will post its fiscal Q3 results after the markets close on Tuesday. Its conference call with analysts is scheduled to start at 5 p.m. ET (2 p.m. PT). We’ll be listening in. You can too. Here’s the link.