Amid a solar boom, batteries draw attention and dollars 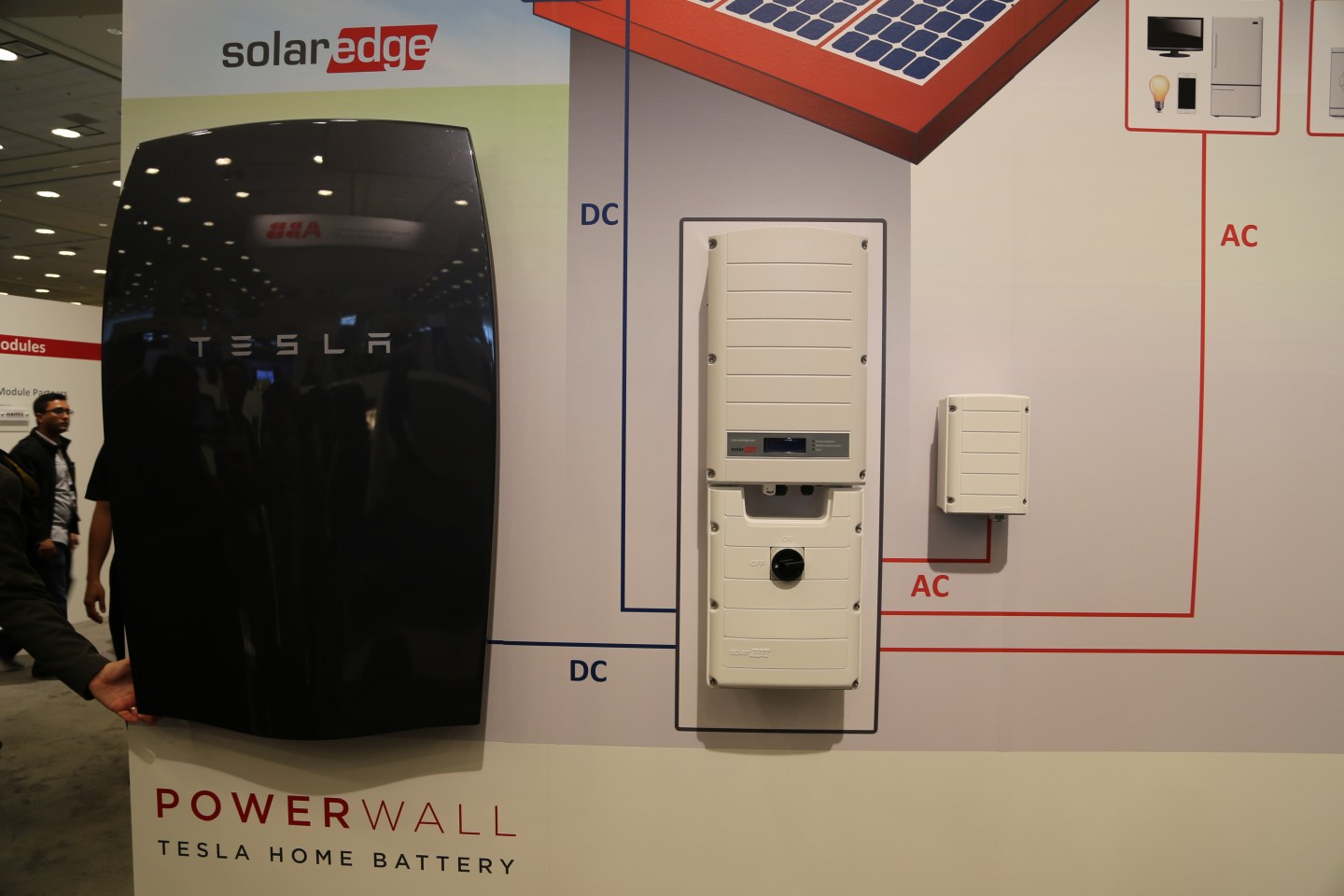 Enough solar panels are now bolted to rooftops and installed on the ground in the deserts of the Southwest to supply solar energy for over 4 million American homes. But as the solar industry booms, a growing amount of the attention, the young startups, the Silicon Valley dollars and the business deals are focused not on where that energy is coming from, but on how to store it.

One of the biggest solar conferences in the U.S., Intersolar North America, kicked off in San Francisco this week, and batteries — as they have in the past couple of years — dominated the conversation. Companies at the event showed off battery products by stacking them on the floors and mounting them to the walls throughout the exhibition halls at the sprawling Moscone Convention Center.

Attendees crammed into sessions about the emerging energy storage market, and a handful of conference goers sat crosslegged on the floor after the chairs filled up. The event organizers expect 18,000 visitors to walk through the halls over the course of the week.

As solar continues to break records in the U.S., morphing from a niche and expensive energy tech into a major source of new low cost power, batteries are simultaneously having their own breakout moment. Paired together, solar panels and cheap batteries could make solar energy finally competitive with fossil fuels. Because solar energy is variable — it’s only available when the sun is out — it needs a way to store it, and make it available around the clock.

But solar isn’t the only reason batteries are approaching some kind of tipping point. Commercial and industrial businesses, like Walmart, are looking to use energy from batteries as a way to lower their energy bills when electricity from the grid is expensive. Utilities are also interested in buying energy from big battery banks as a way to help better manage the power grid. Other groups, like building owners on islands, are using batteries to create microgrids and become independent from the larger power grid.

The key to the market is cheap batteries. Tesla’s CTO and co-founder JB Straubel delivered the conference’s opening night talk, and shared his excitement about what he sees as a swift and dramatic drop coming in lithium ion battery costs. At least two of Tesla’s Powerwall batteries — a battery pack for a home — were on display at the event by various Tesla partners.

Throughout the week, startups building battery packs and developing battery projects introduced new products and announced new partnerships. German company Sonnenbatterie, which has sold at least 8,000 battery systems in Europe, officially premiered its batteries for U.S. businesses and homes at the show. The company uses lithium ion batteries from Sony for its systems.

Many of the new battery packs are using lithium ion batteries — similar to the ones in your laptop and cell phone. But most of those that have been connected to the power grid in recent years are using lead acid batteries (like the kind that starts your car). That’s because despite that lead acid batteries have a low energy density (they don’t hold much energy per volume), the tech has long been the lowest cost, and sometimes only, battery tech available.

Battery company Outback Power has deployed a bunch of these lead acid battery systems, like the ones it installed for the Haliburton Soap Factory in Ontario, Canada. Another company Princeton Power Systems has built microgrids using lead acid batteries on Alcatraz Island in San Francisco Bay, and at the Brooklyn Army Terminal in New York.

Solar companies have noticed this battery cost drop and are realizing how important energy storage could be for the solar sector. One of the largest solar energy financiers, SunEdison, said Wednesday that it will work with battery project developer startup Advanced Microgrid Systems to install finance and install batteries for a utility in California. SunEdison also bought up battery startup Solar Grid Storage earlier this year.

Analytics, software and data will also play a key role for managing all these batteries that will be strung together and plugged into buildings and the power grid. Battery software startup Geli showed off new software that lets customers that are interested in buying batteries figure out how many, what kind, and what set up they might need. Startup Greensmith debuted new auditing software that reviews battery projects and makes sure they’re operating properly.

Many of these battery startups are backed by venture capitalists and investors. This week, Advanced Microgrid Solutions closed on $18 million in funding from actor and former California Gov. Arnold Schwarzenegger and DBL Investors, one of the first investors in Tesla, the Wall Street Journal reported.

Like many trends in Silicon Valley, the startups, investors and solar companies are trying to catch the right moment to get into the emerging energy storage market. If they’re too early, they won’t have enough customers. Too late and they’ll lose out to a flood of competitors that got there before them.

Perhaps this summer will be the long awaited breakout for batteries for buildings and the power grid. Tesla’s Staubel thinks solar panels and low cost batteries will fundamentally change both transportation and how the world uses electricity within a decade.

That Tesla, the buzzy Silicon Valley carmaker, entered the market is just another signal that the market is about to hit the prime time. The company estimates 80% of its battery sales will be for utilities and commercial businesses. Tesla could even potentially increase the number of batteries it plans to make at its huge gigafactory near Reno to meet new demand from the energy storage market.

But Tesla is also having its own effect on the energy storage industry. Not only do its batteries cost less than many of its rivals, but it can — with its high-profile co-founder Elon Musk — easily hog the attention. And that, at the end of the day, could translate straight into battery sales. At the Intersolar conference, Tesla’s new grid batteries were mentioned in nearly every presentation I listened to and were being discussed throughout the convention center.

Whatever companies, big or small, end up driving the proliferation of batteries in buildings and on the power grid, having tech that can store energy, and make it available on-demand, will completely change how energy is used. At some point far in the future we’ll look back at the electricity system and wonder how we managed without them.