Here are the smartphones the early adopters plan to buy 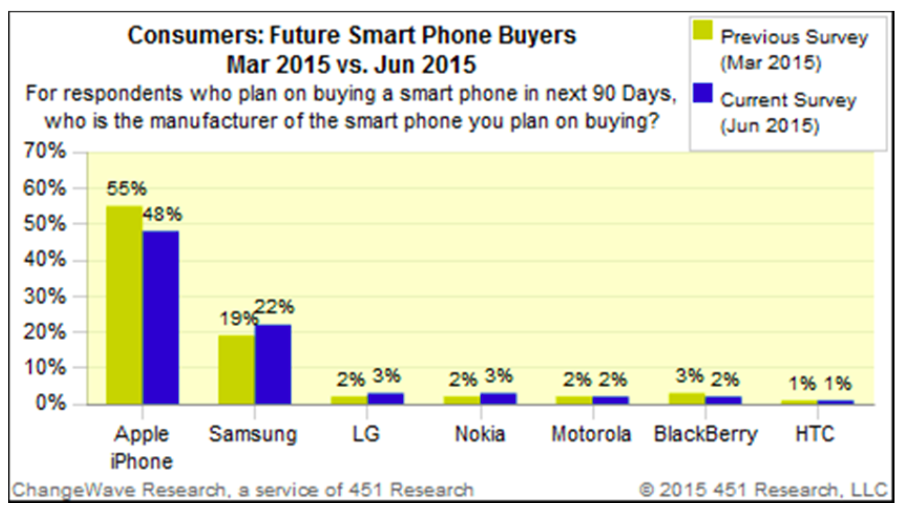 Smartphone sales in North America are in the doldrums.

As evidence, see the latest intent-to-buy survey from 451 Research’s ChangeWave, a fairly reliable indicator of which way the wind is blowing.

Apple and Samsung still dominate the field, with Samsung on an uptick and Apple on a down.

But don’t be fooled by the bar charts, says ChangeWave Research director Andy Golub. He offers as context two fever charts (below) and these observations:

—While Apple is down, it is coming off a very successful iPhone 6/6 Plus launch that held demand at historically high levels. The more accurate comparison is to compare the latest results to the June 2013 survey just prior to the iPhone 5S/5C release (48% Jun ’15 vs. 44% June ’13). In addition, the Apple Watch is likely diverting some attention.

—For Samsung, the June ’15 survey represents the third consecutive uptick for Samsung—and the first June increase in three years.

—Nonetheless, the typical bounce back that the data normally shows for Samsung in the December and March surveys had been dampened by the successful iPhone 6/6 Plus launch.

Below: Four years of intent-to-purchase surveys.