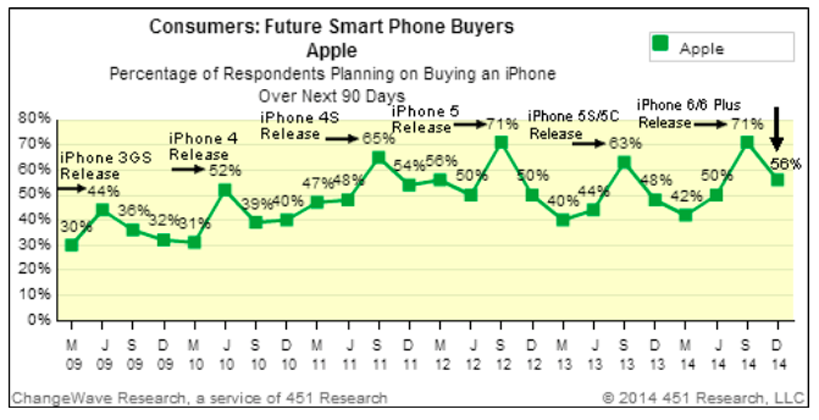 Better that one in two (56%) of the respondents in a December survey of early adopter types who plan to buy a smartphone in the next 90 days say they’ll get an iPhone.

“This is the highest level of Apple demand ever recorded in our smart phone survey three months after a major new release,” said Andy Golub of 451 Research.

Samsung is beginning to bounce back, he adds, “after a big decline last quarter due to the iPhone 6 and 6 Plus launches.”

The survey also found growing demand for jumbo phones. Three-in-five (60%) would-be buyers said they wanted a 5 inch screen or larger — a 7-point jump in phablet demand since September, and double the level 15 months ago.

The survey was taken in December. Of the 4,126 Changewave members who responded, 16.1% said they were in the market for a smartphone. The sample is small and hardly representative of the global market, but 451 Research’s ChangeWave surveys have proved in the past to be good early indicators.

UPDATE: More fuel for the iPhone fire Friday morning from a separate CIRP survey of 500 Americans who activated a new or used phone in last three months of 2014:

The strength of the September 2014 launch of the iPhone 6 and 6 Plus fueled Apple’s dominance in US mobile phone sales this quarter,” said Josh Lowitz, Partner and Co-Founder of CIRP. “Apple had virtually double the sales of Samsung, and five times that of LG. No other brand accounted for as much as 5% of US sales. The Amazon Fire and Blackberry smartphones registered slight share, which we attribute to random sample fluctuation as much as actual sales.”

“By every measure, Apple’s 2014 phone launch was a success,” continued Lowitz. “iPhones drew from loyal Apple customers, with 86% of buyers upgrading from an older iPhone. Samsung and LG saw far lower loyalty rates, with 25% of Samsung owners and 18% of LG owners who activated a phone in the quarter switching to an iPhone.”