Is it too much of a stretch to market sake to yogis? 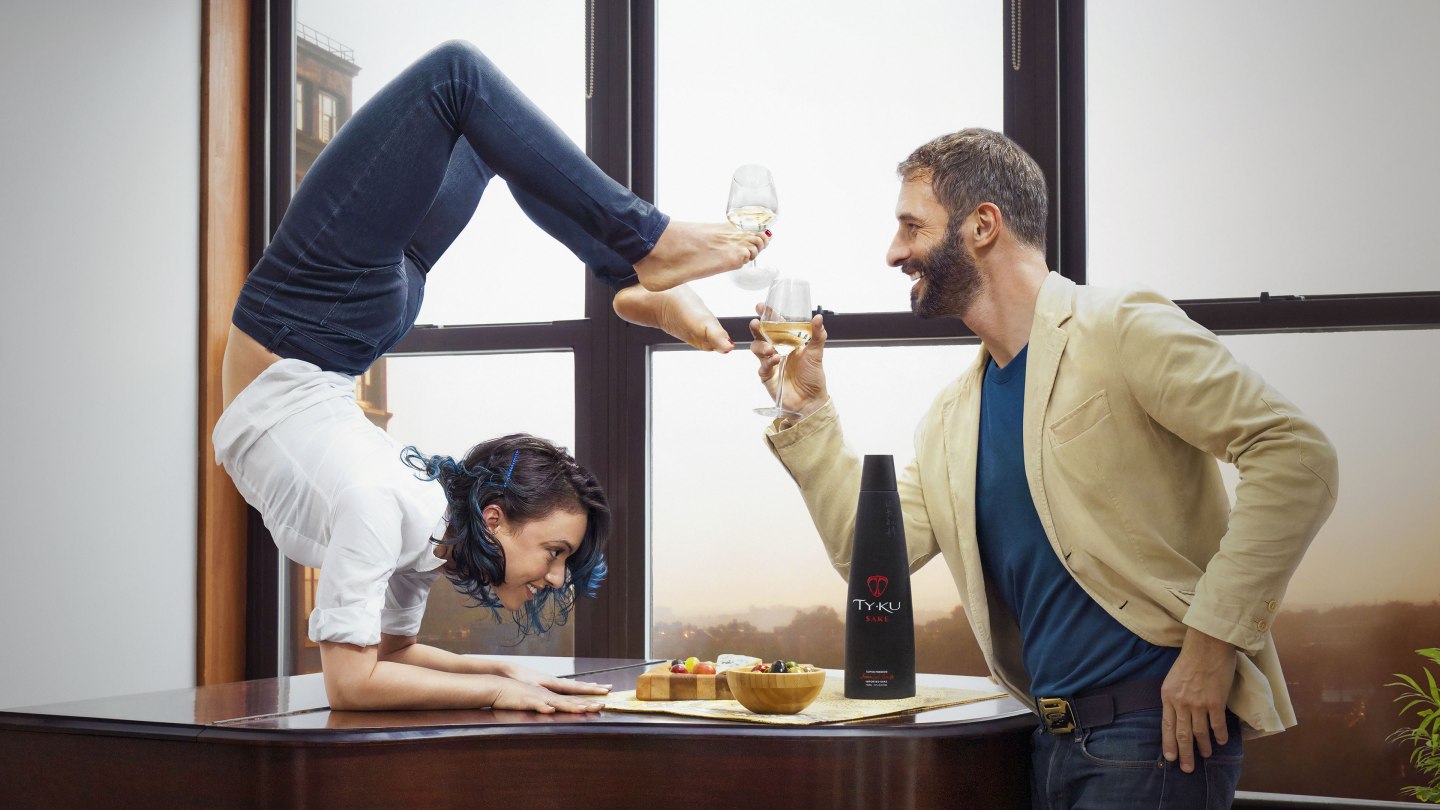 After practicing that downward-facing dog and warrior pose, you would think yoga practitioners would be clamoring for a glass of water. One alcoholic beverage maker is hoping a sip of sake will soon follow.

Davos Brands, the company behind TY KU sake, says there is a way to balance interest in sake with a desire to practice yoga. The company has been aggressively marketing its brand to the yoga community this year, including advertisements in Yoga Journal magazine and a huge billboard in Times Square during a day of free yoga classes that was held in the middle of Manhattan last month. Yogis may seem like an unusual target audience for an alcohol brand, but some research suggests the campaign makes sense.

While about 55% of U.S. adults consume alcoholic beverages, among yogis, that figure is about 75%, according to Davos Brands vice chairman Guillaume Cuvelier.

“At first I thought it wasn’t a good idea,” Cuvelier said when Davos first began to conceptualize the advertising campaign. He figured instructors and yogis were more into meditating and keeping their temples free of vices like alcohol.

But the yoga community is far more vast and diverse than it was when the practice first began to make inroads in the U.S. in the 1960s. It is estimated that 24 million people in the U.S. practice yoga, and that crowd is often seen as more affluent, with more disposable income than the broader population. That explains why companies like Lululemon (LULU) have reported fast growth and strong sales on the initial idea of selling premium-priced wares to yoga-obsessed athletes.

TY KU remains a fairly small brand in the broader alcoholic beverage world, where beers, spirits, and wines vastly outsell sake. But sales of TY KU have been rising sharply, posting annual double-digit gains, including a 22% jump in 2014, according to Chicago-based market research firm IRI.

The company’s sake is now being steered by Cuvelier, who is well known in the industry for creating the Svedka vodka line, which was sold to Corona and wine maker Constellation Brands (STZ) in 2007. Cuvelier joined Davos last year.

But will the ad campaign be a hit with its intended audience? Sales for TY KU continue to increase this year, though it isn’t clear if that’s because of the yoga-focused ad campaign. And the company won’t say how much it is spending on this effort, though it has committed to yoga-focused ads for 2016.

Yogis seem open to the idea. New York-based yoga educator Leslie Kaminoff said that while he’s mainly “a tequila guy,” he does enjoy sake. And unlike some yogis, he doesn’t mind that more and more companies are advertising to the yoga community.

“Yoga has been broadly embraced, people who practice and teach yoga enjoy drinking from time to time,” Kaminoff said. “And I happen to be one of them.”